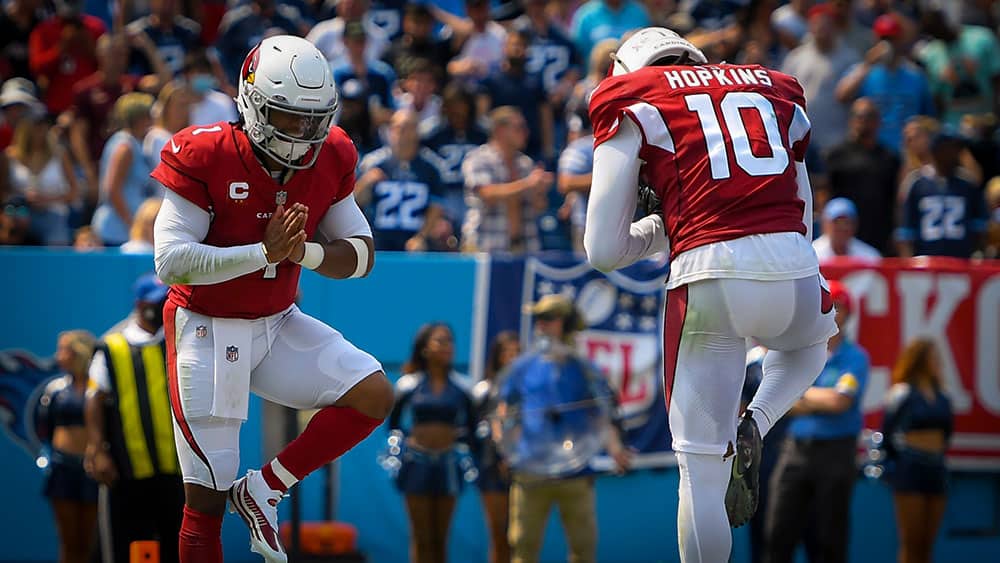 With sports betting going live and the Cardinals putting on a show against the Titans in Week 1, many Arizona bettors are looking for ways to get action on their team. We think the season win total presents decent value despite jumping up a full game after week 1.

One way to look at placing this bet at 9.5 rather than 8.5 is that the current win total simply prices in the fact that the Cardinals won a game they weren't projected to. The game with Tennessee closed with Arizona a 2.5 to 3.5 point underdog.

If you think the odds should be adjusted off of just how good the Cardinals looked in week 1, that has yet to be priced into their 2021 win totals odds.

Looking at the schedule, a conservative estimate would have the Cardinals winning 3-of-4 against the NFC North, beating Jacksonville, Houston, and Carolina, and going .500 in the NFC West. That gets them to 10 wins with games against Cleveland, Dallas, and Indianapolis that will be close to pick'em odds.

All in all, the Cardinals greatly improved their roster through free agency this offseason. They made it very clear that they are content with Kyler Murray being their franchise quarterback and they are now willing to spend the money to put the necessary pieces around him to make a real push towards contention.

The Cardinals had a rather busy offseason this year, but they came out looking like a much better team than they were last season.

The Arizona Cardinals will only go as far as their offense can take them. Kyler Murray is poised to have yet another great season with an incredible receiving core around him. Along with this, this could be a big breakout year for Chase Edmonds. He did not get as big of an opportunity to put his talents on display last season as he shared carries with Kenyan Drake. However, with Drake on his way out and James Conner on his way in, Edmonds should be the workhorse back eating up almost all of the carries.

Edmonds also is a back that can be featured in the receiving game. He has great hands and is very shifty after the catch. While he will by no means be a top-five back in the league, the Cardinals rushing attack will be in much better hands with Edmonds as the featured back.

The Cardinals’ receiving core is shaping up to be one of the best in the league. They will likely run a rotation of DeAndre Hopkins, A.J. Green, Christian Kirk, and Rondale Moore. There is not much to say about Hopkins, he is one of the best receivers in the league and will continue to be a top-tier receiver this season.

Green should have a bounceback season with a better team and quarterback around him. A change of scenery and playing on a contending team could be revitalizing for Green’s career. Kirk may be the odd man out this season, with the Cardinals making so many additions at the receiver position, if he is not on top of his game, he may find his way out of the main rotation and off of the team when his contract expires. If Moore gets enough chances this season, he could prove to be an incredible weapon for the Cardinals coming out of the slot.

The trade to add Rodney Hudson along with drafting Michael Meyers to the team should greatly improve the Cardinals’ offensive line this season. If Kyler Murray has enough time in the pocket, he can be an elite passer. These additions should be enough to propel the Cardinals to have a top ten offensive line in the league.

Murray has more than enough help around him on the offensive side to finally have a winning season in Arizona for the first time since 2015. It will come down to avoiding injuries and how well the new additions mesh with the team.

The defense will be the x-factor for the Arizona Cardinals this season. If they are able to mesh well together and play to their capabilities, the Cardinals could be true contenders to grab a wildcard spot. Losing Patrick Peterson is something that will hurt the Cardinals in more ways than they think. Peterson was a staple of the Cardinals, losing him and Larry Fitzgerald leaves a lot of leadership to be desired in the locker room.

While this is something that players like Murray and J.J. Watt can pick up the slack of, having players that have been in the organization for years and have been through the entirety of the Cardinals’ rebuilding process is always a good thing to have with so much youth on the team.

The Cardinals should have a very solid defense this season. This was something that they focused on in the draft. While there is a lot of youth on this side of the ball, especially in the secondary, they should be able to hold their own.

The biggest addition on this side of the ball is the signing of J.J. Watt. Many were puzzled why he chose to sign in Arizona. However, if he is able to play to the level that is expected of him along with lead the young players to be the best they can be, the Cardinals could have a very good defensive unit this season.

Cardinals’ Win Total Bet
Following a dominant week 1 performance, the Arizona Cardinals now have a win total set at 9.5 wins this season. At their full potential, they are a team that could easily hit this mark, especially with the regular season being 17 games this season.

If they did not play in the NFC West, it would be an even easily bet to place, however, they are stuck in this division which is at the very least the second-best in the NFL.

The Cardinals have a very tough schedule this season. Facing the Los Angeles Rams twice, San Fransico 49ers twice, Seattle Seahawks twice, Tennessee Titans, Minnesota Vikings, Cleveland Browns, Green Bay Packers, and Dallas Cowboys. It would not be out there to think the Cardinals could easily win 10 games this season unless there are any major injuries.

Given the way the Packers, Vikings, Lions, and Bears all looked in week 1, it is certainly possible the Cardinals sweep the NFL North. Given they have already beat the Titans, and will likely beat the Jaguars in Week 3, that gives them 7 wins out of conference. We expect Arizona to be able to reach .500 in the NFC West, which gives them 10 wins on the season. Take the over 9.5, and deal with the fact you didn't get it at 8.5!