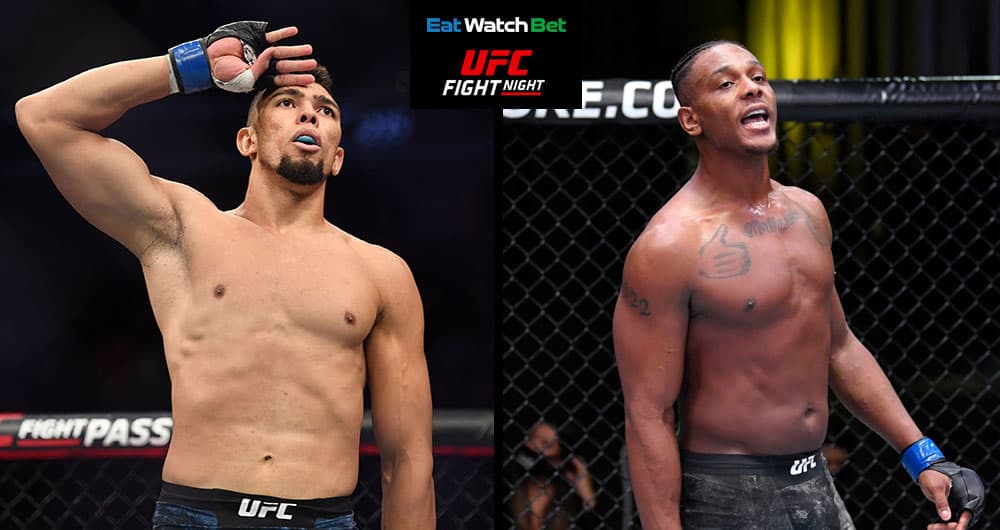 We scored another win with our Parlay of the Night last weekend with Casey O’Neill coming through easy like we expected her to in sending Roxanne off into the sunset... Albeit with a battered face and a record-setting significant strike mark from O’Neill.

Adesanya pulled out a unanimous decision as he picked apart Whittaker in the rematch. We also hit our prop pick, with Knight and Grishin going the distance, but missed our underdog play, which in hindsight should have been on Tuivasa.

We move on though and have another fun night of fights lined up again this Saturday for another Fight Night at UFC APEX in Las Vegas.

The main event features a light heavyweight fight between Brazilian Johnny Walker (+200) and American Jamahal Hill (-240). The total card features 12 fights, with the first of seven Prelim fights beginning at 4:00 PM and the Main Card is scheduled to begin at 7:00 PM on ESPN+.

Diana Belbita and Gloria de Paula set up the closest-matched fight of the Prelims but if we have learned anything over recent Fight Nights it is that some of the longest odds prove to have the best fights. The main card is absolutely stacked with multiple intriguing fights across several weight classes.

Let’s dive into some of our favorite bets for this Fight Night.

Parlay of the Night: Parker Porter & Jamahal Hill to Win

Porter is 4-1 in his last 5 fights with his lone loss coming to Chris Daukaus, who had looked like a new contender prior to getting dropped by Derrick Lewis. Parker is an interesting heavyweight as he has finished by KO, submission and decision in his last 5 fights. Baudot has only gone the distance once in his career. I believe Parker will handle Baudot, who is more of a light heavyweight and has not felt the type of power Parker possesses.

Honestly, the fact that Johnny Walker is in another main event makes me sick. I do not believe there is a more overrated fighter in the UFC than Walker. He is 1-3 over his last 4 fights which includes 2 losses by unanimous decision. Walker has the look and attitude but does not deliver on a consistent basis. If Walker makes it to a decision without being KO’d by Hill who has concrete fists, I believe Hall will win the cardio battle.

I absolutely love this fight for Jim Miller. He is facing Nikolas Motta, who has just 15 career fights spread over 9 years and has only faced Joe Lowry in the contender series as his lone UFC action. Jim Miller has a few more fights under his belt, by a few I mean 34 fights. Miller has more wins by submission than Motta has fights, let that sink in. I believe Miller’s experience will serve him extremely well in this matchup and he will be worth a sprinkle on win by submission which I have seen as high as +350 on some books.

Daukaus is out to defend his family name after his brother Chris was folded by KO artist Derrick Lewis. He has 8 of his 10 wins by submission and that should really be 9 but Dustin Stoltzfus was saved by the bell as Daukaus had a rear naked choke sinched in. Pickett is a striker and I believe Daukaus learned his lesson against Phil Hawes, who took him to school 2 fights ago.

Both fighters like to look for the submission finish. Neither Skelly nor Striegl are going to be looking for a big KO punch and when on the ground, it will be a constant fight for position to attempt a submission. I expect this one to go the distance in what casual fans will think is an extremely boring fight. For those that enjoy wrestling, submission attempts and reversals, this will be far from boring.

I’ll be honest here, I think this is likely going to end with one of the two being knocked out, but I am holding on to the chance of them both eating big shots early and getting gassed to the point their power punches have less effect. I would love to see this one go the distance with each guy sending the other to the mat with impressive power punches only to see them get back up and fight on.