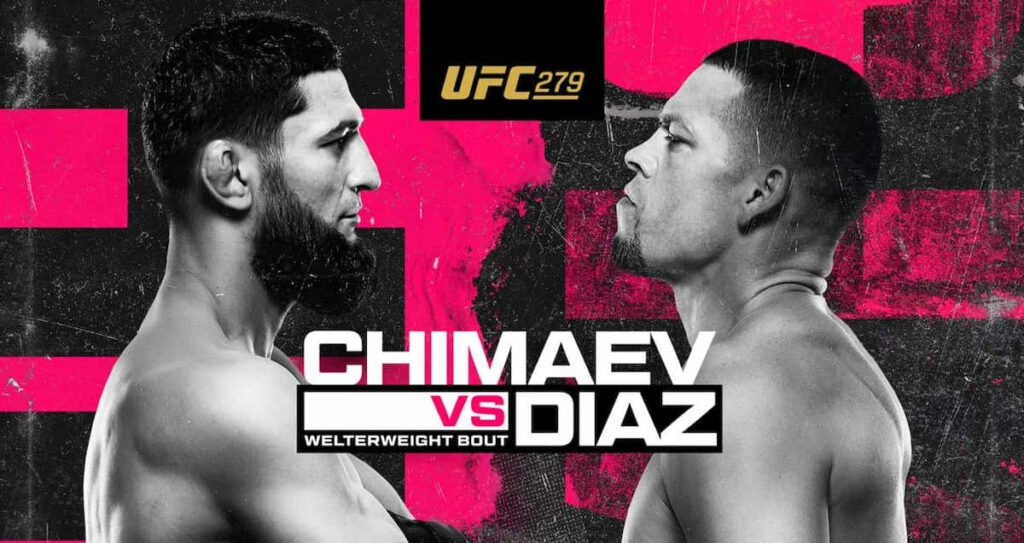 Khamzat Borz faces off against Nate Diaz in UFC 279.

Our Fight Night card last weekend went just 1-2 as we continue to struggle to get over .500 as of late. However, we expect that to change this weekend on what could be the best UFC Card of the year.

Last week, we hit our Parlay of the Night with Ciryl Gane knocking out Tuivasa and the Vettori vs Whittaker went the distance. Our prop play on Nasrat to win by KO fell short as he picked up the win via decision and our Charles Jourdain play was a loser.

This UFC 279 card is absolutely stacked with talent and enormous personalities. So much so, that the press conference had to be canceled for the 1st time in UFC history. Chimaev apparently got into it with Kevin Holland and then one of the guys from Nate’s camp threw an object at Chimaev, which caused Dana White to call it a day.

There are 5-6 fights on this card that could contend for the fight of the night with everything leading up to what is set to be the last match in the UFC for Nate Diaz. We could not be more excited for this Saturday night and we have a decent number of plays for you here.

We start our parlay with one of the top Light Heavyweights in the UFC Jailton Almedia. He is 3-0 in his short UFC career and 16-2 overall. All 16 of his wins have come by finish.

He is matched up with Anton Turkalj, who is 8-0 in his career and 1-0 in the UFC as he picked up a win by decision over Acacio Dos Santon in DWCS. Anton has never faced anyone like Jailton and we expect this to be a mauling ending in an early finish.

Our other leg of the parlay is combining 2 of our favorite things: Playing a fighter that has a strong wrestling background in Cutelaba and fading the most overrated fighter in recent years in Johnny Walker.

We last saw Walker when he became a meme at the hands of Jamahal Hill, who KO’d him in the 1st. He has lost 4 of his last 5 fights and we expect Cutelaba to hand him his 5th loss and possibly into retirement.

Underdogs of the Night

We found three underdogs that we absolutely love on this card! We think there's a solid chance of going 2-1 or better with the following fighters!

Ferguson is another guy with a good wrestling background and is facing a lethal striker in Li Jingliang. Ferguson won’t have the same type of success grappling Jingliang as Chimaev did but he could make this an ugly fight that he steals.

Kevin Holland is a healthy favorite in this matchup and we respect that. However, after hearing about his altercation with Chimaev, we believe that he is overlooking Daniel Rodriguez here a bit and that is a dangerous decision.

Rodriguez was 3-0 in 2021 over some solid opponents. This will be his 1st fight this year and he will be 100% locked in on just Kevin Holland.

This is strictly a value play here. Jake Collier is a decent opponent but we do not believe he should be anywhere near the favorite he is in this matchup.

Barnett has KO power as he’s picked up 17 of his 22 wins via KO/TKO. Barnett is a bit unorthodox and at over 3 to 1, we feel obligated to play the dog here.

Since the UFC 279 card is so loaded, we decided to throw in a couple of extra plays that we think have value. Both of these are available at DraftKings and are around even money.

8 of 10 and 9 of 13 are the number of wins by KO that these two men have in their careers. Both have a ton of power and will be more than happy to stand and exchange.

We can’t make up our minds on who we believe will get the best of those exchanges so we will take the short plus money on it ending with someone getting finished.

We are tossing one more parlay in here with two fighters that we believe will be able to walk away victorious but we're not positive on which method of victory. Dumont is facing a woman who is making just her second professional appearance. Alateng is coming off a nasty 1st round KO victory and is matched up with Anheliger, who is susceptible to submissions.