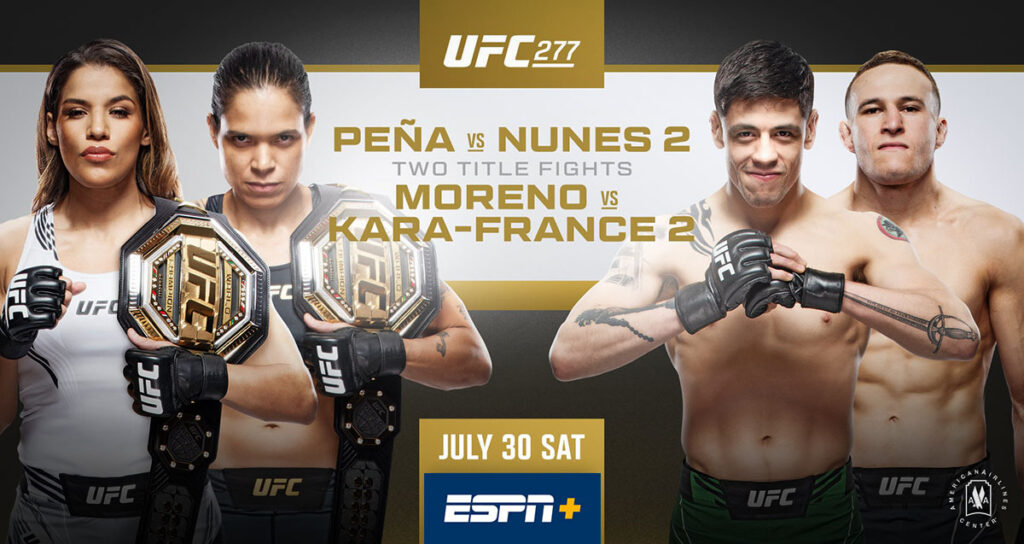 All in all, last weekend’s fight night left many feeling unsatisfied and I was clearly in that camp. Don’t get me wrong, the Molly McCann and Paddy finishes were absolutely electric and sent the crowd into an absolute frenzy, but the injury to Aspinall took all the air out of the arena, and rightfully so.

Many believed that this fight with Curtis Blaydes was going to be a true test of where Aspinall stood in the heavyweight division and unfortunately, after 15 seconds, we did not see much. It was a furious 15 seconds though, and looked like it would be one hell of a 1st round but we will never know. Paul Craig’s antics at trying to get Ozdemir to grapple were non-entertaining and many of the undercard fights were more of the same.

This weekend, the UFC holds their 277th PPV and we get a rematch that has been building with the help of TUF as Julianna Pena defends her belt against the woman she took it from, Amanda Nunes. We also get the workhorse Brandon Moreno facing Kai Kara-France in a battle of 2 of the best flyweights in the world. And don’t sleep on the undercard. I believe the Negumereanu/Potieria fight has the makings to steal the fight of the night. All that said, let’s dive into our best bets for UFC 277.

UFC 27 is headlined by the rematch bout between Pena and Nunes, but all three cards are loaded with quality fights. Find the current odds (courtesy of DraftKings Sportsbook) for the main card below.

The prelim card should make for an entertaining watch as none of these bouts has a fighter with odds longer than +195. Here are the current odds for all four prelim fights:

Odds for the UFC 276 Early Prelims

This is one of the more entertaining early prelim cards we have had all year, headlined by the Michael Morales fight, which makes our best parlay bet for UFC 277. Here are the live odds for the complete early prelim card:

Michael Morales is a perfect 13-0 in his career, which includes 10 coming via KO/TKO. He knocked out Tevin Giles in his UFC debut after winning Dana White’s contender series. He is only the 2nd man to KO Giles in his 18 pro fights. He should walk over Fugitt who is making his UFC debut and likely pick up another KO.

Alexandre Pantoja has yet to be finished in his 29 professional fights. He, however, has stopped his opponents 8 times by KO/TKO and 9 times by submission. He faces Alex Perez who is coming off a 1st round submission loss to the champion, Deiveson Figueirdo last November. Pantoja should be comfortable fighting both standing up and on the mat. They both have BJJ backgrounds but with his recent submission loss and 4th of his career, Perez may try to stand and strike. Either way, Pantoja should have the advantage here and pick up a decision win at worst.

I am aware that this is basically a cardinal sin, betting on a champion who is a big dog in a rematch, but I believe Pena has a psychological advantage over Nunes. In their last fight, Nunes did not look like the same killer she had been and when Pena was able to shake off some big shots, it seemed like Nunes began to doubt her own abilities. And sure, Pena could just be happy with attaining the goal of “becoming” champion, but with all the build and the fact that she may have broken Nunes’ spirit, we believe taking the champion on the big plus money here is worth its value.

Both Pavlovich and Lewis want to stand and throw bombs. Lewis just doesn’t seem to have as much of a tank as Pavlovich. Lewis will also be very patient and pick his spots to throw that big punch where Pavlovich will likely try to pick and prod his way at Derrick. Even if Pavlovich is to lose, he could still outstrike Lewis and if he wins, he could pick up a few bonus strikes as he tries to finish him.

Bonus Bet: Moreno/France Winner to Be by Split or Majority Decision

We believe this fight will be the best one on the card in terms of both fighters’ technical abilities. Moreno will have an advantage on the ground, but we have seen him like to stand and exchange with opponents in the past. France likely has a small edge on the feet and if he is able to keep this fight close and get it to a decision, this prop could be very profitable.