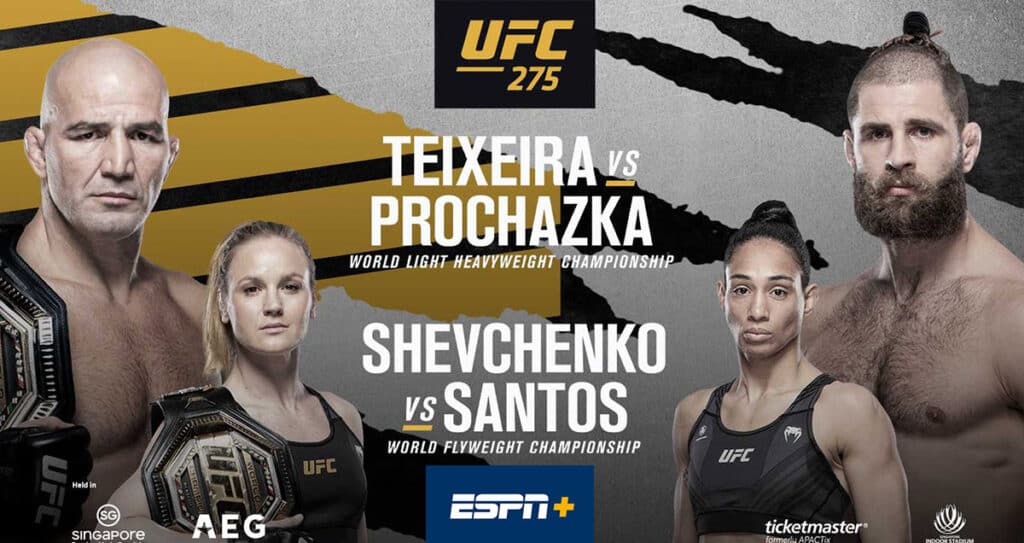 UFC 275 is scheduled for Saturday, June 11, headlined by Teixeira vs Procházka.
By Bill Christy on June 8, 2022

Welp, we came out of our break going 1-2 in the UFC last weekend. Rinat lived up to his hype and Menifield bounced back in strong fashion just as we expected to cash out Parlay of the Night. Munoz got dropped early by Gravely to cost us our underdog of the night and Volkov took care of business in the 2nd to sour our GTD play in the main event.

We put last weekend in the past and look forward to a great PPV card this weekend that is headlined by a fight that has 2 extremely opposite styles. The champion, Glover Texeria loves to work from the ground and use submission techniques while Prochazka prefers to stand on his feet and send his opponent to the ground unconscious. On top of that, we are treated to a Zhang v Joanna rematch from March of 2020 where Zhang won by split decision. Let’s take a look at some of the plays we like for this weekend’s card.

Odds for the Main Card

The main card for UFC 275 is headlined by Teixeira vs Procházka, with Procházka a -190 to -220 betting favorite across the board. The main card is a PPV event, available on ESPN+. Here are the current odds for all 5 fights on the UFC 275 main card.

Odds for the Prelims

The UFC 275 prelims is a four fight card that will broadcast on both ESPN2 and ESPN+. Here are the current odds for the four fights on this card:

Odds for the Early Prelims

The UFC 275 early prelims is a three fight card that will broadcast exclusively on ESPN+. Here are the current odds for all three early prelim bouts:

Typically, our parlays are just on the lower side of being juicy, but this weekend, we are getting serious value on our parlay. We really believe that Fialho should be closer to a -200 favorite here. His striking is way superior to Matthews and he seems to be extremely motivated after his loss to Pereira in January of this year. He has fought twice since then and scored KO victories in the 1st round of each. Matthews has not fought since March of 2021 where he was dominated by up and comer Sean Brady. I don’t believe he will be prepared for the power that Fiahlo is bringing to this fight.

Our other end of the parlay, is also backing a fighter with some incredible power. Jiri has 25 of his 28 wins coming via KO and has not lost a pro fight since 2015. He has only 2 fights on the UFC but both ended in 2nd round KOs. He will be wise enough to stay away from Texeria’s ground game. I see this ending in a KO and if for some reason Fiahlo faulters, we will be taking Jiri by KO at -135.

Joanna lost by split decision in the 1st meeting with Zhang and when looking at the numbers, it looked like Joanna was the more effective fighter. Zhang has since lost back-to-back fights to Rose and her confidence seems to be a bit humbled. I believe Joanna will be the more motivated fighter in this rematch and confident that she will get the victory. I also expect her to do everything she can to get the finish to avoid involving the judges, but at the plus money price, we will take her just to win.

Kape has been on a KO tear with both of his victories last year coming by 1st round KO. He has yet to get in the octagon this year and should be fired up for his 1st of 2022. His opponent, Rogerio Bontorin, has picked up 3 losses and 1 No Decision in his last 4 fights. Kape sends Bontorin to the canvas early again here and we cash our +130 ticket.