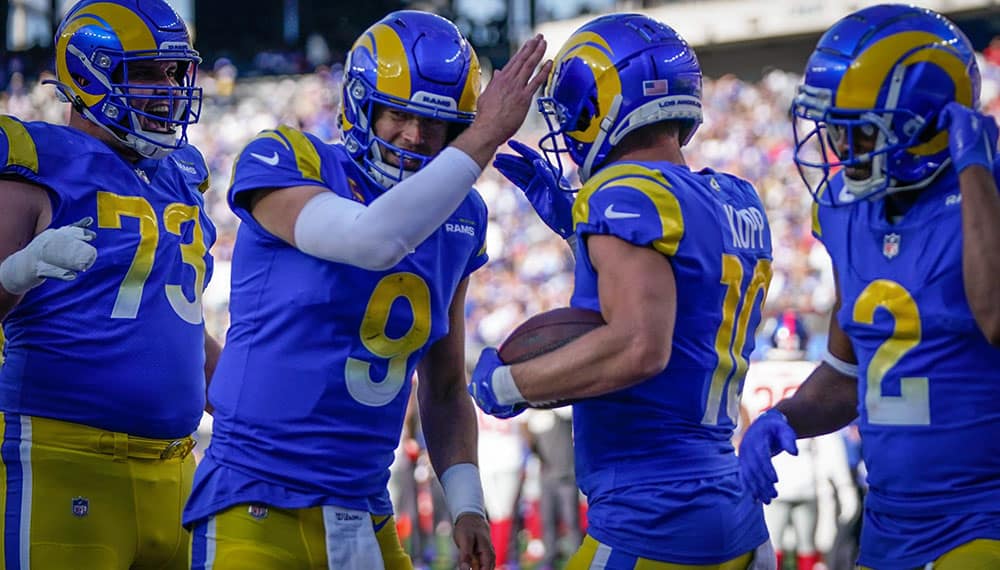 We are in for a treat with Week 9 Sunday Night Football bringing us the LA Rams hosting the Tennessee Titans. Although the Titans are without superstar running back Derrick Henry for the rest of the year, we shouldn’t overlook this Tennessee team that beat the Bills, Chiefs, and Colts over the last three weeks while closing as an underdog in all three matchups.

Do they have enough in the tank to pull off a fourth straight upset against a Rams team that is looking like the best squad in football? Let’s find out!

Before diving into the matchup, we have to talk about the line move that occurred in this game. The consensus look-ahead line was Rams -4 last week, but after the Titans played an overtime game that resulted in them losing their top two running backs in Derrick Henry and Darrynton Evans, books reopened Rams -6 to -6.5.

After Henry was confirmed to be out for the rest of the regular season bettors moved the line to above a touchdown. The spread currently lingers around 7.5 points and we would expect it to stay here unless more names start popping up on Tennessee’s injury report.

Why Are the Rams More than a Touchdown Favorite?

The Rams are looking stronger than ever heading into Week 9. Los Angeles is sitting with a 7-1 record with the lone loss coming to the Kyler Murray-led Arizona Cardinals. We knew that if this team can stay healthy, they will be a Super Bowl contender going into the season, and so far, things have been working out very well for them.

The top-heavy nature of the Rams means that a handful of key injuries can move them from being one of the best teams in the league to barely better than league average in a minute and we’ve seen just the exact thing happening in 2019 (and to an extent in 2020 as well).

LA has steered clear of major injuries so far and with the team trading for Von Miller this week, they added yet another superstar to the roster. The combination of Donald and Miller is terrifying, but we may not get to see it this week with Miller questionable.

QB Matthew Stafford is the likely MVP-frontrunner heading into Week 9 with almost 2500 passing yards in just seven weeks. Stafford is coming off three straight games with a passer rating of 115 or higher and he only had two games through the season where he rated under 100.

The three-headed monster of Cooper Kupp, Van Jefferson, and Robert Woods continues to impress with Kupp already amassing 924 air yards and 10 touchdowns in just eight games. While the LA defense isn’t playing as well as they did last year giving up higher yardage both on the ground and in the air, the team is outgunning their opponents.

We are laying the points with the Rams on Sunday night. The narrative angle of an exhausted, overperforming Titans team facing one of the top teams in the league on the road is hard to overlook. The top running back for Tennessee should be Jeremy McNichols this week and that doesn't give us too much confidence going into this matchup, given the run-heavy nature of the Titans. Ryan Tannehill also might not be 100% and the fully healthy Rams are just clicking right now.

There are plenty of prop bets to like in this matchup. The Titans' secondary has given up well over 320 passing YPG to elite starting QB's this season, with the majority of those games turning into shootouts. The Rams and Matthew Stafford should have their way with Tennessee through the air.

On the other side of the ball, Henry's absence opens up opportunities across the Tennessee offense for players to outproduce their algorithm-set props. While McNichols props are not available at most US sportsbooks, we did find a Peterson rushing total of 25.5 yards at PrizePicks, which is worth some action. His 35-37 rushing yard total at most sportsbooks seems closer to the right number.

While we like Ryan Tannehill's total passing yards number, it is Julio Jones' 50.5 receiving yards that seems like the prop to attack on the Tennessee side. Jones has been targeted frequently when he is on the field, and unlike Brown, he does not carry an injury designation heading into the Sunday night matchup.

With Henry out, there is roughly a 50% usage hole in the Titans offense, and we expect the passing game to pick up the majority of that work. We also don't have faith that the Titans' secondary can hold up against the Rams' passing attack, possibly turning this game into another shootout for the Titans. 50.5 is simply too low and you can find it at -110 to -115 at most sportsbooks.

Kevin Byard is one of the best cover players in the NFL and has shut down opposing tight ends all season. On the year, the Titans are allowing just over 30 receiving YPG to opposing tight ends and Higbee has gone over 36.5 yards in just 3 of 8 starts this season. There aren't a ton of unders we love in this matchup but Higbee's number is clearly too high given the matchup and his role in this offense.

If the Titans trail by more than a touchdown in the fourth quarter McNichols will certainly be on the field. He has been featured as a receiver in the red zone quite a bit this season, with 4 receptions on 5 targets. At +1150, a $10 wager on him as the last TD scorer would pay out $125.