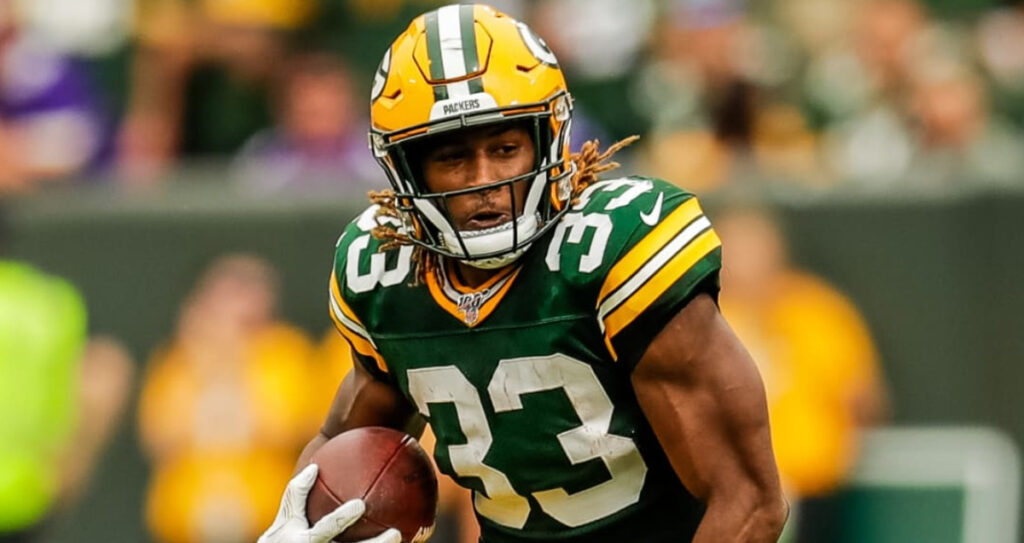 We like Aaron Jones to stay Under his rushing yardage prop on Thursday Night Football against a tough Titans rush defense.

This week’s Thursday Night Football schedule will involve the top seeds from each conference in 2021 battling to retain that supremacy, or even earn a playoff berth, this season. Tennessee finds themselves atop a scuffling AFC South once again, boasting a 6-3 record and a two-game lead over Indianapolis.

Green Bay, on the other hand, is 4.5 games behind Minnesota in their division and holds the 9th-seed in the NFC. The Packers host the Titans as 3-point home favorites with a total set at 41 in what looks to be below-freezing temperatures in Wisconsin.

Our recent run of strong TNF props cooled off in Week 10, finishing 1-2 with underwhelming performances from DJ Moore and Younghoe Koo. Drake London’s receiving yards prop won by half a yard to avoid a reverse sweep by the finest of margins. That brings our TNF prop record to a respectable 6-3 in November.

Looking ahead to this Week 11 TNF matchup in Green Bay, we bring you another edition of our player prop bets for a frigid showdown on the frozen tundra of Lambeau Field.

The Titan’s offense is notably different when the experienced Tannehill is under center, though he has some interesting splits this season that are worth digging into.

Green Bay’s secondary was exposed against Dak Prescott and the Cowboys last week, and we expect a correction back to their earlier season form in Week 11. In the five games before their overtime win against Dallas, teams threw for an average of 173 yards per game against the Packers.

It’s been a disappointing season for Robert Woods. He appeared to be in line for an increased target share in 2022 with AJ Brown’s departure and injuries to his fellow Titans’ receivers. Instead, Woods is averaging career lows in receptions and yards per game through nine appearances.

It doesn’t help that this Tennessee offense is built on Derrick Henry being their bell cow, but his production has fallen off significantly year over year in the same amount of games played. Woods averaged five catches and 61 yards per game in nine starts during the 2021 season.

More recently, Woods is averaging 4.6 targets, 2.2 catches, and 19.8 receiving yards per game over his last five. We expect more of the same in Week 11 with a short week of preparation.

Bettors would have to look back to Week 3 of this season to find the last time a running back rushed for more than 60 yards against the Titans. It’s happened just twice in nine games for a Tennessee defense that ranks 3rd in the NFL in opponent yards per carry in 2022 (3.9) and has allowed a league-low two rushing touchdowns.

Jones is fresh off his best performance of the season against Dallas where he ran 24 times for 138 yards and a touchdown. This is not a play against a running back that’s getting a healthy dose of carries lately, but one that takes into account a difficult opponent who will force Green Bay to divert from its ground game strategy this week.