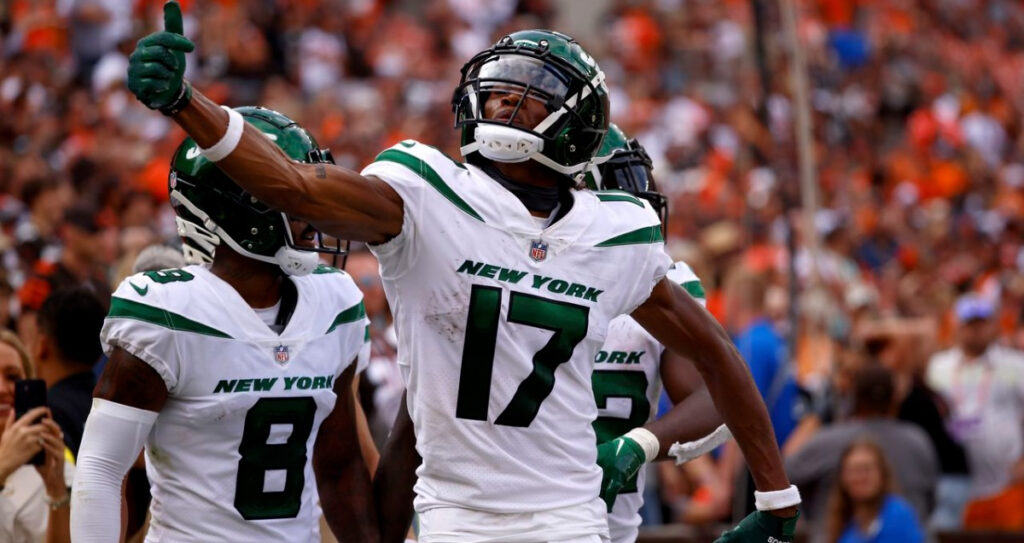 He's been on a bit of a dry spell, but we think Garrett Wilson finds the end zone on Thursday Night Football.

Week 16's Thursday Night Football matchup is a good one! Both the Jags and the Jets are fighting tooth and nail to stay in their respective playoff races. Jacksonville is still within striking distance of Tennessee, and New York is clinging to life in the AFC Wild Card battle.

If you're not interested in betting on a side in this matchup, we've got just what you need for some extra action. Check out our 3 player props for Jaguars at Jets right here! Best of luck with your bets.

Over his last 3 games, Wilson has continued to rack up the yardage and receptions but has not sniffed the endzone. Previous to those 3, he had scored twice against the Bears.

We believe he is going to get off the proverbial “schneid” here and find his way to get one into the endzone. His targets are indicating that he will get an opportunity. The +200 price at BetMGM is simply too good to pass up!

Zach Wilson has been sacked 19 times over his last 7 games. Josh Allen has 10 sacks on the season and picked up 1 in each of his last 2 games.

We believe Allen will get his 3rd straight game with at least 1 sack, as Wilson should provide him with 2-3 opportunities during the contest. There's plenty of value in the +140 price at DraftKings.

Kirk has been the top target for Trevor Lawrence during the season. Over the last 3 games, Kirk has been targeted 25 times while grabbing 17 of them for a total of 241 yards. That is an average of over 80 yards per game.

We don’t need that many, but we sure won’t complain if he gets back to that number. In this meeting with the Jets, he will likely draw Sauce Gardner, but this total is so modest that Kirk still should be able to go over on this one. The plus money price at Caesars also doesn't hurt.

We can't resist the plus-money price on this at Unibet. BetMGM, Caesars, and PointsBet all price this 1 completion higher at 17.5. Wilson has gone over this number of completions in 3 of his last 4 games.

Another reason we love this play is because of Jacksonville's putrid pass defense. They rank 27th in yards per pass allowed, so Wilson should be able to have some success in tonight's game.

For his career, Wilson has gone over this number of completions in 12 of 21 games. That's enough for us to take a stab on the Over. Good luck!

While we like each one of these plays, remember to bet conservatively on these. Our recommendation is to put a fourth of your normal bet on each of these. Good luck