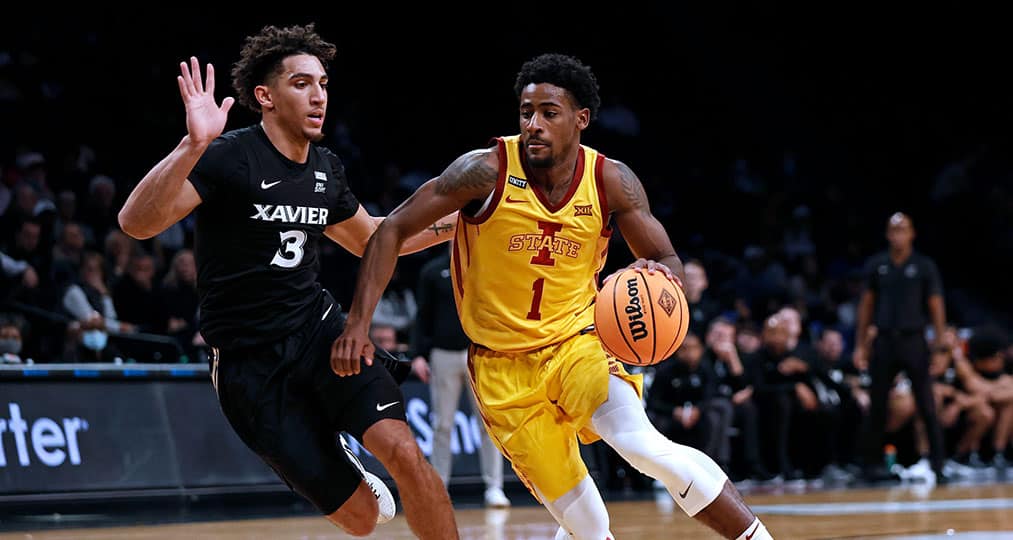 Saturday afternoon the #15 Iowa State Cyclones will host the #21 Texas Longhorns at the Hilton Coliseum. Both teams have 13-3 records on the season but have fared much differently in the conference.

This game should shake out to be one of if not the best game of the day on a very large Saturday slate of games.

Timmy Allen and Andrew Jones have provided a nice one-two punch for the Longhorns. Together they are combing to average 22.3 points per game, 9.3 rebounds per game, and 3.1 steals per game.

For the Cyclones, they have leaned on their senior guard, Izaiah Brockington. His 17 points per game and 8.1 rebounds lead the team.

Road-Weary Longhorns Look for First Win Against a Ranked Opponent

Texas may have just three losses this season but all three have come on the road. The other concerning stat for the Longhorns is that they have faced just two ranked teams this season and have lost both.

However, within the Big 12, Texas is ranked 2nd in defensive efficiency and 3rd in offensive efficiency. This game should tell a lot about where the Longhorns stand at the midway point of the season.

In their 66-52 victory over Oklahoma on Tuesday, the Longhorns jumped out to a 33-21 lead at the half. They shot 46.8% from the field and held Oklahoma to just 1 of 13 from beyond the three-point line. The 17 turnovers they forced made up for the 11 they committed.

Andrew Jones led all scorers with 22 points on 7 of 15 shooting and collected four steals. Timmy Allen, Christian Bishop, and Courtney Ramey all contributed with 10 points a piece in the win. The Longhorns will look to keep the balanced attack as they head into the tilt with the Cyclones Saturday.

Two of the three Cyclones losses have come on the road against Oklahoma and #9 Kansas. The other loss was at home to #1 Baylor. The Cyclones will be happy to get back home after the back-to-back road losses and will have a full house inside Hilton Coliseum Saturday when they take on the Longhorns.

The Cyclones have not had the most efficient of offenses this season but they have the 5th ranked defense in terms of adjusted defensive efficiency.

In the loss to Kansas on Tuesday, the Cyclones won the turnover battle 16 to 12 but lost the shooting from the field as they shot just 40.7% to the Jayhawks’ 43.8%. After taking a two-point lead into the half, Kansas took over and led by as many as 9 points in the second half. Izaiah Brockington finished with 17 points to lead the Cyclones. Gabe Kalscheur and Tyrese Hunter combined for 26 points in the loss.

Texas is 1-3 ATS this season on the road.

Texas is 0-2 ATS against ranked opponents this season.

Iowa State is 3-1 ATS against ranked teams this season.

Iowa State is 7-1 ATS in their last 8 games when playing as the underdog.

The Cyclones have been more battled tested than the Longhorns have to this point of the season. Iowa State has had success ATS against their ranked opponents while the Longhorns have not. I expect this to continue Saturday with the Cyclones not only covering the spread but also taking the outright win. Consider taking the Iowa State moneyline which is available at +130 at PointsBet.

In the last 5 meetings between the Longhorns and the Cyclones they have gone over the total in all 5 games. And in 11 of the last 12 games between them taking place in Ames, Iowa. The total being at 121 is just too low for these Big 12 powers and I see the total getting over 130 by the end of this one.