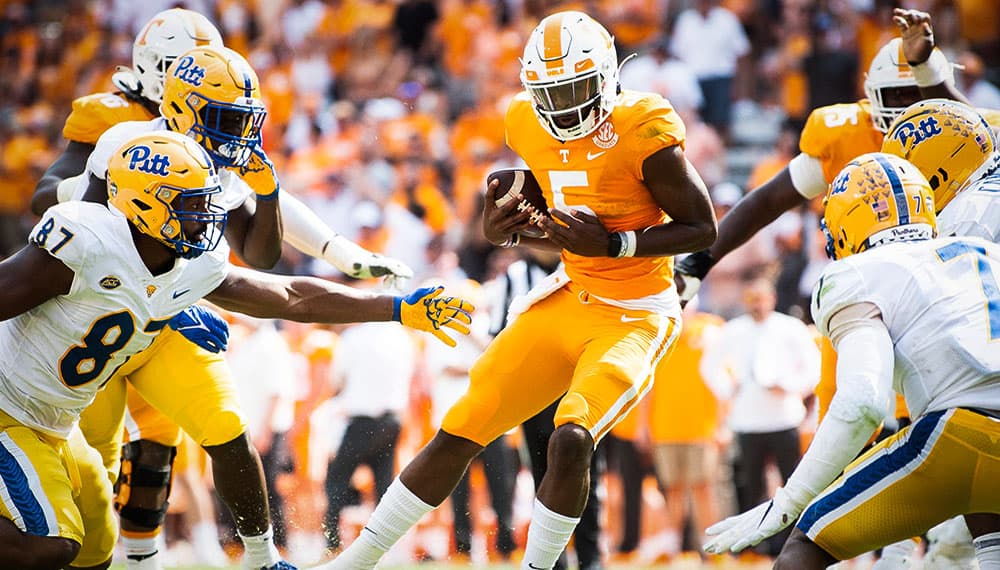 An old-time SEC East rivalry kicks off on Saturday night at 7:00 Eastern Time when the Tennessee Volunteers head south to take on the Florida Gators. The Gators have dominated the series of late as they have won 15 out of the last 16 meetings against the Vols.

Both teams come into this primetime game with 2-1 records. Tennessee’s only loss came to a decent Pittsburgh team a couple of weeks ago. Florida lost a heartbreaker last weekend to #1 ranked Alabama. Let’s break down each team on both sides of the football and supply a best bet recommendation for this matchup.

The oddsmakers are not expecting this to be a tight contest as the Gators are currently listed as anywhere from 19 to 20.5 point favorites over the Vols. The total is floating around 62.5 to 63.5 depending on where you place wagers.

Before making any bets for the Week 4 college football slate, be sure to shop around for the best possible odds. How do you do that? A good place to start is to simply check our free odds shopping tool.

This tool will help you quickly identify where to place your bet. Here’s a live look at the best available odds for both the side and total of Tennessee @ Florida.

What to Expect from the Tennessee Offense in Week 4

New Vols head coach Josh Heupel loves to run an up-tempo offense to try and keep his opponents off-balance. Heupel’s new style has suited the Vols well so far as they’re averaging a robust 42.7 points per game. Keep in mind though that most of that offensive success came against Bowling Green and Tennessee Tech.

QB Hendon Hooker, an experienced transfer from Virginia Tech, has 392 passing yards and five touchdowns on the young season. Florida’s defense may have their hands full trying to stop Hooker and running back Tiyon Evans, who has run for 161 yards and two scores already this year. If Florida’s defense is still in a bit of a fog after losing to Alabama by only two points last week, the Vols could find some success on the ground early on in this game.

What to Expect from the Florida Defense in Week 4

The Gators defense did an admirable job against Bama’s potent offense last week. This unit is loaded with a ton of speed and raw talent. Linebacker Mohamoud Diabate leads the team in tackles with 18 and is also decent in pass coverage.

Florida defensive coordinator Todd Grantham loves to bring pressure to create havoc on the quarterback. This Gators’ defense already has nine sacks through only three games. The man that the Vols need to be concerned with possibly double teaming is Zachary Carter, who is a human wrecking ball that already has three sacks and six tackles for loss.

What to Expect from the Florida Offense in Week 4

Though some Florida fans have been displeased with starting QB Emory Jones at times this season because of his five interceptions, the 6-2 junior played a great game against the Crimson Tide last week. Jones needs work as a passer (2 passing TDs, 5 INTs) but is dangerous with his legs as he’s averaging 5.5 yards per carry. This kid could give the Vols defense some serious headaches on Saturday night.

A key question will be whether or not backup QB Anthony Richardson can play as he’s been sidelined with a sore hamstring. Some early quotes from head coach Dan Mullen suggest that Richardson could see some snaps against Tennessee. How in the world will Vols defensive coordinator Tim Banks plan on stopping two elusive QBs on Saturday?

What to Expect from the Tennessee Defense in Week 4

The Vols may struggle to contain the Gators’ insanely strong rushing attack. Though Tennessee has only allowed 54.3 rushing yards per game, this is a huge step up in class from Bowling Green, Tennessee Tech, and even Pitt. The Gators are averaging 336 yards per game on the ground so the Vols will have no choice but to stack the box and hope for the best.

Tennessee will have to use one of their linebackers to spy on whoever is in at QB for Florida. It’ll probably be Jeremy Banks or Solon Page III who is given that daunting task. Though Florida loves to run a balanced attack, we see the Tennessee secondary holding up fairly well against the Florida receiving corps.

Our initial gut instinct was to take the large number of points with the Vols in this one. Florida could experience a little bit of a letdown coming off the Bama game but if that happens, it shouldn’t last very long. Tennessee’s poor strength of schedule is what kept us off of them in this one as they could be a bit shell-shocked at the sheer speed of Florida’s athletes.

Nevertheless, we do like the OVER quite a bit in this ballgame. The main reason we are betting the Over is that both of these head coaches love to run the hurry-up offense. This should equate to both teams getting a lot of possessions and the chance to put up loads of points.

If Pitt can put up 41 against Tennessee there’s no reason to think Florida cannot do the same. We see this one being a shootout from start to finish with both defenses getting winded early and often. We think Florida wins 45-28 so take the Over!