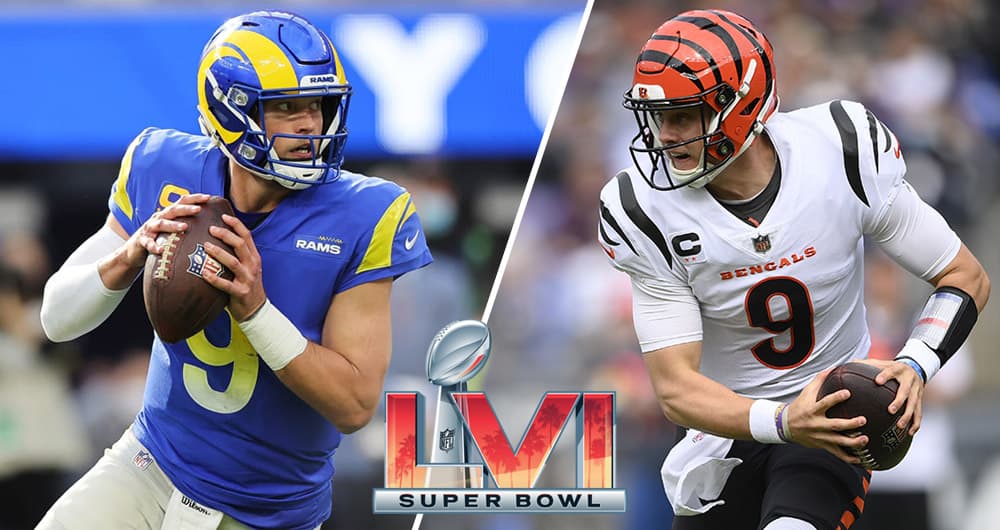 The Super Bowl is finally here, a bittersweet moment for all football fans. The whole season culminates in one game that is essentially a national holiday. However, it does mark the end of the football calendar, meaning we have to wait another half year for the NFL to return.

If you would have told me that I’d be seeing the Rams matchup against the Bengals in Super Bowl 56, I’d be shocked. The 80-1 preseason Bengals are here to stay with Joe Burrow and company clicking at the right time. The Rams are excited to be back in the Superbowl for the second time in four seasons, but this time with a much-needed upgrade at QB, with Matthew Stafford searching for a Super Bowl win to cement his claim for the Hall of Fame.

The Bengals won an incredible game against the Chiefs, surviving a 21-3 deficit. The Bengals punched their ticket to the Super Bowl on the leg of kicker Evan McPherson after a tipped ball interception by Vonn Bell in overtime. The Rams also secured their spot in the Super Bowl by intercepting Jimmy Garrapollo on a strange fourth quarter pass play.

As I sat in a crowded NYC bar, I told everyone who would listen to bet the Rams on the opener. I, among many others, bet the Rams at -3.5 just minutes after the game was over before seeing this line shoot you to -4 to -4.5 by Monday morning. Let’s get into why the Rams will be your Superbowl 56 winner.

Are the Bengals really a “Team of Destiny?”

We all know the narrative at this point. Joe Burrow had an amazing season, coming off an ACL injury that halted his rookie year in 2020. Joe Mixon, Ja'Marr Chase, and Tee Higgins have been some of the league's best offensive weapons thus far in 2021-22. The Bengals defense has also been a huge surprise, playing much better than any projections expected this season. I think regression has been due for this team for weeks and we’ve already seen major concerns in both the Tennessee and Kansas City games.

First off, the Bengals have benefitted from major tipped ball luck. They picked off Patrick Mahomes twice on a ball batted at the line of scrimmage and then later, off the hands of Tyreek Hill in overtime. Ryan Tannehill threw three interceptions against them, two of which were on tipped passes. There’s only so much credit we can continue to give the Bengals for being on the right side of so many 50/50 plays.

We’ve also seen the Bengals offensive line really start to play poorly towards the end of the season. The line has not been a strength for them and many still question the Bengal’s decision not to draft an OT with their top pick in 2021. The Bengals allowed NINE sacks to the Titans defense, which has been horrible in pass coverage all season. The Chiefs only sacked Burrow once in the AFC Championship, but they aren’t exactly known for their pass rush either.

The Bengals did show a willingness to run the ball against the Chiefs, who were the single worst run defense in the NFL in 2021. Where I was especially concerned in the AFC championship lied in the playcalling. Zach Taylor refused to make any adjustments during the game, essentially running the ball into the dirt on every single first down opportunity.

Mixon did rush for 88 yards, but subtracting a 23 yard breakout, he only averaged about 3.2 YPC. That simply won’t cut it against a Rams defense that is light years ahead of the Chiefs. Mixon made our same game parlay picks for Super Bowl 56, where we took his under 69.5 rushing yards prop.

I have my thoughts on Sean McVay but he still represents a huge coaching mismatch over the more inexperienced Taylor. McVay has been to a Super Bowl before, and while a lack of adjustment killed him there, he has a better roster and more experience than Taylor, who has not really proven anything as a head coach. This season has said a lot more about Joe Burrow’s guile and ability than it has about Taylor’s coaching and game management.

The Bengals have a tall task ahead of them, trying to stop a Rams offense that is dynamic in both the run game and the pass game. The return of Cam Akers has given the Rams a dynamic runner that they have been missing all year, although Henderson and Michel have filled in adequately. Odell Beckham Jr. has fit in perfectly and Cooper Kupp has transformed into one of the best wide receivers in football.

I don’t see how the Bengals can get enough pressure on Stafford to be effective in pass coverage. If Stafford has time and remains patient, he should carve up this Bengals defense with the bevy of weapons at his disposal. Stafford at times makes critical mistakes, especially when forcing the ball, but I believe a lot of that comes when the pocket collapses. The Bengals lack the pass rush to be able to affect Stafford’s game.

On the other side of the ball, it’s foolish to think that the Bengals Swiss cheese offensive line is going to come close to stopping Aaron Donald up the middle or Von Miller on the edge.

Matchup wise, I think this is a terrible spot for the Bengals and 3.5/4 points is just way too short. At 4.5 it gets dicey but I still think that number will have value come Super Bowl Sunday. The public will love to bet on the underdog Bengals and continue to ride Burrow's hot streak. It’s time to sell high on the Bengals and buy into this Rams team that’s simply not laying enough points.

How to Bet the Super Bowl 56 Total

If you are looking to bet on the total, I also lean towards the under here, which currently sits at 49.5. It opened at 50, but I still think 49.5 is valuable.

The Bengals offense has not put up tons of points in the playoffs, despite their superstar depth chart. The Rams will want to play possession football and control the clock against the Bengals to avoid Burrow having enough time to come back a la Tom Brady.

I think the lower the total, the better the Rams chances of victory. I wouldn’t mind a same game parlay of the Rams at -4 and an alternate total under 45.5 or so. A low total should be correlated to a Rams victory so look to take advantage of some alt lines and enjoy the big game!