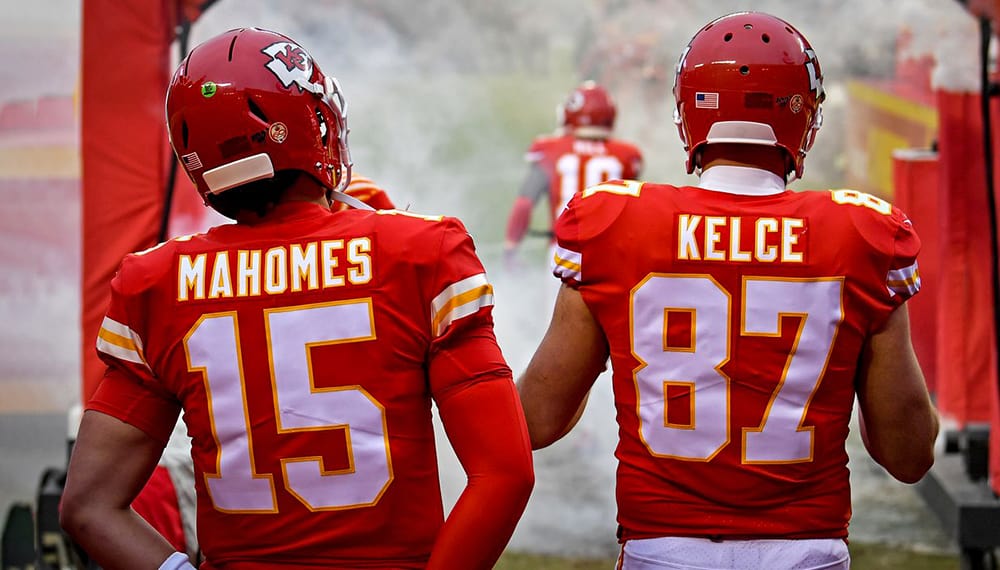 Ben Roethlisberger’s last dance continues as the Pittsburgh Steelers travel to Arrowhead Stadium to take on the Kansas City Chiefs. The kickoff is set for Sunday at 8:15 PM Eastern Time on NBC. Will this be Roethlisberger’s last game or will the future Hall of Famer find a way to pull off a shocking upset on the road?

These two teams met about three weeks ago in Kansas City and the Chiefs won in blowout fashion, 36-10. Oddsmakers seem to expect a similar result this time around, as most online sportsbooks have Kansas City favored by 12.5 points. The total is currently sitting at 46.

The NFL is a tricky beast when it comes to betting on double-digit point spreads. Instead of investing in a particular side in this matchup, here are 5 player prop bets to consider.

Live Odds for the Steelers at Chiefs - Wildcard Weekend

In free bets, if your team wins.

We thought about taking Tyreek Hill in this spot, but he was limited in practice on Thursday because of his heel injury. With Hill possibly playing a limited amount of snaps in this game, we’ll go with the big fella Travis Kelce.

Kelce continues to be one of the most productive tight ends in the league. Though he’s 32 years old, the former Cincinnati Bearcat shows no signs of slowing down. The 6-5 256 pounder is also in great current form, as he’s scored 4 TDs over his last 3 games.

Kelce found the end zone 10 times during the regular season and you can bet that Patrick Mahomes will be looking for him in goal-line situations. Be sure to shop around on this anytime TD prop, as the juice on it varies quite a bit from book to book.

This one looks too easy! Mahomes and company will be in rare form for a home playoff game. The Chiefs should be more focused than ever, especially since they want to redeem themselves off of last year’s embarrassing Super Bowl loss.

The truly great players have a knack for flipping the switch come playoff time. It wouldn’t surprise us in the least if Mahomes throws for over 300 yards in this game. The Steelers’ secondary has played pretty well this season, but they won’t be able to contain all of the Chiefs’ many weapons.

Mahomes has fared well against Pittsburgh. In two career games against the Steelers, the former Texas Tech star has averaged 292 passing yards per game. That trend should continue on Sunday night, so play the Over!

Claypool has a big frame (6-4, 238) and a boatload of talent, but we don’t see him doing too much in this game. Diontae Johnson has established himself as Roethlisberger’s favorite target and that has reduced Claypool’s number of targets.

It can be hard to fade a player with Claypool’s ability, but keep in mind that he only averaged 3.9 receptions per game this season. The former Notre Dame standout also had 8 games this year where he caught 3 passes or less.

Kansas City’s secondary struggled during the early part of the season, so that is a bit concerning. However, the Chiefs have done a much better job of playing the pass since Week 8. We expect Tyrann Mathieu and company to limit Claypool’s opportunities in this game.

The plus juice is just too much to pass up here. Take Claypool to stay Under 3.5 receptions!

Freiermuth has had a nice rookie season. The former second-round draft pick out of Penn State has hauled in 60 receptions for 497 yards and 7 TDs this year.

The Steelers like to run a dink and dunk type of passing offense that relies heavily on the tight end. That should help our case for the Over here. Don’t you just love it when the Steelers fans chant “MUUUUUUTH” after Freiermuth catches a pass?

Freiermuth has eclipsed this yardage total in 3 out of his last 4 games. We’ll bet that he does it again on Sunday Night Football. Take the Over here!

Yes, we know that Harris was banged up with an elbow injury last week against the Baltimore Ravens. However, the former Alabama star and first-round draft pick is expected to practice on Friday after missing a couple of practices earlier this week.

Do you really think Harris will miss his first-ever playoff game? Not a chance! This kid is a gamer and he’ll be fired up and ready to go!

Harris has had a phenomenal rookie season, especially when you consider that he’s been running behind a subpar offensive line. He’s racked up 1,200 rushing yards and 467 receiving yards this season. He’s also found the end zone 10 times.

With a game total as low as 46 points, the Steelers may not score many touchdowns in this game. However, we expect Harris to score one against a Chiefs’ defense that has struggled against the run all year long. His receptions total also made our best prop bets for the entire Sunday playoff slate.

With 6 sacks in his last 5 games, Chris Jones is likely going to be a favorite amongst prop bettors on Sunday, but there just isn't enough meat on the bone with -110 odds. Clark has not been quite as hot as Jones but did close out the season with two sacks in his last three games. He also sacked Roethlisberger when these teams met in week 16.

The Chiefs were up big in that win and forced Ben to drop back 37 times. If that game script holds true again in this one, we expect the Chiefs to tee off on Roethlisberger and for both Clark and Jones to find their way into the box score with a sack.

Best of luck with all your Wildcard Weekend action!