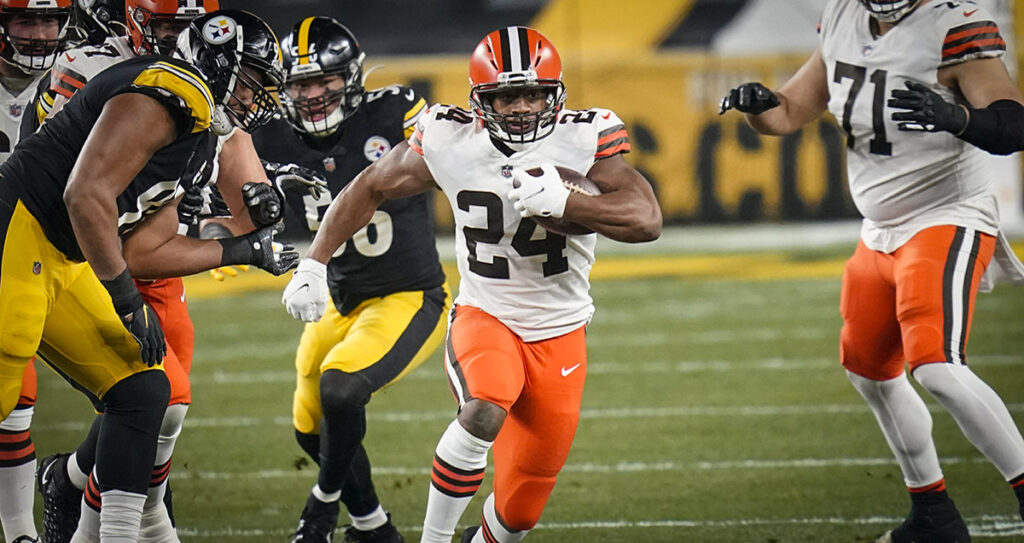 Nick Chubb is a big reason why we like the Browns to cover against the Steelers on Thursday Night Football.

After going 2-0 on the 1st Thursday Night Football game, we dropped 2 this past week. We were riding the Chiefs -3.5 and they came back to get a 27-17 lead in the final frame.

Unfortunately for us, the Chiefs forgot to close the backdoor and Justin Herbert kicked that thing down with half an arm. He hit Josh Palmer to cut the lead to 27-24 with just 1 minute remaining. While those points helped our case for the Over, it was not enough to get over 54 for us.

Herbert was strong throughout the game, going for over 300 yards and 3 touchdowns. Mike Williams bounced back from a rough week 1 to explode for 113 yards on 8 catches and a touchdown.

This week, our matchup is a great divisional matchup between two 1-1 teams. The Pittsburgh Steelers are heading to Cleveland to face the Browns. Both teams are coming off a loss and are looking to bounce back and get atop the division with a win.

Pittsburgh came into last week’s game with a good feeling. They had dropped divisional rival Cincinnati on the road and now were hosting a Patriots team that was held to just 7 points by Miami the previous week.

However, the Steelers' offense struggled throughout the game last week. They trailed 10-3 at the half and found themselves down 17-6 heading into the 4th.

Mitch Trubisky hit Pat Freiermuth for a touchdown that cut the lead to 3 on the 1st play of the last quarter but that was to be the final. The Steelers finished with just 243 yards of total offense and turned the ball over twice in the 17-14 home loss.

Cleveland, on the other hand, had better luck with their offense last week, especially with Nick Chubb in particular. Chubb finished with 87 yards on 17 carries and found the endzone 3 times.

With 2 minutes left in the game, Chubb scored his 3rd touchdown, which gave the Browns a 30-17 lead over the Jets. However, Joe Flacco was able to guide the Jets to 2 touchdowns with an onside kick between them while the defense picked off Jacoby Brissett on the final play of the game.

The Browns had the game in hand the whole way until their last-minute collapse. They had success on the ground and will look to do the same this week against Pitt.

The Steelers are allowing 128.5 rushing yards per game and most would argue Chubb and Hunt will be more imposing than the others they faced in Cincinnati and New England. We expect the Browns to control this game throughout and put the finishing touches on the Steelers like they were unable to do to the Jets.

We mentioned in the breakdown for the play on the spread that we expect the run game of the Browns to dominate. If that ends up being the case, the clock will be running most of the game with only the issue of a long breaking run to cost us this total. We believe this will be a classic AFC North battle that will be low scoring and hard-nosed.

Another thing that may also help our case for the Under is the weather. Though the temperature will be comfortably in the 60s, most reports are calling for winds of up to 19 miles per hour. That could negatively affect the passing game of each team and lead to less scoring.

Betting Trends for the Under:

A Closer Look at the Odds for Steelers at Browns

We still feel good about our Cleveland pick and would definitely play the current (-3.5) price over at FanDuel. 68% of tickets are coming in on Pittsburgh, which is understandable with Mike Tomlin's history as an underdog. However, we think the public dog gets slaughtered tonight and that the Browns will roll.

As for the total, it opened at 40.5 and there's been a ton of support for the under. The total now sits at 38 at most sportsbooks, but PointsBet Sportsbook is still offering 38.5 for you under bettors. Best of luck with all of your Thursday Night Football action!