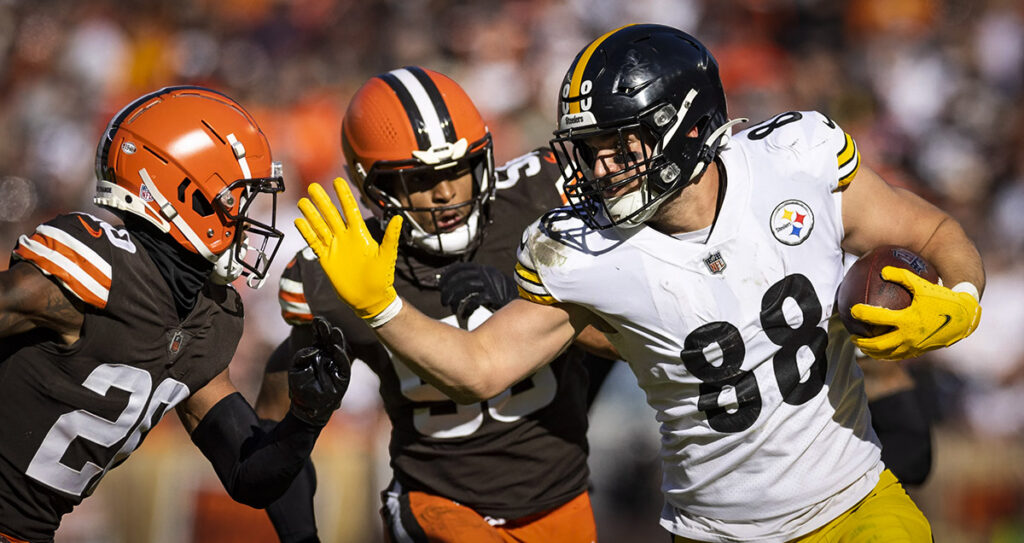 We expect a big night from Pat Freiermuth and love his receiving yard prop for Thursday.

We may have gone 0-2 on our game plays last Thursday, but we made up for it with our props as we swept the board with a 3-0 mark! Justin Herbert to throw an interception came in the 4th quarter on a play that completely turned the tides of the game. Jaylen Watson picked off Herbert at the 1-yard line and went 99-yards the other way for the score.

Our Mike Williams anytime touchdown at +125 hit on the 1st score of the 2nd half when Herbert found him from 15 yards out to take a 17-7 lead. After the Chargers fell behind, our Austin Ekeler over 4.5 receptions prop kicked back to life as he ended with 9 total.

This week, we hope to duplicate our success on the prop market when Cleveland hosts Pittsburgh. Nick Chubb is coming off a 3-touchdown performance last week. Najee Harris has yet to crack the 50-yard mark through 2 games.

The Steelers have allowed receivers to gain over 100 yards and a touchdown in both of their previous games. The Browns' defense has done the exact same as Robbie Anderson and Garrett Wilson torched them for 100 yards and at least 1 score. That all being said, here are the props we believe will be profitable for the Steelers at Browns matchup.

Hunt has seen a bit of a diminished role in the offense, at least in terms of carries, and rightfully so. Nick Chubb is one of the best rushers in the league and Hunt had a trade request denied earlier this year.

That said, he has still been involved in the passing game. He has grabbed 6 passes for 40 yards and gone over 15 yards in both games so far this season. We like him to continue this trend this Thursday.

Yes, this prop is a bit on the juicy side but we believe it is worth it. Freiermuth is 2nd on the team in targets, receptions, yards, and tied in touchdowns. He grabbed 7 balls in week 1 and followed that up with 4 last week.

We believe Trubisky will look to get him involved a good amount here against the Browns. This Browns team allowed 40 yards to Conklin last week and 53 to Thomas last week, so they are susceptible to tight ends.

We are expecting the Browns to be leading in this matchup and force the Steelers to pass more than they would like. Mitch tossed 38 passes in Week 1 against the Bengals and 33 last week against the Patriots.

The Browns saw 44 passes thrown by Joe Flacco last week when they faced the Jets and will likely see a good amount here as that is where the Jets found success.

You can also play Coop's receiving yards Over 46.5 (-110) but we prefer the alternate plus money option at FanDuel. After a lackluster Week 1 against the Panthers, the former Alabama star came to life last week against the Jets. Cooper caught 9 passes for 101 yards and a touchdown in that game and we look for him to stay hot on Thursday Night Football.

The 28-year-old has played against Pittsburgh twice in his career and has averaged 77.5 receiving yards. Cooper has also gone Over 50 receiving yards in 60 of his 110 career games. Both of these trends are enough to push us toward the Over.

The matchup should favor Cooper in this game as well. The Steelers have given up an average of 275.5 passing yards per game so far this season, which ranks an abysmal 30th in the league. Cameron Sutton is a great corner, but this yardage total is simply way too low for a guy as talented as Cooper.