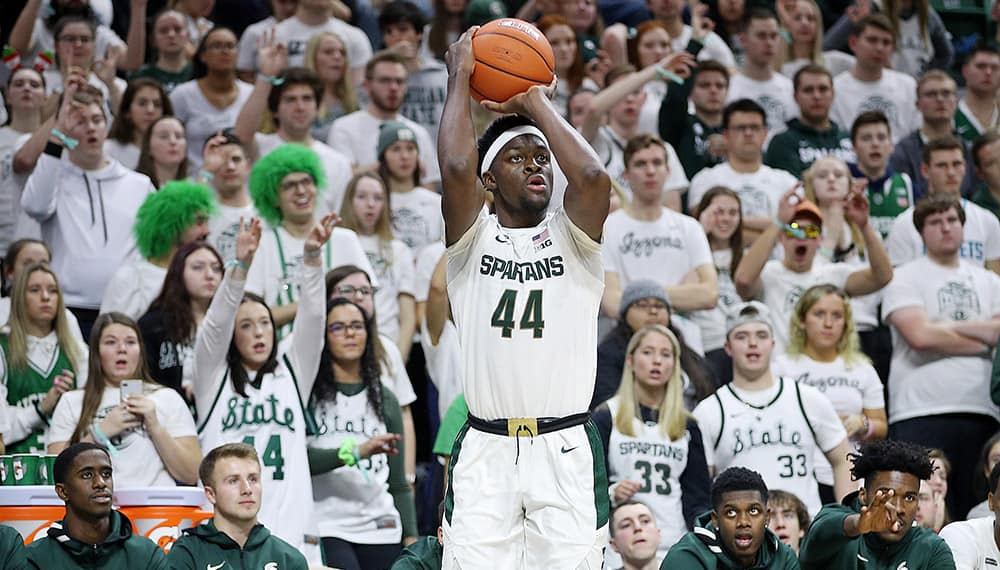 College hoops fans are in for a treat this Friday night. The Friday slate is typically filled with mid-majors and Ivy League matchups but this Friday, we get a classic Big Ten matchup at 9 pm EST. The #8 Wisconsin Badgers who sit atop the Big 10 standings will host the #14 Michigan State Spartans who are right behind them and Illinois.

The Badgers are 15-2 overall including 6-1 in conference and 8-1 at home. That loss was to Providence back in late November. The Spartans are 14-3 overall including 5-1 in the Big Ten and are the only team in the conference to be undefeated on the road at 3-0. Their road wins include Butler (9-8), Minnesota (10-5), and Northwestern (9-7).

We will have contrasting styles in this matchup. The Spartans enjoy pushing the tempo offensively and rank 43rd in the country in average possession length. The Badgers are much more methodical in their offensive sets and are happy to use the majority of the shot clock each possession. The team that is able to dictate the pace in this game could very well dictate the outcome as well.

One thing is for sure in college athletics, the temptation to look ahead of inferior opponents to big matchups that follow will always seduce the athletes. We see it in football and basketball, year in and year out. The Spartans fell for the trap when they took on Northwestern at home, a team they had previously beaten by 6 on the road. The Spartans were looking ahead to the matchup with #8 Wisconsin next and were snake-bitten by Northwestern 64-62.

In the loss, the Spartans turned the ball over 17 times and were outrebounded by 5, including giving up 17 offensive rebounds. Northwestern had 15 more shot attempts than the Spartans and in a two-point game, those bonus possessions proved invaluable. Junior forward, Julius Marble II led the Spartans with a career-high 18 points in the loss. Michigan State can not have these types of turnovers and lack of blocking out on defense against Wisconsin or the Badgers will close them out early.

The Wisconsin Badgers have been a bit of a surprise this season. Many experts put them in the middle to lower half of the Big Ten standings but here they are, 6-1 in the conference and sitting in the king’s chair above the rest of the Big Ten. Since their sole conference loss at Ohio State back in early December, the Badgers have been on a tear. They are currently on a 7-game win streak which includes wins over #3 Purdue on the road and the rematch against #16 Ohio State at home.

Their latest win happened to come against the team that just defeated the Spartans, the Northwestern Wildcats. In the 82-76 victory, Wisconsin was super-efficient on offense shooting 51.9% from the field including 9-17 from long distance. They also held the Wildcats to just 8 trips to the charity stripe. Johnny Davis was stellar, scoring 27 points on 8-15 shooting and 4-5 from deep. Tyler Wahl finished with a double-double in the win. He scored 14 points to go with the 11 rebounds he grabbed. The Badgers would love nothing more than to add #14 Michigan State to their list of fallen opponents in their current win streak.

Both Michigan and Michigan State have been on awful ATS runs over the past few weeks of Big 10 play. Both teams are bettor favorites and sportsbooks typically adjust their lines as such, which creates the potential to find value fading them when they are struggling. The Spartans are 1-4 ATS over their last five games and will find it tough sledding against a Wisconsin team that is 5-0 ATS over their last five. Here are the key betting trends for tonight's matchup:

Best Bet Against the Spread: Wisconsin -4.5

The Badgers are playing the best basketball in the Big Ten right now, if not in the entire country. If the Spartans had been able to squeak by Northwestern last game, I would have initially leaned a bit towards their side but I am now squarely on the Badgers. Wisconsin will have extremely limited turnovers and the environment in the Kohl Center will palpable. Give me the home chalk here in this Big Ten showdown.

Surprisingly, the typical combination in Wisconsin games when they win was always the under to go along with it. However, they have gone over the total in all 7 games of their current win streak. I am riding that trend here and taking them to go over the total in a higher-paced game than in the past.

Enjoy some college basketball betting action tonight as attention shifts to the loaded slate of NFL Divisional Round matchups on Saturday!