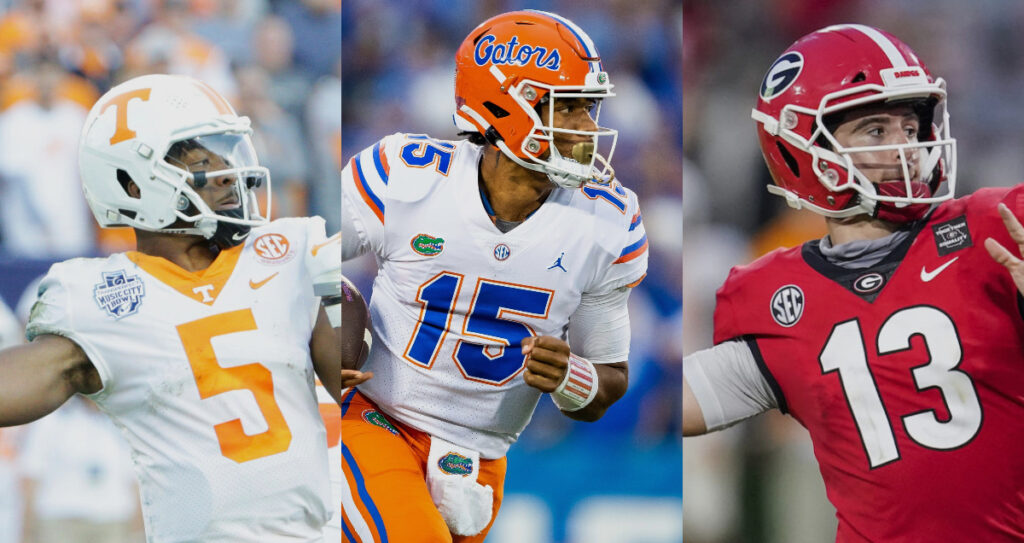 Hendon Hooker, Anthony Richardson, and Stetson Bennett are the highlights of our SEC East Betting Preview.
By Bill Christy on July 25, 2022

Let's face it, the SEC is king when it comes to college football. Though they are often overshadowed by their SEC West counterparts, the SEC East took home a national title last season. Check out our SEC East betting preview to get all of our best bets and team totals.

In the below column, we'll take a look at the current odds to win the SEC Championship Game as well as each team's season win totals. These numbers are from DraftKings Sportsbook and will be updated as the season gets closer. As expected, the Georgia Bulldogs are the runaway favorite in the SEC East

The Bulldogs had what you could call a successful season in 2021 if you think going 14-1 and winning the national title is successful. Joking aside, the 2021 season was an incredible one for Georgia. Kirby Smart finally got the program a national title, an accomplishment that had eluded the program since their last one in 1980.

The defense was one of the best of all time, allowing just 10.4 points per game and the offense wasn’t too shabby either, scoring 37.4ppg (8th in the nation). The only blemish was a 41-24 loss to Alabama in the SEC title game but the Dogs avenged that in the CFB Final where they held Bama to just 18 points en route to a 33-18 victory.

The 2022 season could be more of the same for Kirby and company. The defense will have stable pieces in place and with a recruiting class that has been near the top for the past few seasons, the ability to replace pieces should be rather easy.

Stetson Bennett will be back to run the show on offense and will have Arik Gilbert and Brock Bowers as one of the best tight-end duos in the country. A healthy stable in the running back department is led by Kendall Milton and Kenny McIntosh.

Nolan Smith and Robert Beal could become household names in 2022, as they will likely be the leaders of the defense that may not be as good as last year’s group but is still one of the best in the nation. Georgia will have the talent to run the table this season as they get Florida on neutral turf and Tennessee at home. A road game in mid-November at Kentucky will likely be their final test at completing an undefeated regular season.

Hendon Hooker seemed to be the story of 2021 for the Vols and 1st-year head coach Josh Heupel. Hooker took a group that barely scratched 3 touchdowns per game in 2020 and had them finish 7th in the country last season (37.9ppg). He also had a rushing attack that finished 12th in the country with 218.8 yards per game.

The defense did struggle to keep up their end of the bargain, allowing over 31 points per game left them in 97th nationally. The 7-6 regular season mark was a successful one but the Vols could not hold up against Purdue despite Hooker’s 5 touchdown game in the 48-45 loss in the Music City Bowl.

2022 should be more of the same for the Vols and Heupel. Hooker is back along with a seasoned offensive line. Cedric Tillman will be the main target for Hooker and in total, the Vols will return 8 starters on offense.

With scoring looking like it won’t be much of a problem again this season for the Vols, the defense certainly will. The line will need to be better in 2022 after allowing upwards of 200 yards per game on the ground and over 33 points per game in conference play. This team is still far away from pushing the #1 spot away from Georgia, but if Heupel can continue to get the program headed in the same direction, there will be more to cheer about at Rocky Top yet again in 2022.

Kentucky was off to a hot start in 2021 when they began the campaign 6-0, which included wins over LSU and Florida at home and over South Carolina on the road. A 30-13 loss at Georgia seemed to have sent the Wildcats spiraling as they lost at Mississippi State and home to Tennessee in consecutive games.

The Cats bounced back to win their final 3 games of the season which included a tight bowl victory over Iowa 20-17. Oddly, the Cats ranked 24th in the country in both scoring and points allowed in 2021. The run game on both sides of the ball is where Kentucky excelled. Racking up over 207 yards per game placed them 20th in rushing offense while holding opponents to under 120 per game put them slightly above at 16th defensively.

2022 will not be without change for the Wildcats. One of the most notable ones is the loss of OC, Liam Coen, who has gone on to the NFL with the Rams. However, up-and-coming QB standout Will Levis is back to run the show along with a strong group of backs in the backfield.

The Cats return just 2 of their offensive linemen, which will be the only concern for this group. The defense will return a decent number of starters with the strength being at linebacker. The way the schedule is laid out, 9 wins should be very attainable for this group.

In week 3 of the 2021 season, the Gators were just a two-point conversion away from taking Alabama to overtime. After trailing 21-3 in the 1st quarter, Dan Mullen rallied his troops and cut the lead to just 5 points heading into the 4th. After an Alabama field goal, Dameon Pierce scampered in a 17yd touchdown run with just over 3 minutes remaining but the Gators failed to convert the two-point conversion.

A 4-6 mark followed the Alabama loss including a loss to UCF in the Gasparilla Bowl. The 206.5 yards per game on the ground was where the Gators did most of their offensive damage in 2021. On defense, the Gators were strong against the pass, where they ranked 9th in the country in allowing just 186.3 yards per game.

Anthony Richardson is back this season to run the show under center and if his performance in the latter part of 2021 is any indication, we should see consistent play throughout 2022 from him. Montrell Johnson was added to the backfield after transferring from Louisiana and Arizona State transfer Ricky Pearsall will add to a healthy crop of wide receivers.

The defense will need to address concerns against the run, where they were susceptible in 2021. Early season matchups with Kentucky and Utah along with a road test at Rocky Top may just expose those concerns.

South Carolina ended 2021 on a high note defeating their northern border brother North Carolina 38-21 in the Duke’s Mayo Bowl. It was Shane Beamer’s first season leading the program and he got folks in Columbia excited for 2022. However, the Gamecocks will need to get more than 1 road victory to take the next step forward.

Their lone road win last season came at East Carolina where they snuck out with a 20-17 victory. The defense was their strong suit last year, especially against the pass where they ranked 10th in allowing just 187 yards through the air per game. Offensively is where they struggled. South Carolina barely cracked the 20 points per game mark, in part due to a 72.73% red zone scoring percentage.

The offensive woes of 2021 may have been fixed in the offseason through the transfer portal. Wide receivers Corey Rucker and Antwane Wells were brought in from Arkansas State and James Madison. But the biggest splash was done behind center where Beamer snagged maligned QB Spencer Rattler from Oklahoma.

The change in scenery could be just what the doctor ordered for Rattler, who never lived up to the Heisman potential in Norman. The defense should be decent enough again this season leaving much of the gains to come on the back of Rattler.

The 2021 Tigers were fortunate enough to make a bowl game after sitting at 4-5 with 3 games reaming in the season. They took care of business at home in back-to-back wins over South Carolina and then Florida. Those wins gained them entrance into the Armed Forces Bowl where they took on Army and lost a tight one 24-22 after leading 10-0 through the 1st quarter.

A defense that allowed 34.3 points per game coupled with an inefficient offense made wins hard to come by last season for Missouri. The offensive line was not to blame, as they held opponents to sacks on just 4.17% of the time, good enough for 16th in the nation.

If the Tigers want to take a step forward in 2022, it is going to have to start with addressing the defense. Coach Drinkwitz brought in Blake Baker to handle the defense and he will have a couple of building blocks in Isaiah McGuire up front and Martez Manuel roaming the back at safety.

The offense lost their most reliable piece in running back Tyler Badie and will likely utilize Stanford transfer Nathaniel Peat in that role. Brady Cook looks to be the starter behind center but will have redshirt freshman Tyler Macon and graduate transfer Jack Abraham nipping at his heels.