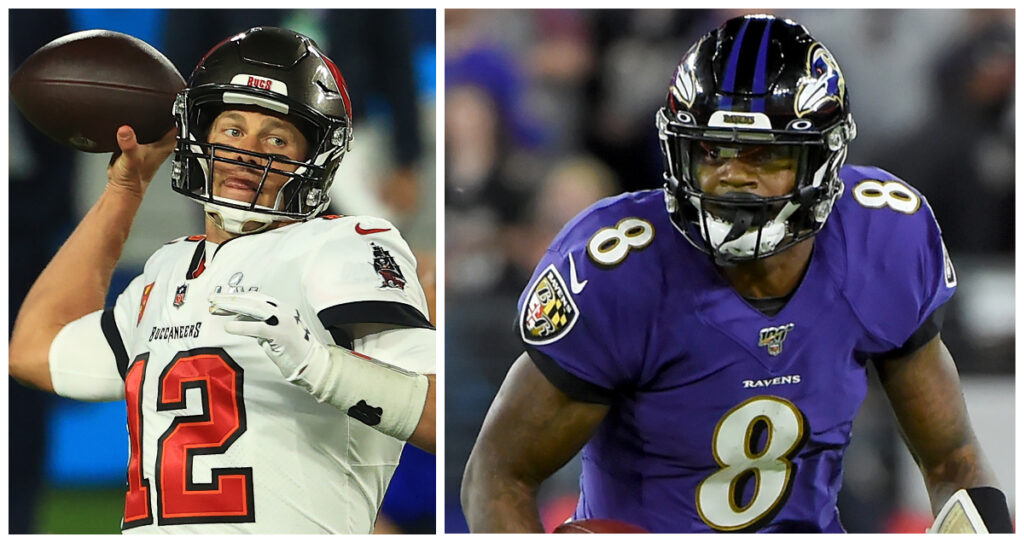 Tom Brady faces off against Lamar Jackson as the Bucs take on the Ravens on Thursday Night Football.

We have one heck of an interesting matchup this Thursday night. Tom Brady and the Bucs just can’t seem to figure things out this season and it won’t get any easier as they host the Baltimore Ravens.

Lamar Jackson has slowed down a bit since his fast start at the beginning of the season but will still cause issues for a Bucs defense that has been the one consistent for the team. Here are our 2 best bets for Thursday Night Football.

The Ravens led 20-10 midway through the 3rd quarter after Gus Edwards punched one in from the 1-yard line. After Cade York and Justin Tucker traded field goals, Kareem Hunt found paydirt with 9 minutes remaining to cut the lead to 3.

With 2-minutes remaining, Cade York missed a 60-yarder to tie, and on the next possession, the Browns were unable to get into field goal as time expired. The Ravens are averaging almost 26 points per game which places them in 6th among the NFL. They are 5th in rushing, averaging over 155 yards per game on the ground, with much help from Lamar Jackson.

The Bucs are a disappointing 3-4 on the year and have lost 4 of their last 5 games with the lone win coming over Atlanta in early October. They lost their last 2 on the road to Pittsburgh 20-18 and then at Carolina last week 21-3.

Last week’s loss was especially demoralizing due to the fact that Carolina just traded away their best offensive weapon in Christian McCaffery to the 49ers in order to begin a rebuilding process. The Bucs' defense is still playing well, allowing just 17.7 points per game and getting to the quarterback 22 times for sacks which is 3rd in the NFL.

This game is very tricky, and while it is conceivable that the Bucs turn things around and win this one at home to give the fanbase some hope, we just don’t see it happening. The Ravens’ defense is allowing 23 points per game which is in the bottom half of the league, but they are opportunistic.

Baltimore is 3rd in the league with 8 interceptions and they've sacked opposing QBs 20 times, which is 5th in the league. We believe the Ravens' defense is going to be the key in this one and that they'll hold Mr. Brady in check.

We also love that the Ravens are one of the top rushing teams in the league, as they rank 2nd in yards per rush (5.4). Tampa Bay has a solid defense but they do allow 4.4 yards per rush, which only ranks 16th. The Bucs may have a hard time containing Jackson once he gets outside the pocket.

As we mentioned above, the key to this game is going to be the Ravens' defense and the pressure they put on Brady and the Bucs' offense. With the spread being so small, we believe the Bucs' defense will keep them in the game until the end.

Nevertheless, we think the Ravens take this one on the road in a low scoring affair that will showcase a turnover or 2 inside the opponent's red zone. Both of these offenses rank outside the Top 10 in red zone TD percentage so there could also be lots of field goals in this one.

This line opened up at 44 points and has been bet all the way up to 45.5. We disagree with this move and will happily fire away on the Under!