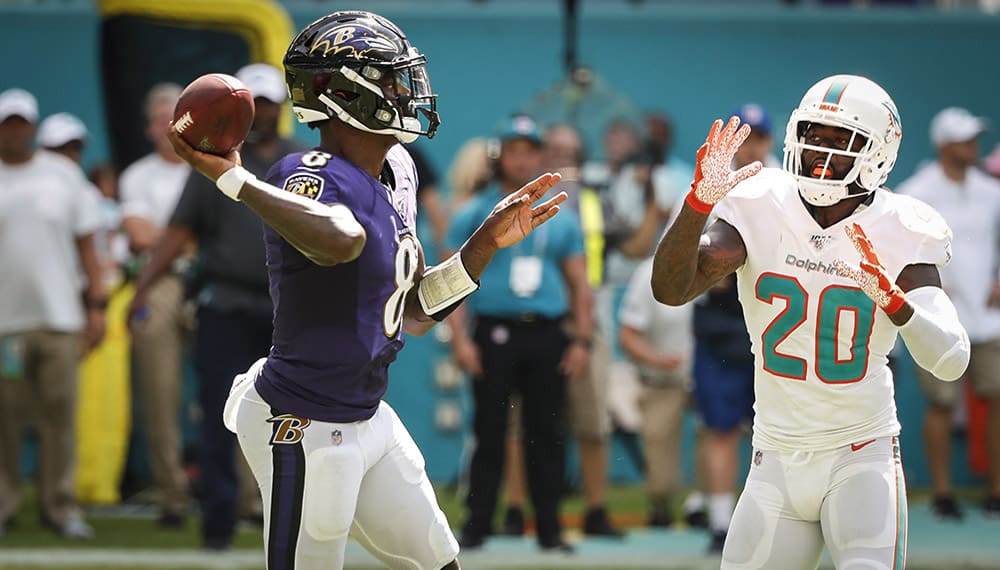 Can Miami cover a 7.5 point spread at home on Thursday night? We will share our thoughts, pick for best bet, and some of our favorite props, but let's first take a live look at the best available odds for both the Ravens and Dolphins.

The look-ahead line for this game was Miami +7 but sportsbooks opened it at +6.5 following Miami's win over the Texans. The expectation was that the Houston offense would improve with Taylor back, so the Dolphins dominating defensive performance likely concerned oddsmakers given this was expected to be one of the top defenses in the league this season.

It took Ravens bettors about an hour to move the line back to 7 points and the last remaining sportsbook that had the Ravens as a 7 point favorite moved them to 7.5 on Tuesday night. Unless an update to Tua's status moves this line, we expect 7.5 to hold through kickoff.

Here is a live look at the best odds (or lowest juice) available for both sides, moneylines, and the total:

Notable Betting Trends Ahead of the Week 10 TNF Matchup

While this will not be the first time he has faced the Dolphins, it will be the first time since 2019. His stat line in that matchup? 17 of 20 for 324 yards and 5 touchdowns... he needed only 6 yards on the ground to put up 59 points.

Despite how good Jackson has been this season, and a 6-2 record, the Ravens have been poor against the spread. They have covered in just 3 of 8 games, and just 1 of 3 road games. Even Miami, with a 2-7 record overall, has covered the spread at a higher rate this season.

That being said, if you just look at the numbers, we think this matchup is a recipe for disaster for the Dolphins. The Ravens gave up over 500 total YPG in their two losses this season, including 409 passing yards per game. Miami's offense is 30th in the league in total offense and dead last in total offense in home games.

The bigger issue, and perhaps the issue that puts Miami's anemic offense into the spotlight is on the other side of the ball. Baltimore is 2nd in the NFL, averaging just under 428 total yards per game. Miami is 30th in the NFL, allowing 391 yards per game, and that includes home games against Houston, Atlanta, and Jacksonville.

If Baltimore scores at ease, Miami is going to be in real trouble as they stand no chance of keeping pace if this one turns into a shootout.

The reason this line is moving away from the Dolphins is that there is really only one team to back here. Miami was able to lean on it's defense to go 4-1 as a home underdog last season. They are 0-2 as a home dog this season because the defense is allowing 31 PPG as a home underdog, while the offense has averaged only 8.5 PPG.

Our models have this game going slightly over, but with Baltimore cruising to a 32-17 win on the road. We are backing the road favorite and laying the 7.5 here.

Be sure to check out our Mike's picks for best bets from the entire NFL Week 10 slate as well as Max's favorite Week 10 teaser. I also shared my thoughts and optimal lineup for the DraftKings Showdown contest for this game, which includes a contest with a million-dollar top prize.

With a game script that we think favors a double-digit lead for the Ravens, we like backing Lamar Jackson to shred the Dolphins defense early and Miami's passing attack to rack up some yardage as they are forced to play from behind relatively early here.

This number is way too low to hold up throughout the week. Jackson has gone over 312.5 total yards in 7 of 8 games this season and is averaging over 351 yards per game. Facing the league's 30th ranked defense in total yards and passing yards allowed, Jackson should cruise past his season average. We would bet this number up to 335 total yards.

Gesicki has a clear path to a big game here as Baltimore has been terrible against opposing tight ends this season and we expect Miami to be playing from behind for the majority of the game. Baltimore has given up monster games to several tight ends already this season, including 3/91/2 to C.J. Uzomah, 6/46/1 to Noah Fant, 7/109/1 to Travis Kelce, and 10/105/1 to Darren Waller. Gesicki is averaging just under 70 YPG over his last seven games and has gone over 53.5 yards in 5 of those 7 starts.