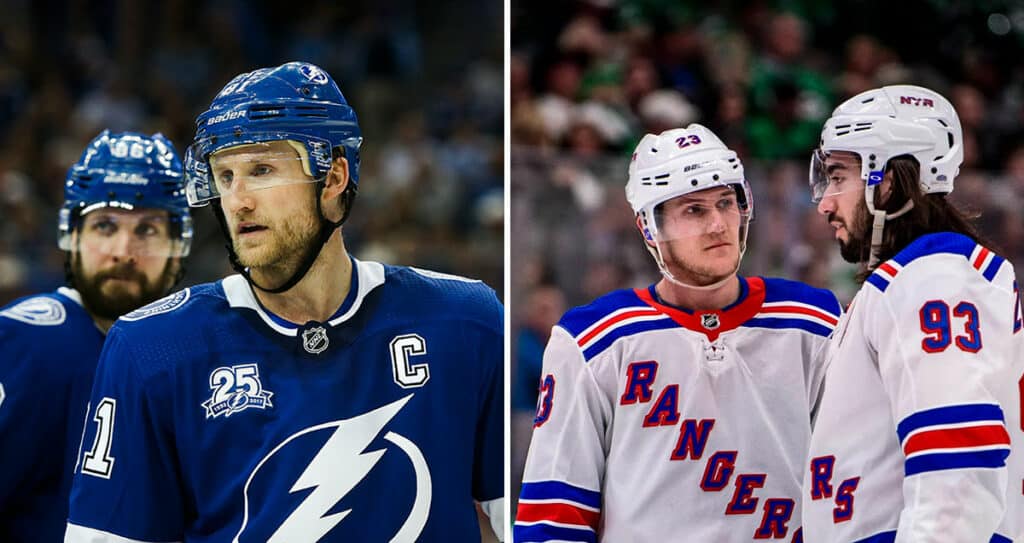 Tampa regained their footing in game 3, but will that carry over to game 4?
By Bill Christy on June 7, 2022

Game 2 of this series was extremely kind to us, as we went with a 4-0 sweep on our plays. The Rangers got the job done in regulation cashing out +110 ticket. Our props hit with relative ease as well. Stamkos was unable to snag a power play point which allowed us to cash our juiciest ticket at -140. Our even money play on the over 1.5 goals in the 1st period cashed inside the 1st 6 minute of the game and Corey Perry picked up his lone point with just 2 minutes to go in the game to cash at +125.

We stayed away from Game 3 to digest and take in what changes, if any were made by the teams. After scoring being at a blistering pace in the 1st period of the 1st two games of the series, we saw a scoreless 1st period in Tampa in Game 3. However, the Rangers looked to have thing in control when they took a 2-0 lead midway through the 2nd period.

Kucherov answered just over a minute later on the power play to cut the lead in half. Stamkos evened things just 1 minute and 22 seconds into the 3rd on another power play goal. New York killed off 2 more penalties in the period and Tampa did the same on their lone short-handed shift.

Ondrej Palat became the hero for Tampa Bay as he found the back of the net with just under 2 minutes remaining in regulation to give Tampa their 1st win of the series and breath some life into them as they head into this Game 4 matchup.

Ryan Strome left last game and is questionable for this one for New York. This could be a factor but I like Tampa to tie this series up and do so in regulation. I wouldn’t be against a small sprinkle on the -1.5-puck line for +150 either. I really think this game will dictate how the rest of the series will go. If New York is somehow able to steal this one, they will end it in Game 5. However, we believe Tampa wins game 4 on Tuesday evening.

Steven Stamkos OVER 3.5 Shots on Goal

Stamkos has put up 2 games with 6 shots on goal with a 3 shot game sandwiched between. With our belief in Tampa getting this series back to even, it will need to have pressure from Stamkos on the offensive end. He averaged just under 3 shots per game in the regular season but is at a 3.2 average in the postseason. That trend continues in Game 4.