Raiders at Rams: Our Best Bet for Thursday Night Football 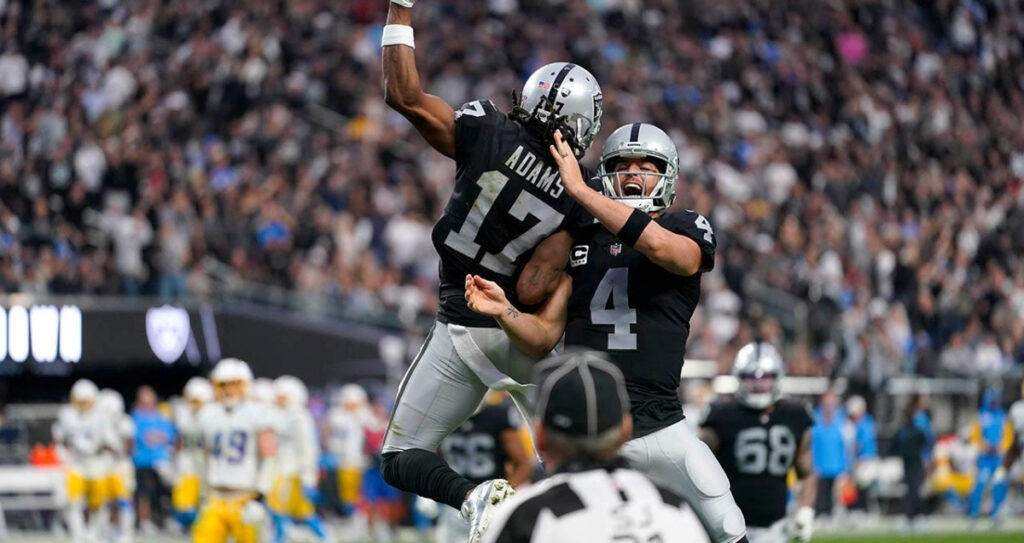 Davante Adams and Derek Carr should do just fine against this Rams secondary on Thursday Night Football.

Week 14 of the NFL regular season kicks off with the Las Vegas Raiders (5-7) heading west to take on the defending Super Bowl champion Los Angeles Rams (3-9). The Raiders are desperately trying to get back into the thick of the AFC Wild Card race while the Rams' season is pretty much over. Las Vegas has won 3 straight games, while Los Angeles has dropped 6 in a row.

Need some help betting on the Thursday Night Football matchup? Get our best bet for Raiders at Rams right here and start your NFL week off on the right foot. The Rams are severely undermanned, but can they hang within the point spread?

Live Odds for Raiders at Rams

Las Vegas opened up as 4-point favorites on the look-ahead line, and it's been pretty much nothing but Raiders money coming in ever since. 78% of the tickets so far have been on the Raiders, which has pushed the line all the way out to Las Vegas (-6) at most sportsbooks.

As for the total, it opened at 43 but has been pushed to as high as 44.5 at some shops. So far, only 52% of the tickets have been on the Over, so some of that had to have been some sharp money. It's easy to understand this move because both of these defenses rank in the bottom third of the NFL in points per game allowed.

Who Will Play QB for the Rams?

This one remains a mystery! Matt Stafford is on IR, and John Wolford is currently listed as questionable with a neck injury. He was a limited participant in Tuesday's practice.

If Wolford can't go, former Virginia Cavalier Bryce Perkins may get the nod. Perkins hasn't seen much NFL action, but this kid would add some much-needed excitement to the Rams' offense with his legs.

However, Perkins may not see the field in this one because the Rams just claimed Baker Mayfield off waivers. The former Heisman winner would definitely be the Rams' best choice, but he's only had 2 days to learn the playbook.

We're never crazy about laying points on the road in NFL games. That being said, the Rams have been decimated by injuries and are an automatic fade for us at this point. Not only is Stafford out, but Cooper Kupp and Allen Robinson are on IR as well.

To make matters worse, All-Pro DT Aaron Donald may also miss this game with an ankle injury. That would obviously have a negative impact on the Rams' ability to rush the passer and stop the run. Starting linebacker Terrell Lewis is also listed as questionable.

The Rams are just 3-8-1 against the spread this season. Other than star corner Jalen Ramsey, their secondary is pretty weak. Los Angeles ranks 23rd in yards per pass allowed and 22nd in passing yards allowed.

Derek Carr could have a huge game picking apart this Rams' defense, especially if Donald doesn't play. Davante Adams has been playing like a man possessed of late. The former Fresno State star has racked up 126 or more receiving yards in 4 of his last 5 games.

Also, don't forget about Josh Jacobs. The former Alabama standout leads the league in rushing with 1,303 yards. He's also tied for 3rd with 10 rushing touchdowns this season. Though Jacobs is listed as questionable with a quad injury, all reports expect him to play.

The Rams' offense has been a joke the entire season. They rank dead last in yards per play and next to last in yards per rush. Mayfield may provide a small spark if he plays, but how much will he really upgrade this anemic offense?

From a power rating standpoint, this number looks too high on Las Vegas. That being said, the Rams are a mess right now and too wrecked with injuries to be able to put up much of a fight. We think the Raiders win this one by double digits.