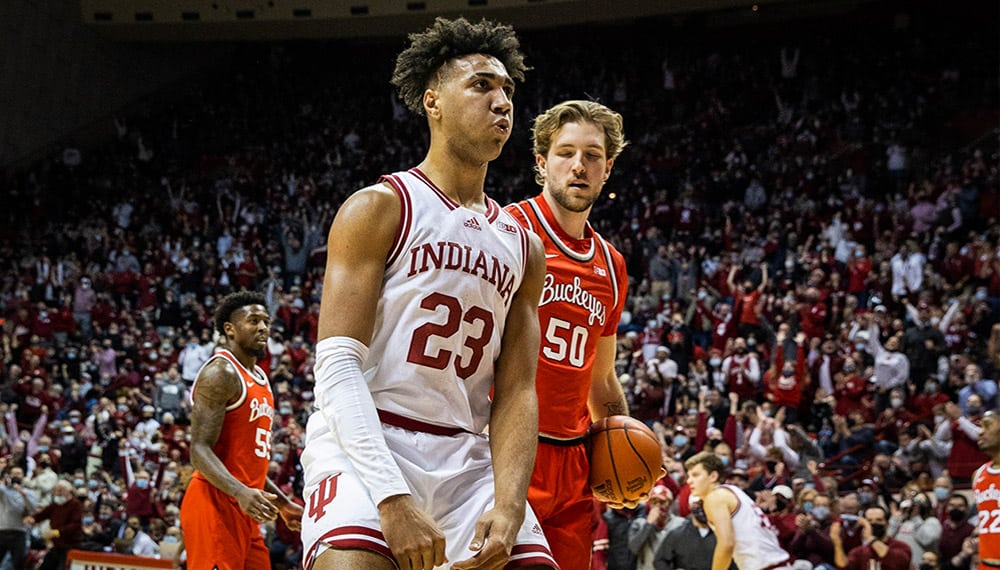 Assembly Hall will be rocking Thursday night when #4 Purdue (-3.5) comes to town to take on Indiana. Purdue comes to town with a 15-2 record including 4-2 in the Big Ten. Indiana also has four wins in the conference along with three losses and a 13-4 mark through the early half of the season. Purdue has a winning road record on the season but Indiana has been a perfect 11-0 at home on the year.

Purdue has scoring threats all over the floor but Jaden Ivey leads them all with 16.2 points per game. Along with Ivey, Purdue has two of the best big men in the conference, if not in the country. Zach Edey and Trevion Williams are combining for 29 points and 16 rebounds per game. The Hoosiers have been led by Big Ten Player of the Year candidate Trayce Jackson-Davis. He is averaging 19.5 points and 9.5 boards per game.

This game will likely play out like an old-school smash-mouth Big Ten football game, with these talented big men battling out in the paint.

In the Big Ten, every road game can be a test, but facing Indiana at Assembly Hall at 11-0 on the season will be a tall task. The Indiana fanbase can be one of the most intimidating in the conference so the Boilermakers will have their work cut out for them in this one. Purdue has the #1 offense in adjusted efficiency and will lean on that in trying to pick up the tough road win at Indiana.

The Boilermakers are coming off an impressive road win at #17 Illinois. They defeated the Illini 96-88 in double overtime. Their offense was clicking on all cylinders. As a team, they shot 45.6% from the field and knocked down 8 timely threes on just 18 attempts. They also made the most of their free-throw opportunities going 26 of 32. Ivey finished with 19 points and 8 boards while Edey had almost identical numbers finishing with 20 and 8. However, the story was the play of Sasha Stefanovic who led the Boilermakers in scoring with 22 points and 8 boards while knocking down 5 of 8 from beyond the arc. It will take a similar performance Thursday to get the tough road win at Indiana.

Indiana’s extreme success at home this season has come by way of their defense. On the season the Hoosiers are allowing 75 points per game to their opponents in comparison to just 56.25 points while at home. Opponents are shooting just 33.4% from the field including 26.6% from deep compared to 48% and 34% in all games. This tough home defense will be tested as the Boilermakers are averaging 86 points per game.

The Hoosiers are coming off a split road trip as they lost in Iowa 83-74 but followed that up with a solid win over Nebraska 78-71. Indiana finished the game shooting 54% from the field which offset the Cornhuskers 47%. Trayce Jackson-Davis was dazzling and picked up his fourth straight double-double. His 23 points led all scorers as did his 12 boards. Race Thompson and Jordan Geronimo combined for 22 points and 15 boards in the win. If the Hoosiers could parlay this type of offensive output along with their top-notch defense, they could knock off #4 Purdue Thursday.

As we hinted to in the intro to this article, Indiana has been really good at home this season and the trends here hold up. The Hoosiers are not only undefeated in Assembly Hall but are a perfect 8-0 ATS. Purdue, on the other hand, is yet to cover as a road favorite this season:

Purdue is 0-2 ATS as road favorites this season.

Purdue is coming off an emotional overtime win against arguably their toughest opponent of the season. There is sure to be a letdown as they head to Indiana. This should be the last place a team set up for a letdown should beheaded. The Indiana defense will suffocate the normally efficient Purdue offense. With their offense running into this roadblock of a defense, Purdue will find themselves in the place they haven’t been in all season. Indiana will get the cover and may even be worth a sprinkle on the moneyline.

The story of the game will be the defense of Indiana frustrating the Boilermakers. In their 11 home victories, the Hoosiers have played to the under in 7 of those games. If I had to chose between the spread and the total, I would feel more confident taking Indiana and the points. However, the under here is certainly a viable option.