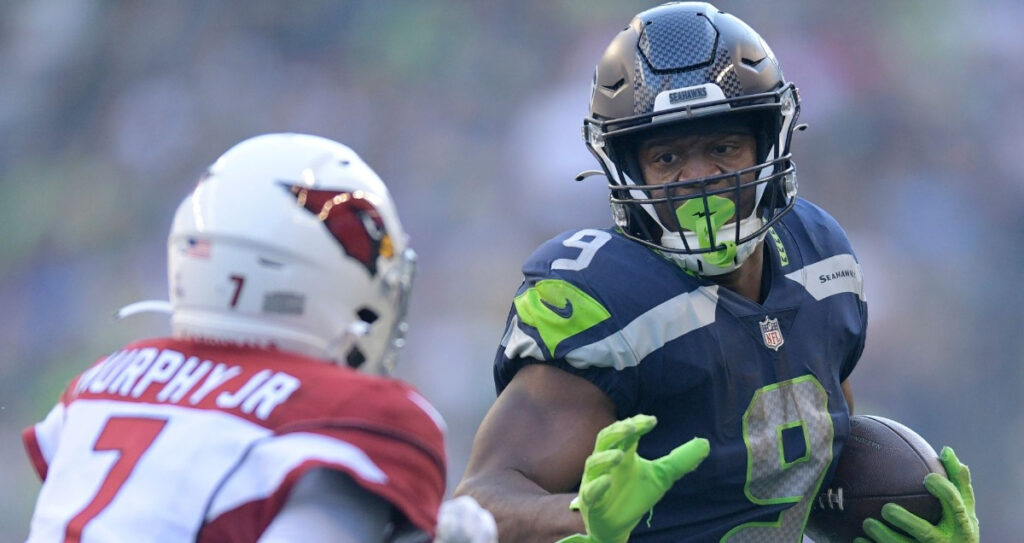 Our favorite player prop for NFL Week 7 is Kenneth Walker to go Over his rushing yardage total.

Welp, overtime burned us a little bit on Monday Night Football. We were all set to cash our Austin Ekeler Under 13.5 rushing attempts prop and move to 3-1 on the evening. Unfortunately, the extra stanza allowed the Chargers to hand Ekeler the ball a few more times and knock us back to 2-2.

Overall though, last week was good to us, as our player prop bets finished at 5-3. We're now sitting at 28-16 on the season, so all in all, we can't complain too much about last night's bad beat.

Here are our PrizePicks and Underdog props picks for NFL Week 7. Also, don't forget about Thrive Fantasy, which offers even higher payouts than most DFS sites. If Thrive Fantasy is available in your state, we highly recommend checking them out.

This Seahawks offense just keeps shocking people this season, as they rank 2nd in the league in yards per play (6.2) and 4th in yards per rush (5.3). Seattle's offensive line should be able to create plenty of push against a Chargers defense that ranks 31st in yards per rush allowed (5.6). The spot is also a tough one for Los Angeles, as they needed overtime to beat Denver on Monday Night Football.

Walker has been a beast since Rashaad Penny went down. The former Michigan State Spartan has easily surpassed this rushing yardage in back-to-back weeks against two pretty tough run defenses in New Orleans and Arizona. We love the fact that Walker got 21 carries last week while being on the field for 69% of the team's snaps.

Our main concern here is that Seattle only runs the ball 40.82% of the time, which only ranks 15th. That being said, Walker may not need very many carries to get over this yardage number, as he averaged 11 yards per rush a couple of weeks ago against the Saints. This looks like an easy Over!

Zeke is finally healthy this season and is showing more of his old burst at times. The former Ohio State Buckeye shouldn't have any problems finding holes to run through against a Lions squad that allows 5.5 yards per rush (30th).

Dak Prescott is expected to be back this week, but that actually makes us like this play even more. With Prescott being undoubtedly rusty, Elliott may get even more carries. Dallas is also a seven-point favorite, which means that they may try to bleed the clock with running plays later in the game if they have a big lead.

Tony Pollard continues to get on the field quite a bit for the Cowboys, so that is something to worry about with this play. Even still, Elliott is the feature back and is usually on the field for about 65% of the snaps. We'll ride the Over!

We love T-Mac but we wonder how productive he'll be with Taylor Heinicke back under center due to Carson Wentz's injury. Washington hasn't been very explosive through the air this year as they only rank 28th in yards per pass (5.8).

The matchup this week is a tough one for McLaurin. He'll be lining up against Jaire Alexander, who is one of the best corners in the league. A bad matchup and a rusty QB should lead to an Under for McLaurin this week.

Green Bay is solid against the pass, as they lead the league in passing yards allowed per game (164). Washington's offensive line is also one of the worst at pass protection, as they allow a sack rate of 9.02% (27th). The Packers should also be highly motivated after getting blown out by the Jets last week.

It's great to see Wilson back in action for the Jets. He's 3-0 since returning from injury, but we think he'll struggle against Denver's stingy secondary. The Broncos are 1st in yards per pass allowed and 5th in passing yards per game allowed.

Wilson only threw for 110 yards against Green Bay last week and this Denver secondary is even better. Robert Saleh knows that the best way to attack the Broncos is on the ground, so look for a steady diet of Breece Hall and the Jets' running game.

The former BYU standout has only played Denver once in his career and he threw for 160 yards. We think he'll throw for even less than that on Sunday. Take the Under!

Best of luck with all your NFL Week 7 action! Let's keep putting 'em in the win column!