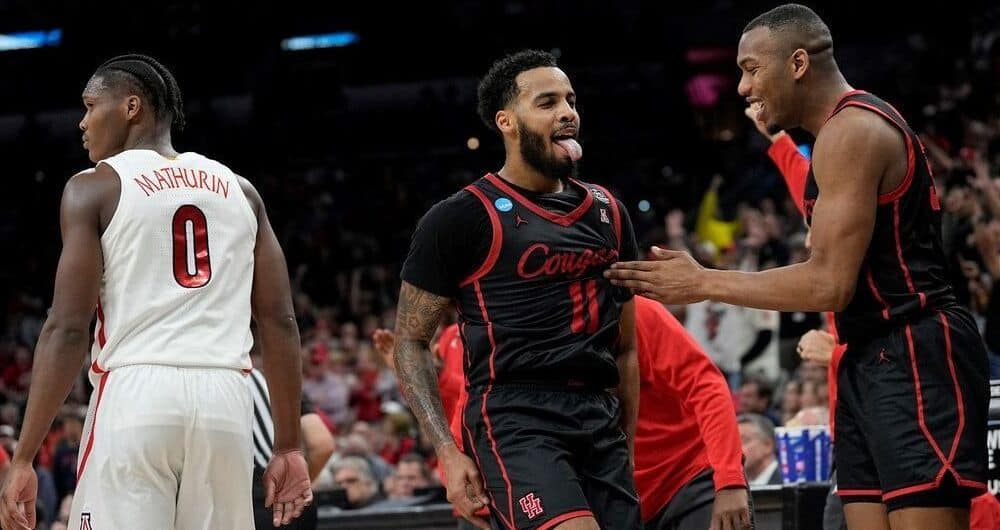 The madness of March continued during Thursday's Sweet 16 games. Two #1 seeds went down as Gonzaga was ousted by Arkansas and Arizona was shown the door by Houston. All three games on the Friday slate should be fun to watch, so be sure to check out our best bets and best prop bets for those.

The Elite Eight will tip-off on Saturday, March 26 with Houston taking on Villanova and Arkansas facing Duke. If you're looking for some extra action, here are our best CBB player prop bets for Saturday's Elite Eight games. As usual, FanDuel Sportsbook is the only book to have props up this early so all lines are available there.

We have a great deal of respect for Collin Gillespie because he's had a fabulous five-year career at Villanova. However, we don't see him faring well against a Houston defense that just shut down one of the best offenses in the country (Arizona). Sure, it's tough to bet against a player of Gillespie's stature, especially since he's averaging nearly 16 points per game this season.

But with all that being said, Gillespie hasn't quite found his rhythm in the NCAA Tournament. The 6-3 senior was held to just 12 points against Michigan and only 14 points against Delaware. Sure, Gillespie went off for 20 points against Ohio State, but keep in mind that he only hit 5 of his 14 field goal attempts in that game.

The Cougars are one of the best defenses in the country and they look like a team that is hungry to return to the Final Four. Houston only allows 59 points per game, which ranks 3rd in the nation. They also rank 1st in opponents shooting percentage (37.4%).

The bottom line with this bet is that Houston has enough horses on defense to keep Gillespie contained. While most of the public will probably play this point total Over, we'll go against the grain and take the Under!

What a run by this Blue Devils team in Coach K's final season! Duke beat a very good Texas Tech team and they should have an offensive advantage against this Arkansas team. We jumped on Wendell Moore to go over this point total right away since it looks to be a point or two too low!

Moore has put together a solid junior season for the Blue Devils. He's averaging 13.5 points per game and is one of the reasons that Duke has made such a deep run in the Big Dance. We think Moore steps up in a big way in this Elite Eight game against the Hogs.

The 6-5 forward has shot the ball well all season long, as he's hitting 50.9% from the field. He's also shooting a very respectable percentage from three-point land (41.1%). Arkansas is a solid defensive team but they only rank 105th in three-point percentage allowed.

When looking at some trends, they definitely point to Moore going Over this point total. In 37 games this season, Moore has scored 13 points or more in 22 of them. That makes the plus money price seem even more attractive.

We also love the fact that Moore is a very good free-throw shooter. He's hitting 80.4% of his shots from the charity stripe this season. Give us the Over on this one! Enjoy all of the Elite Eight games this weekend!