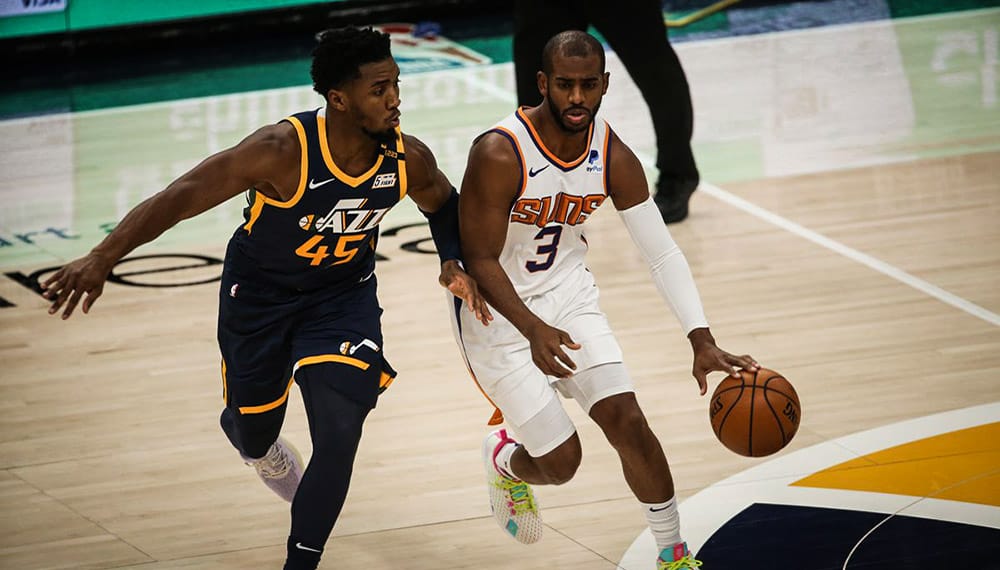 NBA fans are treated to what should be a fun game Wednesday night when the Northwest Division leading Utah Jazz welcome in the top team in the NBA, the Phoenix Suns. Some believe this could be a preview to a future Western Conference final. If so, it will be the 1st time since 1991 that these teams met in the postseason. However, it has been just hours since they last met in the regular season. Monday the Suns grabbed a 115-109 win at home against these Jazz.

The Suns are in the midst of another win streak, this one currently at 7 games and will look to extend to an 8th in Utah. The Suns have been dominating against Western Conference opponents that are not in their division, they hold a 18-3 mark in those scenarios. For the Jazz, it has been a bit different. They are 10-0 against their divisional opponents but just 9-8 against the rest of the Western Conference.

This Phoenix Suns team has been impressive all year but the place they have been most impressive and particularly lately, has been on the road. In fact, with a win Wednesday night in Utah, they will have a better road record (19-4) than at home (19-5). During their current 7-game win streak, 5 of their wins have come on the road.

Monday, in the win against Utah, the Suns jumped out to a 10-point lead after the 1st quarter. They saw that cut to 2 at the break and then actually trail by 2 heading into the 4th. They outscored the Jazz 30-22 in the final period to get the win but as 12.5-point favorites, this was far from a strong performance. The Jazz were without almost their entire starting lineup. This may be the case again when they meet as Gobert and Mitchell are already out and Ingles, O’Neal, and Bogdanovic are all questionable. The Suns will need to play as if all of these contributors are on the floor because that certainly was not the case Monday night.

Utah Looks to Turn the Page on January

The month of January has not been kind to the Utah Jazz. The injury bug has hit them hard and their record shows it. At 4-9 on the month, they not only have a 4-game separation between themselves and the Denver Nuggets in the Northwest Division. Role players need to step up if the Jazz hope to keep their divisional lead.

In the loss on Monday night, it was rebounding that killed the Jazz. They were outrebounded 51-38 and more importantly, allowed the Suns to grab 18 offensive rebounds. This allowed the Suns to shoot a lower percentage and still come out victorious. The Jazz took 18 fewer shots than the Suns thanks to the dirty work of Biyombo and McGee who combined for half of the Suns offensive rebounds. They Jazz will need to be stronger on that front Wednesday night in order to change the outcome from Monday.

Betting Trends for Suns at Jazz

I expect the Suns to come out highly motivated in this game. The scare that was put on them as they headed into the 4th last game with a 2-point deficit to a much inferior team should leave a bad taste in their mouth. The 10-point lead we saw the take after the 1st quarter last game is something they will not surrender again in this one. I believe the Suns will get out early and keep their foot on the gas throughout the entire game.

The Suns have been allowing just 104 ppg to their opponents this season. The Jazz, without the majority of their starters put up 109 Monday. I don’t see this happening again and expect the Suns to keep them below the century mark in this one. The Suns, on the road, hold opponents to just 44% from the field and 32% from long range. The Jazz are going to have a hard time keeping pace this time and the under should come in for us.