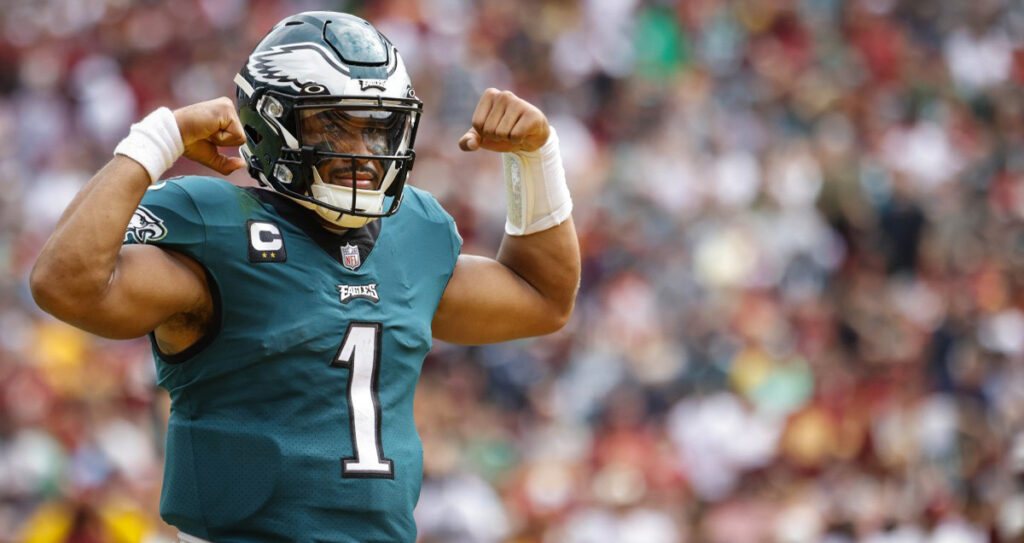 We expect Jalen Hurts to have a big game on Sunday night and to go over his passing yards prop.

The Sunday Night Football matchup for Week 12 has the Green Bay Packers visiting Philadelphia to play the Eagles in a game where Philly is favored by 6.5 and the total is posted at 46.5. It is somewhat of a surprise that the number is within a touchdown given how poorly the Packers have played this season relative to expectations while the Eagles are on top of the league.

There are large disparities between these two teams in the season-long stats. Philadelphia ranks in the top 10 in scoring offense, scoring defense, turnover margin, rushing yards, and passing defense. Green Bay is in the bottom 10 in the league in scoring offense, turnover margin, and rushing yards allowed per game. It will be interesting to watch if these differences in performance hold on the field Sunday night.

We halted our recent skid of SNF prop plays with a 2-1 result last week. Isiah Pacheco and Justin Herbert both cashed their rushing yard and passing touchdown plays, respectively. Austin Ekeler had a great performance in the game to cost us the under play on his rushing yards.

With that said, we bring you another round of SNF player prop best bets for this matchup of NFC teams in Week 12.

In his last five games, Jones has alternated between rushing for 40 yards or less and rushing for 135+ yards. Last week happened to be one of those off weeks and he gained just 40 yards on 12 carries in a Packers’ loss to Tennessee. Against Buffalo and Dallas in that stretch, Jones carried 44 times for 281 yards and a touchdown. Against Philadelphia’s stingy run defense we predict Jones will continue his recent pattern and hit the 60-yard mark in this matchup.

The perceived strength of the Green Bay defense is their secondary which is allowing 192 yards per game to opposing passers. That’s 4th-best in the NFL. Over their last three games, they’ve allowed teams to throw for nearly 50 yards per game beyond that mark, and those opponents include the Lions and Titans.

Hurts, on the flip side, has had two straight games throwing for fewer than 195 yards. The result? The Eagles lost at home to Washington and needed a last-minute touchdown drive to beat the rudderless Colts. We see those results translating into a game plan that will test the strength of the Packers’ secondary and leverage the weapons that Philadelphia has in the pass-catching department. The loss of Dallas Goedert to injured reserve is certainly a blow to their offense, but AJ Brown, DeVonta Smith, and others will step up to make up for his absence.

Rodgers has made a career out of taking care of the football which makes the 2022 season an anomaly. His seven interceptions through 11 games mark his most in a season since 2016 and he’s likely to hit double-digit picks for the first time since 2010 if his current pace holds.

The offense has changed around him without a reliable deep threat, and his 6.9 air yards per attempt in 2022 are his lowest in a season since becoming a starting quarterback. Philadelphia leads the league in interception rate this season and will capitalize on at least one errant throw from Rodgers.