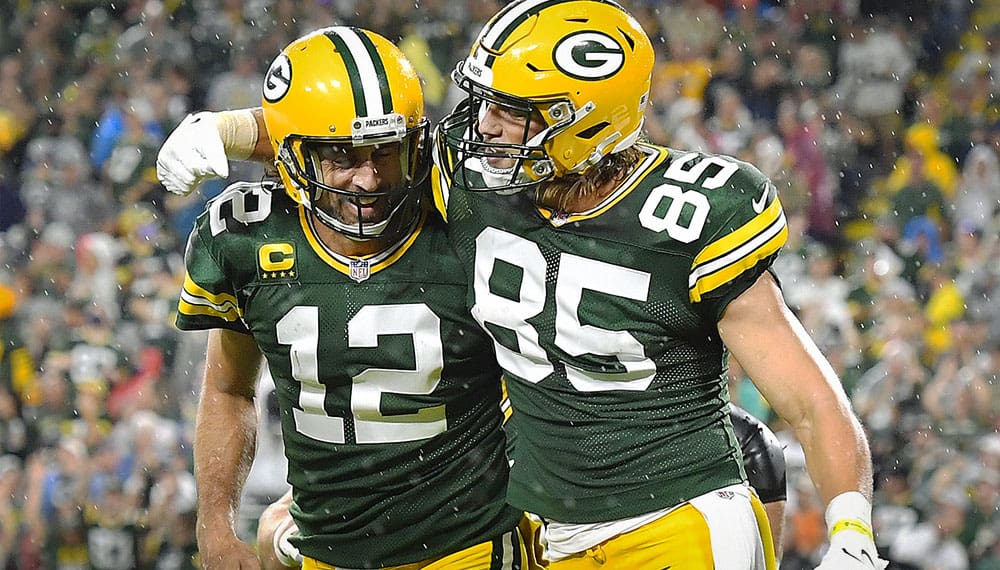 The Green Bay Packers (6-1) travel to the Arizona Cardinals (7-0) in what looks like the best Thursday Night Football matchup we have had so far this season. Green Bay will likely be without receivers Davante Adams and Allen Lazard as they were placed on the COVID-19 list and will need two negative tests, 24 hours apart in order to be eligible to play on Thursday night.

As if finding an edge in these single-game DFS contests was not hard enough, throw in the absence of Adams and Lazard and this could be one of the toughest DraftKings Showdowns of the season. We will share our thoughts on this matchup and how we constructed our favorite lineup for this contest.

Our Lock Picks for the Thursday Night Showdown

As always with these single-game contests, let's start with players we see as locks to make our lineup on Thursday night. This is another matchup where we think you have to start any lineup with both quarterbacks.

Given Rodgers and Murray are likely going to finish Thursday night as the top two scorers, you have to start an optimal lineup with both guys. While you could make an argument for fading Rodgers in a run-friendly matchup, without his top two wide receivers, we would point out that he had 627 yards and 7 touchdowns in his two games without Adams last season.

The numbers look great for both of these passing defenses, but both have been beaten when tested this season and have benefited from relatively soft schedules over the first seven weeks of the season. We wouldn't bet against either of these QB's regardless of the matchup.

Green Bay has been extremely susceptible on the outside since the Jaire Alexander injury and has been particularly soft on the right side of their defense, which happens to be where Hopkins primarily lines up.

Looking back at the two games that Adams missed last season, Jones and Williams combined for 319 yards and 2 touchdowns. That includes a combined 16/162/1 receiving over those two games, incdicating the Packers consciously leaned on their backs in the passing attack with Adams out.

We noted in our props article for this game that we think Jones going over his total yardage number is a lock, and see him going for 120 total yards and a touchdown against a soft Cardinals run defense. Arizona is giving up 5 YPC through their firt seven games which ranks 31st in the league.

Tonyan's ownership should not be too high given Arizona has the league's top defense against opposing tight ends. We would point out the Cardinals have not yet faced a top 15 fantasy tight end this season.

Something has to give if you are paying up for the four highest-priced active players in a Showdown slate, and to make this work we elected to play the criminally underpriced A.J. Dillon in the captain spot. Dillon averages 5x his salary for this Showdown slate and has a 13x game already this season.

We don't need a lot for him to pan out on Thursday night, but don't be surprised if Dillon has a larger than normal role on Thursday night. His best game of the season (17.9 fantasy points) came in the Packers' toughest game and only loss. If Green Bay leans on the run to keep Murray off the field and hide a wounded group of receivers, Dillon has a clear path to double-digit fantasy points.

In addition to this lineup where we 'punt' at captain, we have an alternative build that pays up for Murray at the captain spot. Both lineups are featured in the image below.