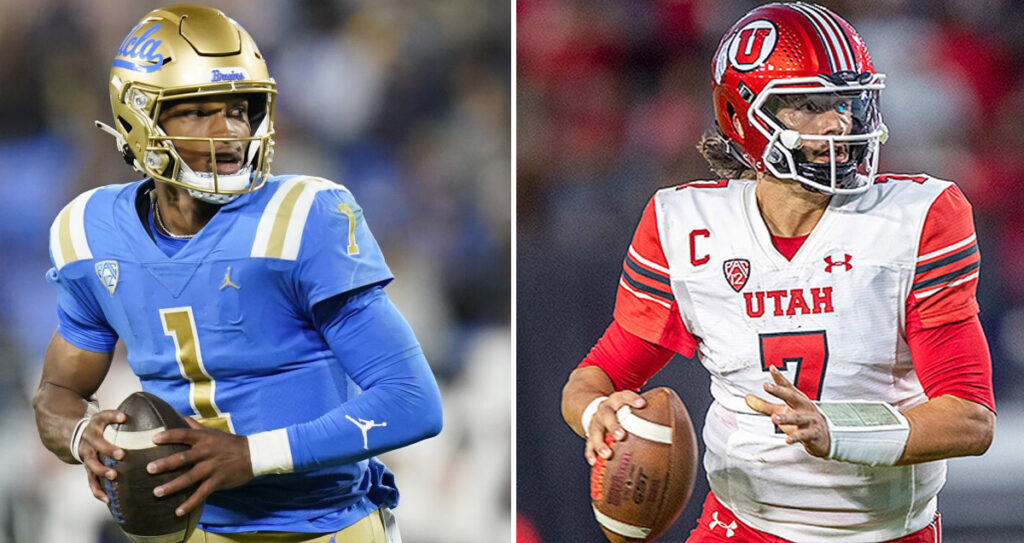 USC may be the betting favorite, but UCLA and Utah will be tough outs in the Pac-12 South this season.
By Bill Christy on July 8, 2022

The Pac-12 South was rocked by the recent news that USC and UCLA will leave the conference for the Big 10 in 2024. However, with that move two seasons away, let's take a look at what happened in this division last season, each team's odds and win totals for this season, and what our best bets within the Pac-12 South are for the 2022 season.

With Linconl Riley and Caleb Williams in town, it should come as no surprise that the USC Trojans have been popular amongst bettors this offseason. They are currently the betting favorites to win the Pac-12 South at +200. Here are the complete futures odds for each team in the Pac-12 South:

Looking at the strength of schedule for the division for this upcoming season, Arizona and Colorado play the toughest schedules, while UCLA plays the softest. Speaking of UCLA, let's get into our best bets for the Pac-12 South for the 2022 season:

Best Bets for the Pac-12 South

With the overwhelming majority of money coming in on USC, our pick to win the division is the other Big 10-bound LA team, the UCLA Bruins. That being said, our best bets within this division, at least at the moment, target each team's win total.

We like UCLA, Utah, and Arizona to go over their win totals in 2022, while we think USC, Arizona State, and Colorado each fail to top their current 2022 win totals. Find the details for each pick below.

Chip Kelly entered the 2021 season with a 10-21 record since he secured the head coaching position in 2018. He was firmly on the hot seat but lucky for him, he got the most out of his 2021 Bruins. After being 5-4 through 9 games, the Bruins decimated their final 3 opponents by a combined 81 points.

The offense finished 10th in the country averaging 36.5 points per game, which finally lived up to the Chip Kelly standards. Discipline was a major issue for UCLA, they were one of the most penalized teams on both sides of the ball. But things are looking extremely good for the 2022 season.

Dorian Thompson-Robinson and Zach Charbonnet are both back to lead the #10 scoring offense. Charbonnet will look to increase his 1100 yards and 13 touchdowns on the ground last year. Thompson-Robinson lost Kyle Phillips but picked up Duke transfer, Jake Bobo who should be set to fill Phillips’ role.

They added a bunch of defensive transfers to go with the new face leading them in Bill McGovern. If he is able to get the defense to do a better job against the pass and force a decent number of turnovers, the sky is the limit for this Bruins team. To win the South Division will be no easy task, but the Bruins get Utah and USC at home this season with only Oregon on the road as a top-tier opponent.

2021 was off to a rocky start for the Utes. Losses to BYU and San Diego State followed an opening win over Weber State and left Utah with a 1-2 record as they geared up to host Washington State. They were able to not only defeat the Cougars but won 9 of their next 10 with the only loss coming on the road to Oregon State. They defeated Oregon in the Pac-12 Championship and earned a Rose Bowl bid but fell to Ohio State after losing their 11-point 4th quarter lead in one of the most exciting Rose Bowls in recent history.

Kyle Whittingham will have his top rusher in Tavion Thomas returning along with Cameron Rising behind center. The best tight-end duo in the country also returns for the Utes in Kuithe and Kincaid. Britain Covey will likely be irreplaceable but the aforementioned playmakers should be enough to keep Whittingham’s offense rolling.

The defense will return 5 starters and the pedigree of Utah’s typically stout defense will be on full display again in 2022. They begin the 2022 campaign with a visit to the swamp to face off with Florida, but much like 2021, the Utes will have plenty of time after to pick up their win total and make a strong run at the Pac-12 title.

Lincoln Riley made one of the most controversial moves last year by departing an Oklahoma program that he helped bring to prominence to head west and lead the Trojans. He inherits a Trojan team that finished with their worst record since the 3-8 season of 1991. They finished the year allowing over 3 points more per game than they scored. It will be a tall task for Riley to turn things around quickly in Southern Cal.

Offensively, Riley brought over Oklahoma transfer, Caleb Williams who looked phenomenal at times behind center for the Sooners last year. He will have a new favorite target in Jordan Addison who they nabbed in the transfer portal via Pitt. The Trojans will have 4 familiar faces on the offensive line which could be the best in the conference, if not the country.

The question marks are all on the defensive side of the ball. The Trojans could not stop anyone on the ground last season and despite a handful of transfers and the hire of Alex Grinch to lead them, we can’t see this bunch competing for the conference title in year one of Riley’s era.

Herm Edwards got his Sun Devils to another Bowl game in year, we’ll call it 3 and a half after the shortened season of 2020 (4 games). Wins over UCLA, USC, ad Washington headlined their season, but were dropped by Wisconsin 20-13 in the Las Vegas Bowl. The defense was the strength of the team last season, holding opponents to an average of just 21.4 points per game, good enough for 20th in the country. The offensive passing game struggled a bit, only gaining roughly 195 yards per game.

2022 will have many questions, not the least being an NCAA investigation that will still be ongoing. Emory Jones will lead the offense after transferring in from Florida and will be throwing to another SEC transfer, Vanderbilt’s Cam Johnson. Xazavian Valladay comes in to carry the ball from Wyoming and will look to put up another season of over 5 yards per carry production. Only 3 starters will be returning for that solid defense and a new coordinator (Donnie Henderson) leaves a lot to wonder if the defense will be up to snuff again in 2022. We are not expecting the Sun Devils to reproduce their win total from last year.

A one-win season is nothing to be excited about, and fans will have little to look forward to. A home win over Colorado 10-3 was the lone win on the season. 17 points per game for the offense was pitiful and the 32.4 they allowed per game was just as bad. They were 130th in turnover margin, averaging a negative 1.5 per game. While 2.5 wins seems like a death sentence for the 2022 season, we believe there are some silver linings.

Washington State defector, Jayden de Laura will be running the offense and have a strong playmaker in UTEP transfer, Jacob Cowing. The secondary is likely to be the strength of the defense with Christian Young returning at safety and Christian Roland-Wallace back at corner. But the offense is likely to be what pushes the Wildcats over the measly 2.5-win total. They get Colorado and in-state rival Arizona State at home which should help them get over their 2.5 win total this season.

A 1-4 start was one that the Buffaloes could never recover from in 2021. They picked up just 3 wins over the last 7 games and finished just 4-8 on the year. The offense for Colorado was one of the worst it had in recent memory. Their run game barely cracked the 110-yard per game average, and the passing was even worse with just 134 per game. Those totals led to a scoring offense that ranked 121st in the country with just 17.3 points per game. The defense was a bit better but 6 conference losses by 15+ points last season is evidence enough that the defense struggled.

2022 isn’t very promising with many players opting to transfer out, unlike their counterparts in the conference that have seen an influx due to transfers. Brandon Lewis will be back behind center but likely will not have enough playmakers at his disposal to make any kind of noise. Outside of the conference schedule, Colorado will also face TCU, Air Force, and Minnesota which will all be a tough task for the rebuilding Buffaloes.