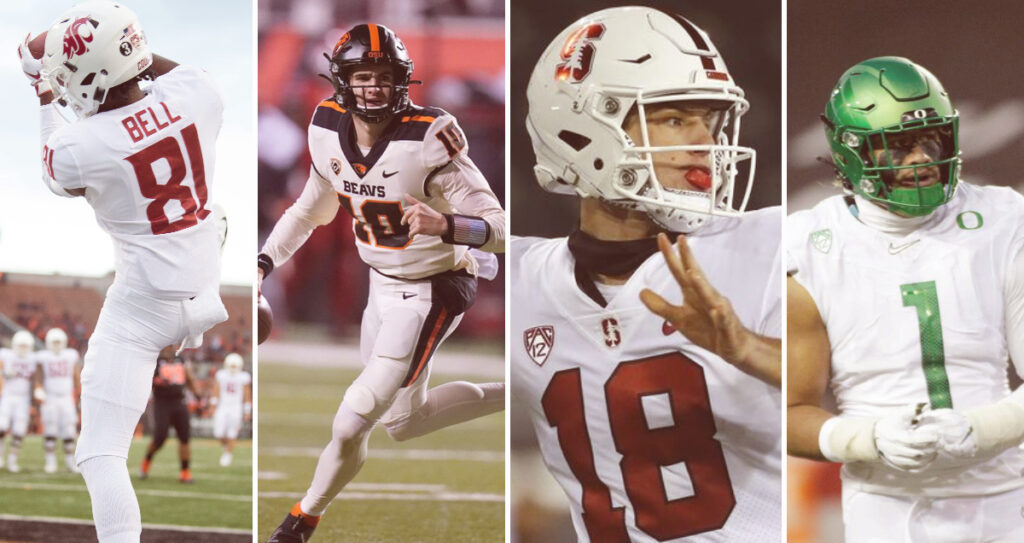 Last week we took a look at the Big 10 and gave out some thoughts on each team's season win totals. Today, we'll dive into the PAC 12 North division and give out our best bets on each team.

As usual, the Oregon Ducks are expected to dominate this division. However, the Washington Huskies may not be too far behind. Let's get to our best bets on each team's total wins and take a look at each team's odds to win the PAC 12 title and national title.

The Ducks of 2021 were off to a hot start. They defeated Ohio State in The Horseshoe in the most anticipated game of the young season. Then, to open conference play, they thrashed Arizona 41-19 and were riding high as they set off for Stanford.

Unfortunately, the Ducks took the Cardinal too lightly and suffered their 1st defeat of the season. They regrouped and won 5 straight games before being upended by Utah on the road. That ultimately set up a rematch with Utah in the Pac-12 Championship game that was dominated by Utah 38-10. The Alamo Bowl set up a matchup with Oklahoma (Loss 47-32) and head coach Mario Cristobal headed to the U to become the next coach of Miami.

With Dan Lanning, former Georgia defensive coordinator, taking over the helm the defense is sure to be a focal point. The Ducks allowed 28.5 points per game last season, a number that will be unacceptable by Lanning’s standards. The Ducks will return 14 starters including their entire offensive line and playmakers.

Anthony Brown graduated and took his 141.1 quarterback rating with him but Lanning brought over an SEC transfer with him to take over the snaps. Bo Nix, the Auburn transfer, finds himself in an offense and program that he likely never expected when his college career began.

Kayvon Thibodeaux will be sorely missed but linebacker Noah Sewell will be back and is primed to add to his 9 tackles for loss from last season. This Ducks team is absolutely loaded and if Lanning can make even marginal improvements with his defense, a Pac-12 title is the goal along with a BCS playoff bid.

It is hard to believe that a 4-8 team from last season will be the 2nd best team in the division in 2022. However, new head coach Kalen DeBoer will bring his brilliant offensive mind along with Indiana transfer Michael Penix Jr. to sling the rock.

Penix’s 2021 season was marred by injury but his 2 seasons previous were filled with consistent production. In 2021, the Huskies finished on an 0-4 mark, which was obvious to all that the team had given up post the firing of Jimmy Lake, who lasted just 13 games.

Jalen McMillan and Rome Odunze should be the 2 that benefit the most from both DeBoer and Penix Jr’s arrival. DeBoer will need to establish a running attack that averaged slightly over 100 yards per game. While the offense was a struggle last year, the defense was solid.

The Huskies finished the season 35th in the country, allowing just 23.5 points per game. If DeBoer can get his defense to repeat those numbers and use his offensive mind to lift that side of the ball to its full potential, The Huskies could be an extremely dangerous team in 2022.

The Cougars had an extremely mediocre 2021 season. A 6-6 record through their regular season was enough to get a bowl bid. They were handed a loss, however, in the Sun Bowl at the hands of Central Michigan 24-21.

It is likely that the 2022 squad will lean on their defense to make strides and go from decent to strong. Jake Dickert is now the head coach after the interim title was dropped. A defense that improved from 2022 to 2021, should translate to an even larger improvement in 2022.

The Pac-12 is certainly a step up from his competition last season but not much in terms of defensive schemes he will face. DeZhaun Stribling and Renard Bell will be on the receiving end of most of Ward’s passes. Wazzu looks to shock a bunch of teams in 2022 and get over the 5.5 total set by oddsmakers.

After starting out 4-1 through 5 games in 2021, the Beavers were only able to go 3-5 the rest of the way. The loss to Utah St in the LA Bowl capped off what was a season filled with ups and downs. Wins over USC and Utah were highlights but losses to Colorado and California magnified the ebb and flow of their season.

The offense was led by a rushing attack that averaged 211.5 yards per game and 30.3 points per game. The defense had trouble slowing down the aerial attacks of their opponents and finish 101st in the nation, allowing over 255 yards per game through the air.

Chance Nolan will be back behind center along with 3 of his offensive linemen that helped the Beavers average over 225 passing yards per game. There are question marks in the backfield with the loss of BJ Baylor.

The defense improved as the season wore on but there will be plenty of work to do for that group. They were susceptible to the big play and did little in terms of pressuring opposing quarterbacks. If the defense can’t make serious strides and the backfield can’t get in line, it could be a very long year for the Beavers.

The last 2 seasons for David Shaw have not been like any others in his tenure. An 11-19 record over those seasons is something Cardinal fans are not accustomed to seeing after a minimum of 8 wins per year from 2011 on.

After a 3-2 start, the Cardinal lost their last 7. Statistically, both sides of the ball struggled and finished over 100th in the nation in points scored and points allowed.

2022 won’t be easy for Shaw and company. They get BYU and Notre Dame in out-of-conference matchups while also facing UCLA and Utah on the road. Throw in USC at home and you have 5 extremely tough games on the schedule.

All that said, we believe in Shaw, and the fact he returns the entire offensive line and QB Tanner McKee should be a huge asset. Shaw has always had efficient offenses and given an entire offseason to work with a group that has a full year under their belt will translate to positive strides for the offense.

Kendall Williamson and Kyu Blu Kelly will anchor a stout secondary that hopes to cut down on the 32.4 points allowed per game last season. Our faith in Shaw alone gives us confidence in the Cardinal getting over 4.5 wins in their “DubClub” this year.

In 2021, the Golden Bears were able to pick up just one victory on the road. A 41-11 demolishing of a Stanford team that was like Jekyll and Hyde all year was that one win. After a 1-5 start, the Bears finished on a positive 4-2 note, including a 24-14 win over USC in the final week of the season.

A bowl invite was not in the cards but there is outside hope that will be a possibility this year. The defense was their strong suit, finishing 23rd in the country, allowing 21.5 points per game. They were also 4th in the country in turnover margin at +0.9. While that was positive, the fact that they could not use that to their advantage enough to get more than 5 wins is a concern.

Only 7 starters will return for the Bears but they did add Jackson Sirmon who could help the defense that will have some turnover in their back half. Offensively, Jack Plummer and Kai Millner will be competing for the starting spot at QB. Plummer transferred in from Purdue where he saw only limited action.

Whoever wins the battle will have to lead a very much-maligned offense that has no notable names as playmakers. We expect Cal to regress this season and fall short of their total wins.