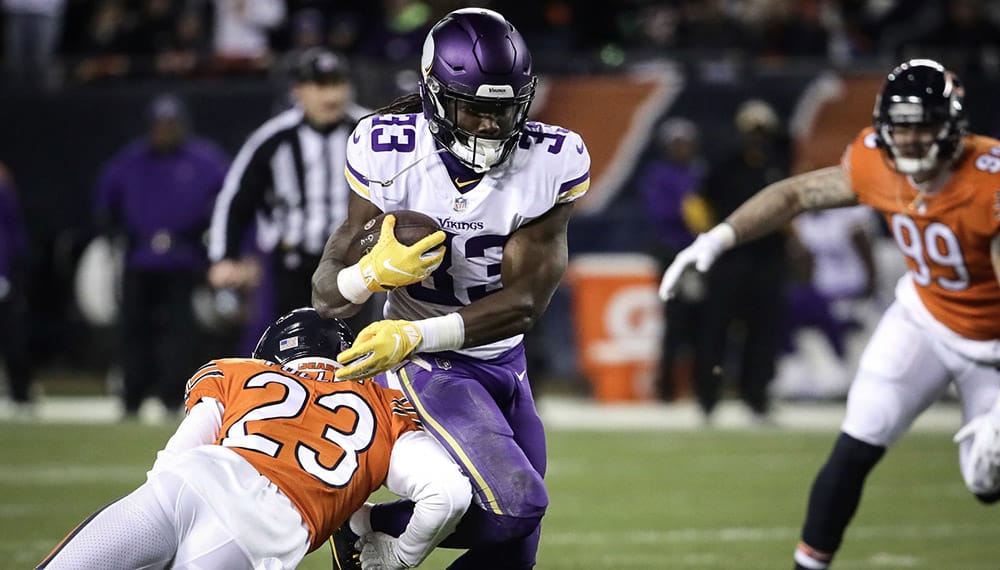 Our Vikings at Bears Picks and Prop Bets for MNF

After a few weeks in a row of huge primetime matchups on Monday Night Football, things return to normal with a mediocre NFC North showdown. The Minnesota Vikings will meet the Chicago Bears in a game that has potential Wild Card implications for both teams. Minnesota could move into a Wild Card spot with a win, while a loss would likely eliminate the Bears' playoff hopes altogether.

If there are any Matt Nagy fans left in Chicago, their days of watching him coach the Bears seem numbered. For Vikings fans, all eyes will be on Dalvin Cook after his fantastic game last week where he looked unstoppable on the ground.

Current Odds for Vikings at Bears

The consensus look-ahead line for this game was Chicago +4 and it ended up opening with the Bears at +4.5. Early action actually moved it towards Chicago but bettors have since hammered the Vikings and it currently sits at +6 at most books.

The total has seen a 1.5 point move up from 43 to 44.5 throughout the week. Here is a look at the best odds currently available for each side of the Week 15 Monday night game:

The Minnesota Vikings have been hot and cold all season long up until this point. They have virtually traded wins and losses back and forth from week to week, and enter week 15 following a win over the Steelers on Thursday night.

Minnesota will be looking to grab a much-needed win in this game as their next two opponents will be much tougher. They will welcome in the Los Angeles Rams next week, they then travel to Green Bay before returning home to play the Bears again in the regular-season finale.

With a huge win in this game, they could climb their way back into the Wild Card race in the NFC that includes the Washington Football Team, Philadelphia Eagles, and several other 6-7 or 7-6 teams.

This may be one of the toughest and tightest playoff races in years in the NFL. Only one of the NFC's sixteen teams has been officially eliminated with only four weeks left in the regular season.

In my opinion, Minnesota may be the best 6-7 team in the league. They also may be the best-positioned team to end up making the playoffs out of a current logjam with New Orleans, Atlanta, San Francisco, and Carolina.

While this defense has too many holes to make a Super Bowl LVI run, the offense is strong enough to get them to the postseason.

The Chicago Bears have been an interesting case all season long. Questions about the Quarterback position and battle between Andy Dalton and Justin Fields are just one of the franchises' many issues this year.

On top of the quarterback controversies, Matt Nagy's job has constantly been called into question as this team is once again in the midst of a very disappointing season.

They are currently on a two-game losing streak, if not for the annual Thanksgiving Day meltdown by the Detroit Lions that allowed Chicago to win the losing streak would be much longer. Chicago has lost seven of their last eight games this season. Five of those seven losses have come by double digits as well so they have hardly been competitive over the past two months.

While a win could keep their faint postseason hopes alive, it is fair to assume the Bears season is over. Chicago will now turn their focus towards the offseason, the draft, and most likely a search for a new head coach as Matt Nagy seems likely to be let go on Black Monday.

My pick in this game is the Minnesota Vikings laying the 3.5 points. Chicago has been terrible over the past two months and now their roster has been picked apart by COVID-19. This just feels like a game where we see the Bears simply quit early.

That being said, I do think Chicago will still manage to score against this struggling Vikings defense, which makes the over, which is amongst the lowest in the NFL for week 15, a great pick as well.

We will sound like a broken record with all of our articles this week but it is crucial we keep an eye on the COVID tracker throughout the week. COVID-19 has wreaked havoc on the NFL this week and the Bears have been hit especially hard with 10 players in COVID/reserve.

Here are two prop bets we love for Monday night based on the current list of active players:

Cooked looked unbelievably good against an awful Steelers rush defense last week, wracking up 224 total yards with a 7.6 YPC average. He gets another soft matchup here with a Bears defense that is 24th in the NFL in rushing yards allowed and will be without several key players this week.

With the COVID issues, a coach that is on his way out, and a season on the brink of collapse, the Bears may not have the will to deal with 25 Cook carries. He should sail past this number on Monday night.

We may think the Vikings cover easily in this one, but we aren't giving that defense any credit. They stink. If the Bears fall behind early, Justin Fields will move the ball through the air.

With Allen Robinson out, Mooney should be extremely busy here. He's averaged 9 targets per game over the past month and should get to that number again here on Monday night. This number is way too low right now and is an absolute lock!