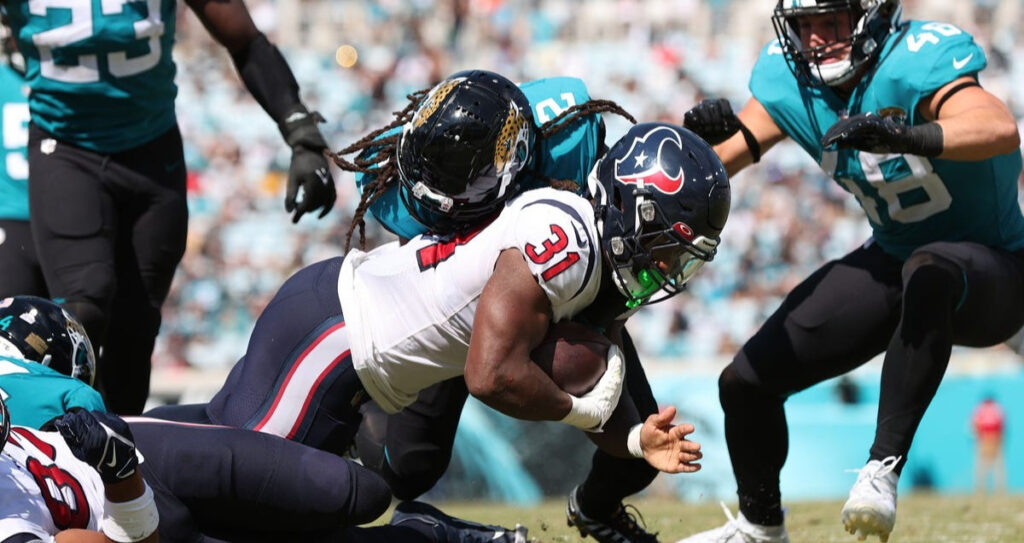 Dameon Pierce has been a beast for the Texans of late and he's a big part of our DFS NFL Week 7 lineup.

Our NFL DFS Week 6 lineup produced 102.6 points, led by Rhamondre Stevenson’s 23.1-point performance as the main beneficiary of touches in the Patriots backfield. That total was good enough for 10th overall among all players in DFS last week.

Stevenson was the only player to score 20+ points in our lineup. Another disappointing performance from our quarterback and receiver group ultimately lost us an opportunity at finishing in the money.

We’re back with a Week 7 lineup in FanDuel’s Sunday Million contest, one that notably won’t include players from the Bills, Eagles, Rams, or Vikings with those four teams on a bye.

Herbert did not throw a touchdown pass last week for the first time since Week 13 of the 2020 season, and the Chargers still defeated the Broncos despite that. What makes that statistic even crazier is the fact that Herbert threw the ball 57 times.

This week’s matchup provides an opportunity for a bounce back with LA facing a Seattle defense that has allowed the 7th-most passing yards and 10th-most passing touchdowns to opponents in 2022.

Pierce is one of a couple of players in this lineup returning from a bye week in Week 7. From Weeks 3-5, Pierce was RB5 and rattled off strong performances one after another as Houston decided to give him the bulk of the work from their backfield committee. He has rewarded both his Texans’ coaching staff as well as fantasy players since then, and we hope the bye allowed him to rest and recharge for another big game.

Walker himself rewarded fantasy players’ faith last week with 97 yards on 21 carries and scored a touchdown for the second straight game. The Chargers have allowed the 10th-most yards on the ground to opposing teams this season and the Seahawks should allow Walker to do his damage in this one.

St. Brown’s cap number has cooled off after missing a game and scoring lower in another following an ankle injury earlier this season. Prior to Week 4, St. Brown was WR4 in half-point PPR scoring and could easily rise into the top 10 again if he’s healthy coming off the Lions’ bye week.

Lazard has scored touchdowns in four of five games this season and has seen 31 targets in Green Bay’s last four games. He’s a reliable, talented option for Aaron Rodgers, especially around the goal line, and we expect him to beat up a Washington secondary that has allowed the second-most passing touchdowns this season.

Pierce increased his snap count to 65% in the Colts’ Week 6 victory against Jacksonville, his highest of the season. He’s hauled in 271 receiving yards over Indy’s last four games and will get more opportunities to contribute against a soft Titan’s pass defense.

Njoku is TE7 on the season and TE5 over the last four weeks, averaging over 11 points per game in that recent stretch of games. Baltimore’s defense has allowed the 4th-most passing yards in the NFL in 2022, and Njoku has emerged as a favorite target of Brissett’s along with Amari Cooper over the last month.

Pollard has been running second fiddle to Zeke Elliott in the Dallas backfield so far this season, getting 55 carries to Elliott’s 94 through six games. Pollard has outperformed Elliott on a pure per-touch basis, but his opportunities haven’t materially increased year over year.

With the return of Dak Prescott likely to happen this week, we are going to take a chance on the Cowboys' back with a lower cap number in the anticipation of a better version of this offense showing up.

Washington will now start Taylor Heinicke at quarterback with Carson Wentz undergoing a minor procedure on his hand this week. Green Bay has the best passing defense in the league this season and will benefit from this QB change as well as an offense that has looked out of sorts for the entirety of this season so far.