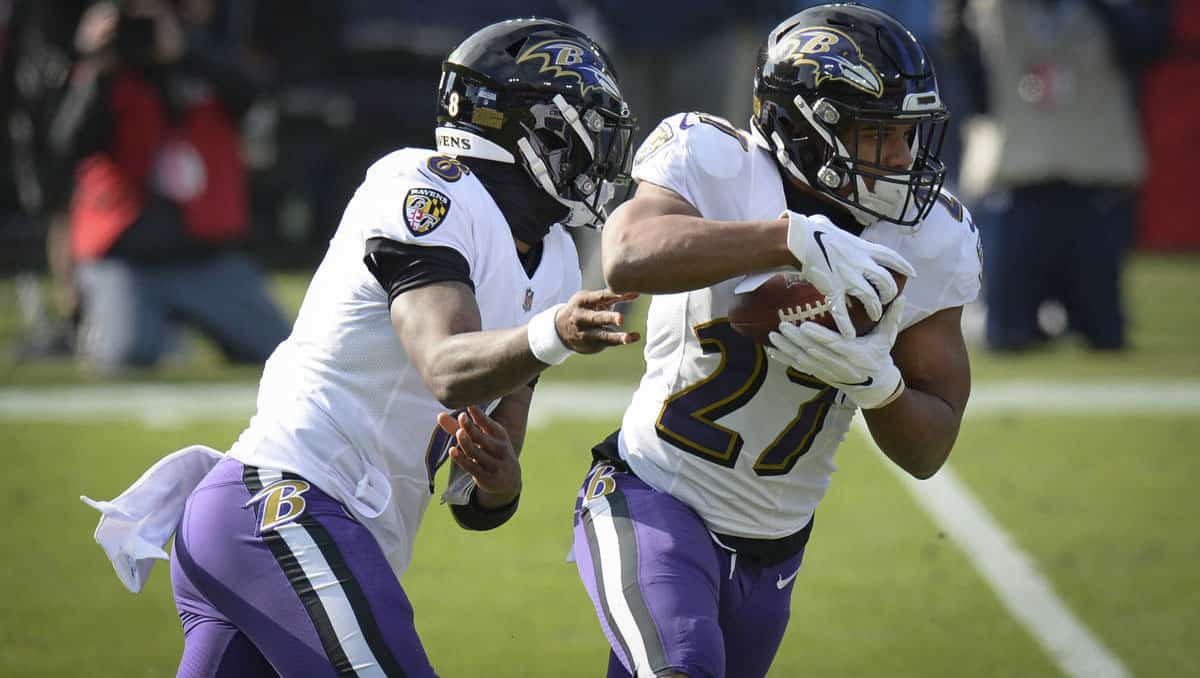 Our Best Bets for Raiders vs Ravens

Only four points? We didn’t believe our eyes seeing the opening line of the first Monday Night Football contest of the 2021/2022 season. Having to lay less than a touchdown with a firmly top ten team against a mediocre Raiders squad felt flat out wrong and early sharp action did agree with that sentiment.

While the majority of books have moved the Raiders to a five-point underdog, bettors can still find Baltimore (-4) at Caesars sports. Here is a look at the best spread available for each side of this matchup:

If you haven't yet tried out the new TwinSpires sportsbook, week one of the NFL season is the time to signup. Any new player that places a $10 week one NFL bet will receive $250 in free bets! Here is how to take advantage of this offer:

What to Expect from the Ravens in Week 1

Baltimore is returning with 24-year-old QB Lamar Jackson, the MVP of the 2019 season. Jackson had a down season in 2020, but still completed 64.4% of his pass attempts and had a 26:9 touchdown to interception ratio. His 99.3 QB rating might be a far cry from his 113.3-rated MVP season, but most experts are expecting a bounce-back year from the youngster.

The run game is captained by Jackson himself, who is coming off another 1000+ yard season with 7 rushing touchdowns. Running back J.K. Dobbins is expected to be the team's starting running back and Ravens coaches believe that the 22-year-old is capable of more and are aiming to get Dobbins more involved with the passing game. Giving Dobbins a bigger role could be a good idea with the Ravens roster only having two capable wide receivers in Marquise ‘Hollywood’ Brown and ex-Chief Sammy Watkins.

Most of Baltimore’s success came from the run game. The Ravens averaged 5.5 yards per carry rushing last season, 0.3 yards more than any other team in the league. They were also the only team that rushed over 3000 yards through the year and reached first downs on 30% of their rushing attempts.

What to Expect from the Raiders in Week 1

Baltimore’s sustained success on the ground won’t bode well for a Las Vegas team that allowed 4.6 yards per carry to opponents (9th worst) and gave up the second-most rushing touchdowns in the league last season. The Raiders also had trouble stopping receivers as they allowed 11.7 yards per reception, the fifth-worst mark in the league.

All this resulted in Las Vegas grading 28th in the league in defensive DVOA. Although the team ended up winning 8 games, their Pythagorean record sat at 7-9 and analytics site Football Outsiders only gave them 6.9 estimated wins based on their performance.

Offensively, the Las Vegas Raiders don’t have too much to work with either. While Derek Carr is certainly a capable quarterback, the offense basically consists of RB Josh Jacobs and tight end Darren Waller, Carr’s absolute #1 target.

The Raiders lost their #1 WR Nelson Agholor to New England this summer, and it might hurt them in Week 1. Agholor was ranked 6th on deep passes with 444 total yards in 2020. A year two jump from Henry Ruggs III might help, but Ruggs only had a 55.6 receiving grade last season and is a big liability when it comes to ball security.

The Raiders also brought John Brown on board and while Brown could be a strong deep threat when healthy, he only had a 66.2 receiver grade last year as he was battling multiple injuries. We would need to see this offense produce, before giving them any credit.

Give us the Baltimore Ravens against the spread in Week 1! The Raiders are seemingly in a constant rebuild and even if their new additions will work, it should take time for their offense to gel. Baltimore is just too good running the ball and the Ravens matchup very well here. We would lay anything less than a touchdown with the road team. Good luck!