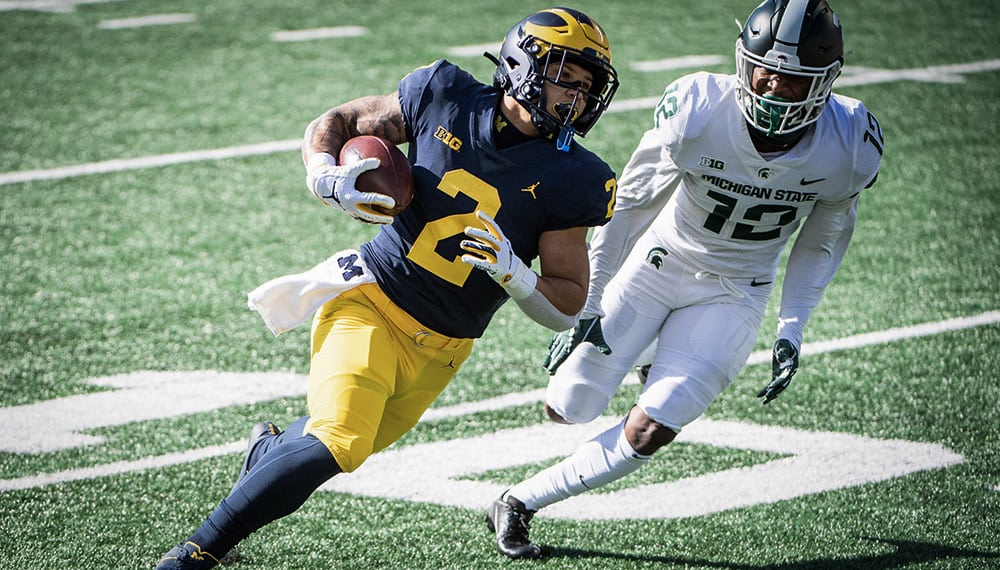 Our Best Bets for Michigan at Michigan State

For the first time in 11 years, Michigan and Michigan State will play each other as undefeated teams. Both teams are a perfect 7-0 and have goals of reaching the College Football Playoff. This is a huge Big 10 matchup as both teams are in the Top 10.

Whoever takes home the coveted Paul Bunyan Trophy will be in the driver’s seat for a possible Big 10 Title Game appearance. In this article, we’ll take an in-depth look at each team on both sides of the ball to determine where the betting edge is. We’ll also give out our Best Bet for this bitter rivalry game.

The kickoff is set for Noon Eastern Time on FOX this Saturday. The Wolverines are currently favored by 4.5 points at most online sportsbooks and the total is hovering between 49.5 and 50.5 points.

Interestingly enough, this line initially opened at Michigan -2.5 before lots of sharp money pushed it out to its current number of Michigan -4.5. Here is a live look at the best available odds via our college football odds comparison tool.

What to Expect from the Michigan Offense in Week 9

Wolverines coach Jim Harbaugh has gone back to a more run-first offense and it has paid off handsomely so far this year. Michigan’s offense ranks 4th in the country with over 253 rushing yards per game. They also rank 14th in yards per carry.

The Wolverines are blessed with one of the best running back duos in the land with Hasaan Haskins and Black Corum. Both backs have scored 10 rushing touchdowns apiece already this season. These two dynamic backs are a big reason why Michigan is converting 47% of their third downs (18th in the country).

Junior QB Cade McNamara has done a decent job for this offense by racking up 1,115 passing yards and 5 TDs. Those aren’t mind-boggling stats but keep in mind that Michigan only throws the ball 23.7 times per game (117th in the nation). McNamara’s favorite target has been Cornelius Johnson, who has 17 catches for 312 yards and 3 TDs.

What to Expect from the Michigan State Defense in Week 9

The Spartans defense has done a bang-up job all year long of slowing down offenses. Michigan State only allows 3.2 yards per rush and only 6.3 yards per pass. This shows that they don’t have any glaring weaknesses on the defensive side of the ball.

Michigan State’s leader on defense is edge rusher Jacub Panasiuk, who leads the team in both sacks (5.5) and tackles for loss (8.5). The Michigan offensive line has done a fantastic job of protecting McNamara this year but they’ll need to keep an eye on what side Panasiuk lines up on. The Spartans secondary has picked off six passes, one of which Cal Halady took back for a touchdown.

What to Expect from the Michigan State Offense in Week 9

Michigan State’s offense has played much better than many people expected, mainly thanks to the maturity of Payton Thorne, who has thrown for 1701 yards and 15 TDs. The 6-2 sophomore makes smart throws and is the main reason why this offense averages 8.8 yards per pass.

The Spartans’ running game isn’t quite as dominant as the Wolverines’ but it’s still pretty impressive. RB Kenneth Walker III has racked up 997 yards and 9 TDs so far this year. The 5-10 junior may even have a slight chance at the Heisman or at least an invitation to the ceremony.

One concern for this Spartan offense is their lack of success on third down. They rank 98th in the nation in third-down conversions (35.14%), which may hurt them greatly in this contest.

What to Expect from the Michigan Defense in Week 9

The Wolverines’ defense is one of the best in the country, as they only allow 14.3 points per game (2nd only to Georgia). This unit does a terrific job of stuffing the run, as they only give up 3.5 yards per carry. They are also skilled at getting off the field on third down.

Michigan’s best pass rushers are Aidan Hutchinson and David Ojabo. Both have registered five sacks so far this year and they may be able to make Thorne uncomfortable in this game. The Spartans only rank 51st in QB sack percentage so the Wolverines may try to call more blitzes than they normally do.

Daxton Hill leads the secondary with 2 INTs while Josh Ross leads the team with 44 tackles. This unit does a fine job against this pass, as they rank 14th in yards per pass allowed and 15th in passing yards per game allowed.

We love taking the First Half Under in marquee games since both teams are usually a little bit tight in the early going. Both of these teams have a solid defense as they both rank inside the Top 20 in yards per play allowed.

While both teams are excellent at running the ball, both are also good at stopping the run. This means that there shouldn’t be any huge running plays, especially in the first half. Both teams are somewhat mediocre in the passing game, as both rank outside the Top 50 in passing yards per game.

We see this game as a somewhat low-scoring affair, with both defenses dominating the first half. We prefer the First Half Under instead of the full game Under because we get to avoid any overtime scoring binges. Let’s cheer for an old-school slugfest in this one! Good luck!