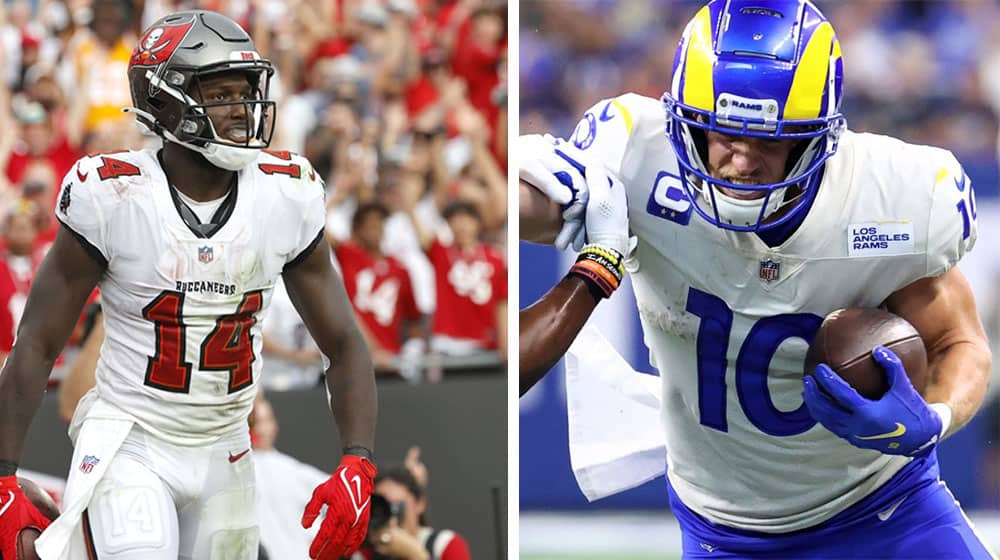 Our Best Bets for Buccaneers at Rams

In what is shaping up to be the marquee matchup of the Sunday slate, the LA Rams will host the Tampa Bay Buccaneers at SoFi Stadium. Both of these teams are off to hot starts at 2-0, led by the offenses. Tampa is the NFL's top-scoring team through two weeks and the Rams are the NFL's fifth highest-scoring team through Stafford's first two starts.

We will break down the matchup and share our guide to betting the current odds in this article.

Best Spreads and Total for Buccaneers at Rams

As for the total, the game opened at 52 points, has been as high as 56, but currently sits at 55.5. It is hard not to love the total in this one. The Rams will not be able to run the ball on this Bucs defense, but as we saw in the game against the Cowboys, Tampa's secondary looks very beatable at the moment.

Don't just bet the odds your go-to sportsbook gives you! Shop for the best line and/or lowest juice, before making any wager. The spreads and totals shown below are the best odds available at the moment. You can shop live odds from every sportsbook in your state by using the dropdown menu on our free odds tool.

All eyes will be on the Rams and the Buccaneers in Week 3 when the two 2-0 teams go head-to-head in a game that could easily end up being the decider when it comes to the NFC’s final seedings. Last season the Rams came away with a 27-24 victory thanks to Jared Goff’s monster game, but if anything, the Buccaneers look like a more polished squad this year than they did last season.

Tampa’s receiving trio of Godwin – Evans, and Brown has been stellar through two weeks and Rob Gronkowski has turned back the clock with back-to-back two-touchdown outings. Tom Brady has nine touchdowns through two weeks and the Bruce Arians-led Buccaneers look like an extremely difficult out with the high number of top-end offensive pieces they can scheme around.

What to Expect from the Bucs in Week 3

In last Sunday's beatdown against Atlanta, Brady targeted ten different receivers and had a successful pass attempt to each of his targets. Not many rosters have the capabilities to build such a diverse offense.

The Tampa run game headlined by Leonard Fournette and Ronald Jones also grades very well through two weeks. Creating plays on the ground and stopping the run efficiently could be the keys in Sunday’s matchup against a Rams squad that allowed a whopping 4.7 yards per carry in two weeks.

Tampa Bay’s run offense complements their passing attack nicely, but the real strength of this Buccos team lies in stopping the run.

This could come extremely handy against a Rams offense that has struggled to create meaningful offense on the ground averaging only 3.4 yards per carry despite facing easy matchups in the first two weeks of the young season.

What to Expect from the Rams in Week 3

If you look at the offensive stats of LA, you will be amazed by the dominance they showed when it comes to their passing game. Through two weeks Matthew Stafford has completed 70% of his passes with a 10.7-yard average depth of target. The Rams receivers reached 15.4 yards per reception reaching first downs at 72% of the time.

LA’s three-headed monster of Kupp, Woods, and Van Jefferson seems similarly explosive to Tampa’s offensive weapons. Through two weeks, Cooper Kupp is easily the offensive player of the year. Kupp has played 108 of 111 total snaps for the Rams, ran 59 routes on 59 Stafford dropbacks, and has a 37.5% target share (21) targets to go with his three touchdowns.

While the Rams WR core is impressive, we are still favoring Tampa Bay big time going into the Week 3 matchup between the two. This Rams team is extremely top-heavy and the backup personnel is league average at best.

LA’s two tight ends have seen a combined one target in Week 2 and the run game was single-handedly going through Darrell Henderson, who got injured in last Sunday’s game against the Colts.

LA simply does not have the backup personnel to either create offense on the ground or to stop the run and these problems could cost them the game facing a Tampa Bay team that does everything very well and has depth at every position.

We are taking Tampa Bay on the money line in Week 3. This game is basically a pick’em and it shouldn’t be lined like this. The Buccaneers are fully healthy, have at least a handful of top-end players at each position and the Rams really don’t have anything going for them besides a quality WR core and Matthew Stafford slinging deep passes.

This will also be the first real defense LA is facing this year. Our model Makes Tampa Bay a two-point favorite on the road and we are taking the value with Tom Brady!