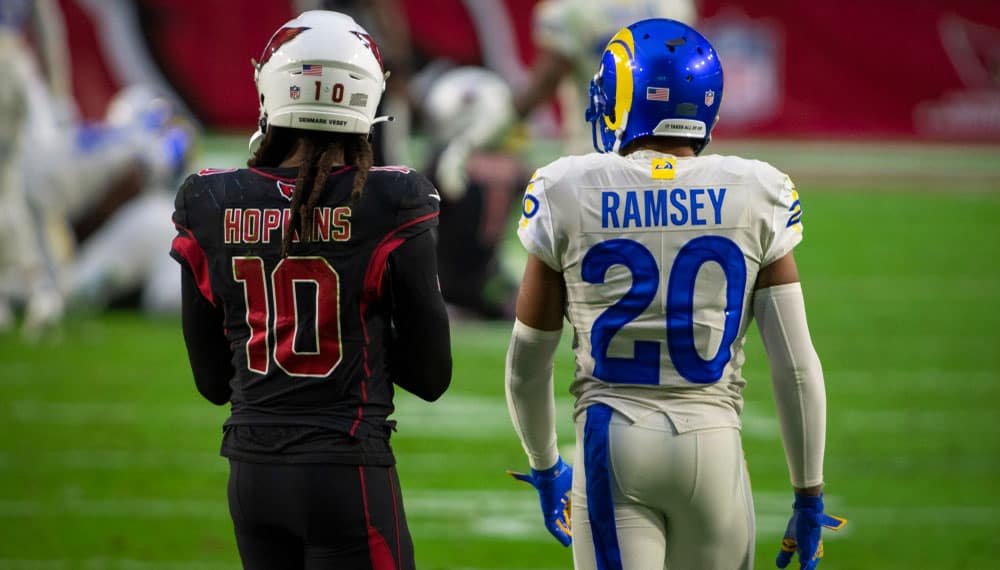 Our Best Bet for Cardinals at Rams - NFL Week 4

We have a tricky matchup on our hands in the highly anticipated Sunday night NFC West clash between the Cardinals and the Rams. Both teams are coming into the game with a perfect 3-0 record and the Rams are laying between 4 and 5 points at home across the board in a game that should be relatively closely contested.

The offseason lookahead line for this matchup was Rams –4, so we’ve seen a small move towards LA after three weeks, but the spread is not crossing any key numbers. The Rams' win and cover against the Bucs in Week 3 is easily the best win amongst these two teams, but does that set them up for a letdown this week? In this article, we will break down what we expect from both teams and our pick for the best bet for this matchup.

New PointsBet players that register using the promo code BVFBMULTI1 will receive $200 free with any $20 NFL Week 4 bet. Just follow these steps to lock in your $200 bonus:

Current Odds and Numbers to Target for Each Bet

What to Watch for From the Rams in Week 4

The Rams are flying high after freshly defeating the defending champion Tampa Bay Buccaneers. The story of the matchup was the Rams’ offensive line keeping QB Matt Stafford in a clean pocket through the entire game. Stafford was only pressured on 18.4% of his dropbacks and averaged an average depth of target of 9 yards. The chemistry between Stafford and WR DeSean Jackson was amazing, as Jackson was consistently getting open and Stafford was peppering him with deep passes.

The Rams WR core was once again headlined by Cooper Kupp, who ran a total of 35 routes and had 9 receptions on 12 targets. Kupp was more of a force in the short passing game, but his workload is still the highest in the league and we don’t see that changing anytime soon.

Speaking off Matthew Stafford, he is enjoying his Rams-tenure and the perks that come playing behind a much-improved offensive line compared to the one he had in Detroit. Stafford has an average depth of target of 10 yards through three games (3 more than what Jared Goff averaged with this Rams squad last year) and he has reached first downs on 47% of his successful passes (Goff averaged 35% in his 2020 season). The Rams receivers are also averaging a whopping 14.3 yards per successful reception, making LA the most high-powered offense three weeks in.

We could see Sean McVay changing a few things going into Week 4, given that Arizona’s pass defense has been nothing short of stellar allowing only 10.3 yards per reception and a 6.7-yard average depth of target.

We would like to see more of a focus on the run game, as the Rams have only averaged 3.3 yards per carry so far this year, a full yard less than their 2020 average. This is important going into this game as the run is how you beat Arizona. The Cardinals were among the worst run defenses in 2020 with 4.6 yards allowed per carry, and things didn’t get too much better in the news season with the team allowing 5.4 yards per carry in three games so far.

What to Watch for From the Cardinals in Week 4

Arizona’s offense is largely reliant on Kyler Murray. Murray has been stellar through the first two weeks of the season, but in Week 3, he didn’t have any touchdown passes and also threw an interception. His 88.2% adjusted completion rate is still very impressive, but what was enough to get by the Jaguars, might not be enough against the division rival operating with a deep passing game.

We have been impressed with the Arizona skill player group so far with all of RB James Conner and the WR duo of Christian Krik, and A.J. Green delivering high grades across the board. DeAndre Hopkins played through an injury in Week 3 and we would want him ideally close to 100% in this Week 4 matchup.

Give us the points and the Cardinals! This should be a close game between two divisional foes that boast high-powered passing offenses. Both passing defenses have been stellar and we have doubts that Sean McVay will lean more on the run game in Week 4. Our model makes this spread closer to 4 points, so getting anything around 6 presents some line value. Good luck!