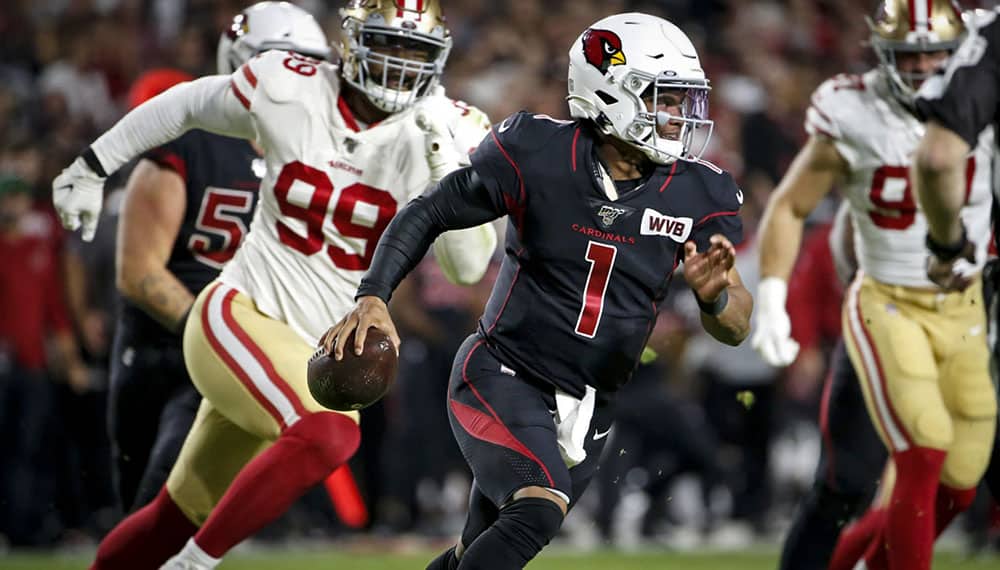 Our Best Bet for 49ers at Cardinals - Can Arizona Make it 5 Straight?

In what should be one of the more intriguing NFL Week 5 matchups, the 2-2 San Francisco 49ers travel to Arizona to take on the 4-0 Cardinals. There is a ton to cover in this one, with no shortage of storylines. Here are just a handful of bullet points to mention right off the start:

Talk about some contradicting trends there. One trend that seems to plague the 49ers every season is injuries. If the players currently on the 49ers' injury report formed their own team, they would make the playoffs. That being said, after seeing this spread fly away from the 49ers early in the week, nearly all of the smart money on this game is on the 49ers.

Can San Francisco go into Arizona and upset the undefeated Cardinals? In this article, we will break down what we expect to see, what the current odds are for this matchup, and our pick for best bet.

Line Movement and a Live Look at the Best Available Odds

Unlike the Denver/Pittsburgh week 5 matchup, this line has been all over the place this week. The look-ahead number was Arizona (-2.5), it opened at Arizona (-4), got bet all the way to Arizona (-6) before 49ers money started coming in moving it back to Arizona (-4) at most books.

After opening at 53.5, the under has been a popular bet, moving the number all the way down to 49. Even at 49, the under is 7-3 in the last 10 matchups between these teams. That being said, Arizona has gone over 49 every game this season, albeit against some of the weakest defenses in the league.

What to Expect from the Cardinals in Week 5

After four weeks of action, there is only one unbeaten team left in the league and we are willing to bet that there is a solid chance that they won’t stay undefeated after this week 5 matchup. The Arizona Cardinals are a perfect 4-0, but it is easy to see why this record is extremely fraudulent if you have followed the team’s path heading into this Week 5 NFC West divisional matchup.

Arizona faced a Titans team in Week 1 that has been always projected for a lot of regression coming into the season. Tennessee has peaked on every front through the last two seasons and the only way for them is downwards. After beating the Titans, Arizona faced a Minnesota team that is close to league average, and they only won due to a missed field goal by the Vikings in overtime.

The Cardinals were also down two scores against the Jacksonville Jaguars in Week 3, a team that our model projects more than 7 points worse than league average. It is also important to note that Kyler Murray had zero touchdown passes against Jacksonville.

During last Sunday’s win over the Rams, the Cardinals got helped by two turnovers, a questionable call taking away 6 points from LA, and despite this, the Rams still outgained Arizona on a yards per play basis. This team is simply not as good as the market believes it is.

If you look at the line movement for this game, it tells you a whole lot about how high the market is on Arizona after the first four weeks. The preseason look-ahead line here made San Francisco two-point favorites on the road. Heading into last week, the Cardinals flipped to a two-point favorite. Now we are looking at the home team laying close to six points. That is an eight-point correction towards Arizona.

What to Expect from the 49ers in Week 5

The 49ers do have injuries on both sides of the ball and – most importantly – the status of Jimmy Garoppolo is up in the air. Early signs have been positive and injury experts think that the QB only suffered a calf contusion and not a strain or a tear. Jimmy G will be officially re-evaluated on Wednesday, but we would expect him to practice on Friday and make this start on Sunday.

Even if it is Trey Lance making the start, we would take the 49ers as the rookie was serviceable last week hitting 9 of 18 passes for 157 yards and two touchdowns with another 41 yards on the ground. The way the 49ers are built, they are never asking too much of their quarterback and we believe that Lance’s current skill level is perfectly enough to produce against Arizona.

The way to beat Arizona is on the ground. Arizona has a decent pass coverage unit, but the Cardinals are suffering against the run, allowing 5.4 yards per carry, the highest in the entire league tied with KC. With Trey Sermon looking solid as San Francisco’s primary RB, we have no doubt that the 49ers will be able to produce offensively this coming Sunday. Serman has had back-to-back games as the lead RB for SF and is coming off an 89-yard game where he had 19 carries. Sermon picked up 50 of his total yards after contact, we have high hopes for him going forward.

Give us San Francisco against the spread! The 49ers are still a Super Bowl contender, and this is not something we could say about Arizona, a team that was helped by an easy schedule and most importantly luck in the early going. The Cardinals laying more than a field goal here is the result of market overreaction.

Make sure to way for the San Francisco QB update. If Jimmy G is announced out, this spread could easily reach 6 – 6.5 points giving you an even better deal backing the road dog!