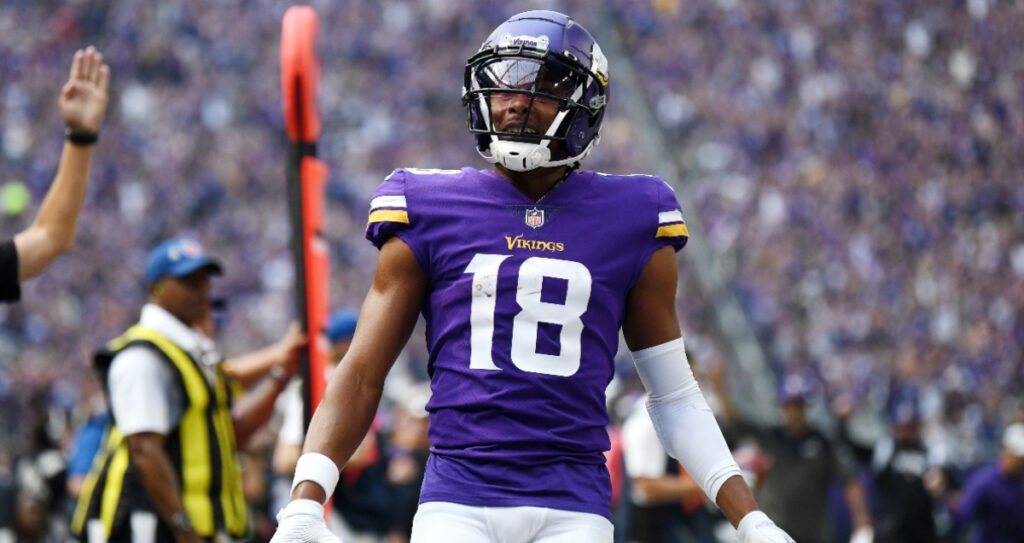 We're playing Justin Jefferson to stay Under his receiving yardage total against the Patriots on Thanksgiving Day.

Thanksgiving conjures images of family, food, and of course, football. For sports bettors, this is one of the best days of the year. The 2022 slate brings us two early games with larger favorites and a nightcap with a close point spread to finish off the day as you eat your second helping of pumpkin pie.

Buffalo and Dallas are both 9.5-point favorites Thursday with the Bills visiting Ford Field for the second time in five days to play Detroit and the Cowboys playing holiday hosts to the New York Giants. The primetime game features the Minnesota Vikings welcoming the New England Patriots to town. Minnesota is a 2.5-point home favorite in that matchup.

Week 11’s TNF prop bets finished 1-2 for the second straight week in Tennessee’s decisive road win at Lambeau Field. Ryan Tannehill and Robert Woods both outperformed their yardage totals to sink our two bets fading the Titans, but Aaron Jones stayed well under his rushing yard total to cash our final play of the night.

Goff has been pretty effective at not turning the ball over for the last month, throwing just one interception in 115 pass attempts. In the seven games prior to that stretch, he tossed seven picks.

The team has been running the ball well in recent weeks, but Buffalo’s strength defensively is stopping the run. They also score more than 28 points per game and will likely force Goff to play from behind and have to throw more often, especially in the second half.

Buffalo’s defense is tied for the league lead in interception rate and will be on the receiving end of at least one of Goff’s throws on Thursday afternoon.

Jones just threw for a season-high 341 yards against Detroit last week, his most in a game since Week 16 of his rookie season in 2019. Those Lions rank dead last in the NFL in opponent scoring average.

Dallas ranks first, and just held Kirk Cousins and the Vikings to three points and 105 passing yards in Week 11.
The Cowboys pressure opposing QBs on 30.2% of their dropbacks, the best rate in the NFL.

Dallas leads the league in sacks (4.2/game) and passing yardage allowed (174 yards/game) and will prove to be too much for Daniel Jones to overcome through the air.

This play doesn’t feel great to write because fading Jefferson this season has been a losing strategy. He’s gone over 95 receiving yards in seven of his 10 games this season and totaled more than 145 yards four times in 2022.

Before Week 11, Jefferson had a string of six games in a row with 8+ targets, 6+ catches, and 95+ receiving yards. He was stifled by a Cowboys defense that pressured Kirk Cousins and saw only five targets, his fewest all season. The Patriots are not as strong with their pass rush as Dallas, but their secondary is their strength.

Bill Belichick is famous for taking away the main weapon in opposing teams’ offenses, and Jefferson is that guy for Minnesota. We predict a second straight week of underperformance for the second-leading receiver in the league on Thanksgiving night.