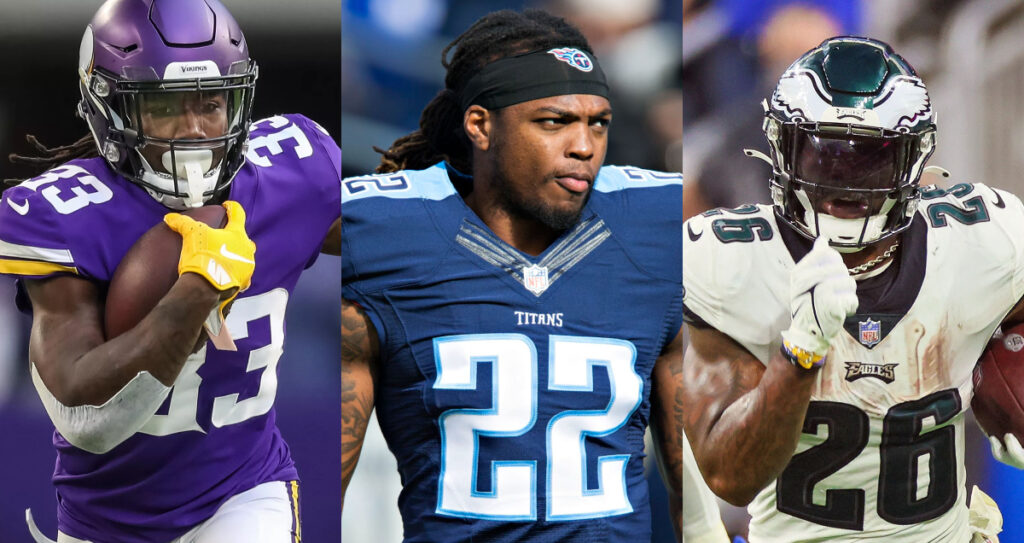 Week 2 of the NFL season has been jam-packed with excitement so far. The Jets, Cardinals, and Dolphins all pulled off miracle wins. The Jags shut out the Colts and the Cowboys upset the Bengals with a backup QB.

The week concludes with a pair of intriguing games on Monday. The Titans hit the highway to face the Bills and the Vikings take on the Eagles in the City of Brotherly Love.

Our player prop bets continued to be red hot yesterday, as we swept the board with a 4-0 performance. That brings our props column to 9-1 on the young season. We'll look to keep it rolling with our 3 best player prop bets for Monday Night Football's doubleheader.

We love Derrick Henry but we're not so sure about his health after last year's foot injury. He didn't seem to hit the holes quite as fast against the Giants in Week 1, even though he finished with 82 yards on 21 carries. Even though the former Heisman Trophy winner gashed the Bills for 143 yards last season, we think he has a rather quiet game tonight in Buffalo.

Our projection has Henry topping out at around 75 yards or so in tonight's game. The main reason why we like the Under has to do with game script. Tennessee is a 10-point underdog against Buffalo, so they may have to throw the ball more than they are used to just to keep up.

If the game goes the way the oddsmakers see it, Henry may not get enough carries to get over this yardage total. Henry's career numbers against the Bills also favor the Under, as he's averaged 83.5 rushing yards in four games against Buffalo. He has also gone Under this total in 58 of his 87 career games.

As for the later game, we like Dalvin Cook to have a big game against the Eagles tonight. Philly gave up 181 rushing yards to Detroit in Week 1 and we think they could have a tough time containing Cook. The former Florida State standout rushed for 90 yards on 20 carries against the Packers last week.

Most of the Eagles' defensive focus will be on slowing down Justin Jefferson and the Vikings' passing game. That should open up plenty of holes for Cook to exploit the defense. We'll roll with the Over!

Cook isn't the only running back that we think will shine on Monday Night Football. Miles Sanders should be able to find some success as well. We have Philly's offensive line rated as the best in the league, so Sanders is poised for a huge season.

Sanders sliced through Detroit's defense last week for 96 yards on only 13 carries (7.4 YPC). He may be able to do the same against a Vikings defense that ranked 31st last year in yards per carry allowed (4.7). Minnesota's defensive line got some nice pieces in the offseason but it may take them some time to gel as a unit.

Our only concern with this pick is that Sanders will split carries with Boston Scott and Kenneth Gainwell. Nevertheless, Sanders should get most of the action as long as he holds on to the football. He's averaged 61.8 rushing yards per game in his career so we'll jump on the Over!

Best of luck with all of your Monday Night Football action! Let's make it a 2-1 night or better!