Oregon vs Georgia - Betting Preview and Our Best Bet Pick 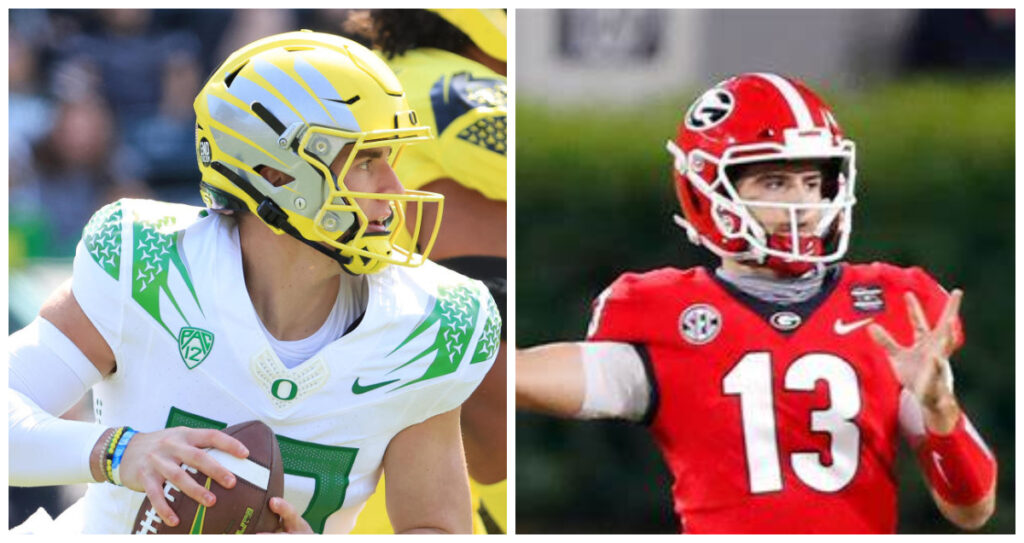 But at EatWatchBet, there is another and perhaps more important storyline brewing - literally - we are carefully monitoring. That storyline is Duck Duck Dog.

Duck Duck Dog is a limited-release beer crafted by a pair of Bulldog alums for this game. StillFire Brewing, located 30 miles north of Atlanta, paired up with Ninkasi Brewing out of Oregon to create this American Pale Ale. Using Georgia Red Wheat mixed with Oregon Strata Hops, this craft brew promises to “unify those who prefer to bark or quack!”

Now, Oregon and Georgia fans still will have plenty to celebrate no matter which team claims victory at this neutral-site game.

What to Expect from the Oregon Offense vs Georgia

New Oregon Offensive Coordinator Kenny Dillingham was at Auburn for Bo Nix’s freshman year, the QB’s best season at the SEC school. Nix threw for more than 2,500 yards and 16 TDs in his freshman year, and Dillingham’s task is to replicate or improve on those benchmark numbers for the Ducks. To do that, Nix will have the benefit of playing behind an offensive line returning every starter from 2021.

A mix of youth and transfers make up the skilled positions for the Ducks. Receivers Chase Cota (UCLA) and Caleb Chapman (Texas A&M) will compete for playing time with talented sophomores Troy Franklin, Seven McGee, and Donte Thornton. Handling the rushing attack will be transfers Noah Whittington (WKU) and Mar’Keise Irving (Minnesota), a pair of agile and versatile backs with explosive speed.

What to Expect from the Georgia Defense vs Oregon

What happens when your school loses eight defensive players to the NFL draft in a single year? If you’re Georgia, you take the next NFL-caliber player off the bench and give them a chance to shine. The same was true for the coaching staff as the Bulldogs replaced Lanning with in-house elevations of Will Muschamp and Glenn Schumann to co-defensive coordinator.

Expect potential No. 1 draft pick, Jalen Carter, to anchor the defensive line as he impressed during last year’s title run. He’ll be joined by veteran DE Tramel Walthour up front.

The linebackers also have returners from the 2021 team as Nolan Smith and Robert Beal Jr created chaos down the stretch for Georgia last year. Kelee Ringo and Chris Smith round out the returning backfield for the defense, giving the Bulldogs both depth and experience at the corner and safety positions in 2022.

What to Expect from the Georgia Offense vs Oregon

Returning for his 6th year will be QB Stetson Bennett. Although he faced criticism in 2021, Bennett impressed in the Bulldogs' playoff run, completing 66% of his passes for 537 yards and 5 TDs. The battle to be his backup should be interesting as JT Daniels is off to West Virginia, leaving highly-ranked recruits Carson Beck, Brock Vandagriff, and Gunner Stockton to battle for the No. 2 position.

Other than the team’s leading receiver in TE Brock Bowers, the Bulldog offense will have a completely new look in 2022. Ladd McConkey and Adonai Mitchell are the only wide receivers to return with significant experience as the combo combined for 60 catches last year.

Meanwhile, last season’s reserves Kenny McIntosh and Kendall Milton will compete for carries out of the backfield. These two will be running behind an offensive line that lost two starters to the NFL draft, but the replacements are NFL-caliber and have some experience after filling in last season.

What to Expect from the Oregon Defense vs Georgia

Despite losing Kayvon Thibodeaux to the NFL draft, Oregon returns a solid group of defensive linemen to start the 2022 season. Brandon Dorlus, Popo Aumavae, and Keyon Ware-Hudson were terrific last season and sat out much of the spring to recover from injuries.

Behind these talented players is Noah Sewell, a two-time team leader in tackles. Justin Flowe adds another five-star recruit to the linebacker corps, giving the Ducks a load of potential future professionals to work with up front.

The backfield for the Ducks, however, is a weakness entering the season. Colorado transfer Christian Gonzalez will immediately see the field for Oregon, giving his new team a veteran presence at cornerback.

Safety Bennett Williams was a difference maker before ending his 2021 season early due to a knee injury. If Williams returns to form, the Ducks will have two valuable pieces to shore up these positions.

Dan Lanning will be the third coach who has worked under Kirby Smart to face him on the opposing sidelines. Thus far, Arkansas’s Sam Pittman and South Carolina’s Shane Beamer have fared poorly in these match-ups, losing by a combined 91 points. None of these games were close before halftime.

In a matchup of Top 15 teams, rarely would agreeing with oddsmakers on a three-score spread be wise, especially when Oregon has plenty of talent and a knack for pulling off an upset like this. In 2021, the Ducks traveled to Ohio State and stunned the home team in an early-season match-up.

Still, Georgia is the defending national champions, and they reload instead of rebuild at this point. Look for the Bulldogs to steadily run the Ducks out of Atlanta with a dominant victory.