Oilers at Avalanche: Best Bets and Prop Bets for Game 2 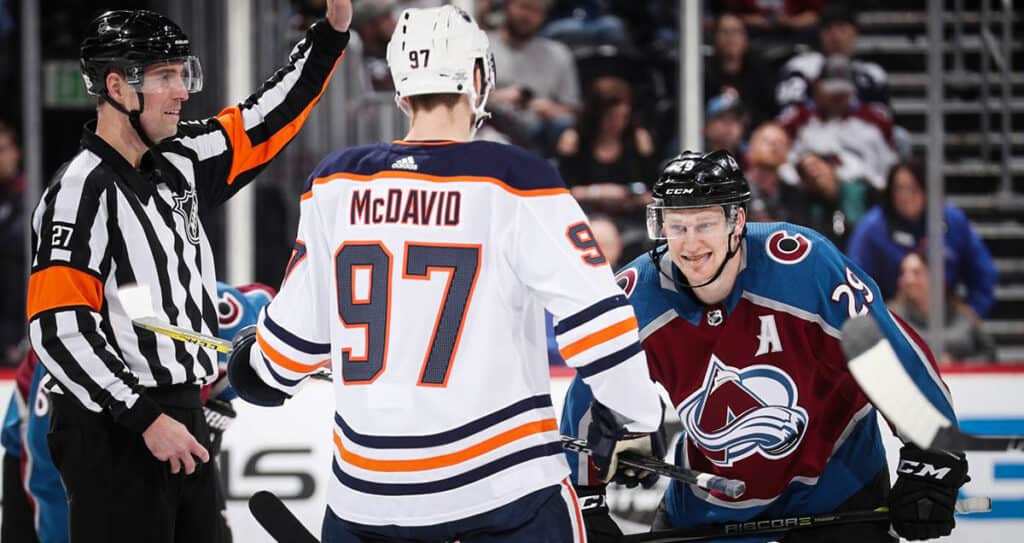 McDavid and MacKinnon both make our best bets for game 2 of the WCF.
By Bill Christy on June 2, 2022

As we head into Game 2 of this best of 7 series that will decide the representative of the Western Conference in the Stanley Cup Finals, we need to take a look at Game 1. If you had the over in Game 1, you were sitting pretty early in the 2nd period.

The same could have been said for Avs backers when they got out to the 7-3 lead late in the 2nd. However, Connor McDavid sparked a 3-goal rally that got things tight midway through the 3rd. Gabriel Landeskog put an end to it when he scored on the empty net and dash Oiler fans hopes.

The Oilers have the top 2-point scorers in the playoffs. McDavid has 29 and Draisaitl is just 1 behind at 28. On top of that, Evander Kane leads all with 13 goals this postseason. For the Avs, Darcy Kuemper has been solid in net with a 2.65GAA.

However, Kuemper is questionable after leaving Game 1 early with an upper body injury. If he is unable to go, Pavel Francouz will be between the pipes and after giving up 3 later goals, he could be a bit rattled headed into Game 2.

Colorado has not lost to Edmonton at home since 2018. On the season, the Avs went 36-6-5 at home while the Oilers were 25-18-5 on the road. We are playing the 60 minute line here to reduce the juice, but are still confident the Avs get the job done in regulation.

Best Prop Bets for Game 2 of the Western Conference Finals

This Western Conference Final is loaded with star power and the player props available for tonight's game 2 show just that. Draisaitl, McDavid, MacKinnon, and Rantanen all have anytime scorer props priced at even money, and another 6 players are priced between +130 and +190.

There are plenty of props on the board tonight, but these three stand out as our best bets for game 2:

Nathan MacKinnon UNDER 4.5 Shots on Goal

MacKinnon leads all players this post season with 59 shots on goal. Through 11 games, that puts him at 5.3 shots on goal per game. However, he has failed to get over 4 shots on net over the last 2 games. In a game that featured 47 shots by his team, he only accounted for 4 of them. We don’t expect him to eclipse the 4-shot mark again in this one. At the moment, bettors can get this at plus-money at DraftKings and BetRivers.

McDavid leads everyone in the playoffs with 29 points thus far. He has gone over the 1.5-point total in 8 of his last 10 games, including a 3-point effort in Game 1. He is a threat to score but more so create for his teammates at any time on the ice. With Kuemper possibly sitting this one out or playing injured, McDavid should be able to pick us up 2 points in the least.

Last game was extremely high scoring and this game could very well head in the same direction. However, we believe both teams will be a bit tightened up at the start of this one. Our value radar is off the charts on this one and we could not help ourselves. Tread lightly here but it is certainly worth a sprinkle.