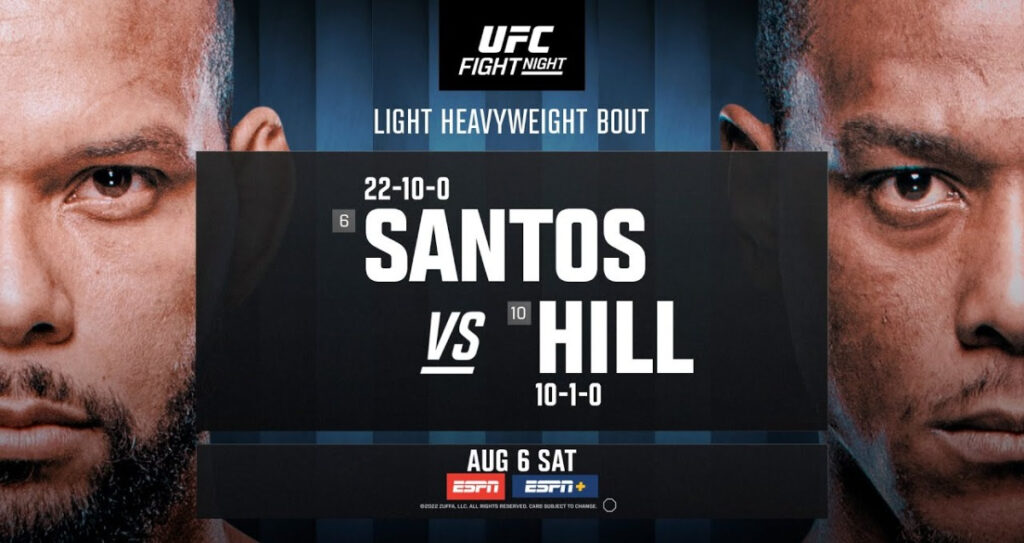 We like Santos vs Hill to go over 3.5 rounds as one of our best bets for UFC Fight Night.
By Bill Christy on August 4, 2022

A 2-2 night for UFC 277 was not too shabby considering we still got to see some great finishes and fights. Nicolae Negumereanu finished Ihor Potieria with a series of punishing knees that elevated him to 13-1. Michael Morales closed the front end of our parlay with a KO win early in the 3rd round.

Respect to Drew Dober, who I was not high on, for finishing Rafael Alves in the 3rd by KO. He basically called out Paddy after the fight which would be an intriguing matchup but not sure it would get booked. Magomed Ankalaev dismantled Anthony Smith to prove once again that he is on another level.

The submission victory by Alexandre Pantoja by a neck crank sent him on top of the octagon cage to celebrate and we were right there with him as that closed our other end of the parlay. Sergei Pavlovich hit our other bet for us by ending things within the first minute against Derrick Lewis by using an onslaught of heavy strikes.

In the co-main event, Brandon Moreno finished Kai Kara-France in what was the most entertaining fight in my opinion. It will remain to be seen if Moreno meets up with Figueiredo again for a 4th fight with the belt on the line once again.

In the final fight, Amanda Nunes looked to be her old self and took the fight extremely seriously to pick up an absolutely commanding unanimous decision. This weekend we have a handful of fights that look to be entertaining on paper, but we shall see how they play out. However, as always, we have a few plays that we like for Saturday.

Serghei Spivak has gone 4-1 over his last 5 fights, dating back to July of 2020. His lone loss came to Tom Aspinall, who in my opinion is a top 3-5 Heavyweight when healthy. Prior to that bout, he handled Aleksei Oleinik and most recently he knocked out the overrated Greg Hardy in March.

Spivak is facing Augusto Sakai, who is on a 3-fight losing streak. And not only were they losses, but all came via KO/TKO. He has yet to fight in 2022 and this matchup will likely not serve him well.

Serghei can strike but is also a Sambo master and will likely get Sakai and do his work on the ground. We see this one being stopped early but the parlay will ensure any finish will pay.

Vicente Luque is coming off a loss by decision to the surging Belal Muhammad. In that fight, Belal used some extremely well-timed takedowns to neutralize the power of Luque's feet. Geoff Neal is nowhere near the same as Belal in terms of take-down ability.

Neal would rather stand and strike as that is his main mentality. Luque had wins over Michael Chiesa and Tyrone Woodley prior to Belal. Neal is coming off a win over Santiago Ponzinibbio but had losses to Neil Magny and Stephen Thompson. Neither of those guys are on the same level as Luque and this should be proven Saturday night.

The Vanilla Gorilla returns to the octagon to face Josh Quinlan. Josh has not been in action since he was popped for PEDs after winning his last fight in the DWCS back in September of 2021. He was suspended and fined for his positive test.

Now that Quinlan is off the PEDs, it will be intriguing to see how he handles Jason Witt, who can be tough on the mat. Witt is coming off a KO loss to Phil Rowe and will be looking to take advantage of Quinlan.

We expect Quinlan to have some octagon rust and overexcited nerves due to this being his official UFC debut. Let’s hope the veteran is savvy enough to take advantage of the six-year-younger Quinlan.

Something has to give this Saturday. We believe that Santos is going to try and weather the early storm that Hill will no doubt bring his way in Round 1. If he is able to do that, this one could get dragged out to the full five rounds.

However, the price increase from 2:1 to 3:1 just does not seem worth the risk. We will go over 3.5 here and hope to see a good overall main event.