Odds and Best Bets for UFC 274: Oliveira vs. Gaethje 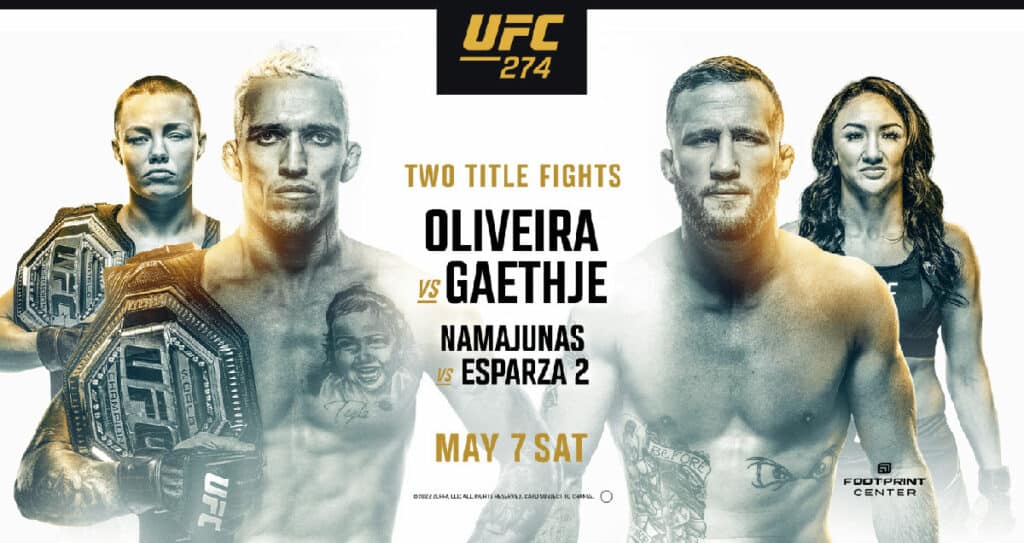 Headlined by Oliveira vs Gaethje, the UFC 274 card is stacked with star power.
By Bill Christy on May 6, 2022

Coming off a card with very little star power in Fight Night Font vs. Vera, UFC fans are treated to yet another loaded PPV card in UFC 274. Taking place at the Footprint Center in Phoenix, there will be 2 title fights and an undercard that has fight of the night potential all over it. Charles Oliveira will defend his Lightweight title against Justin Gaethje, who is coming off an impressive unanimous decision victory over Michael Chandler who is lined up with Tony Ferguson on the undercard. Gaethje had lost to legend Khabib in his fight previous to Chandler via submission and Oliveira will be trying to get a victory in the same fashion as he has 20 of his 32 career victories coming via submission.

Back in 2014, Rose Namajunas tasted defeat for just the 2nd time in her career and the 1st time via submission. Her opponent, Carla Esparaza, the same foe she is facing this Saturday night. After defeating Rose, Esparaza went just 3-4 over her next 7 fight. However, she has put together 5 straight victories, including a KO win over Yan Xiaonan in her last fight. Rose will be out to not only defend her title, but to get back some revenge on Esparaza.

Fiahlo has won 4 of his last 5 fights with all 4 victories coming via KO and in the 1st round. He is a tremendous striker and is matchup with a man making his UFC debut in Cameron VanCamp. A submission artist, VanCamp may be looking to be the 1st to submit Fialho. However, we do not see that happening here, Fiahlo is much stronger and should impose his will on VanCamp. Barring a miracle submission, Fiahlo should make short work of VanCamp here.

Our other end of the parlay is on the swansong of Cowboy Cerrone. I believe we are going to see a more motivated Cowboy in this fight than any of his last three fights. I can’t see him going out a loser in his final UFC fight and believe he will use his superior striking and vast experience to edge Lauzon via decision.

I am a big Michael Chandler fan and believe that he has the goods to get back into title contention. However, I also believe that Ferguson is being way overlooked by the books. Sure, he is 0-3 over his last 3 fights, but look at who he lost to. Gaethje caught him late in the 5th to pick up a KO win, then was beating via decision to the now champ Oliveira, and finally by unanimous decision again Dariush who looks more like a middleweight than a lightweight. I can see Ferguson making this one ugly and getting his hand raised via decision. At 3:1, Ferguson is surely worth the risk.

With such a loaded card, there are no shortage of UFC 274 prop bets to choose from. Here is a look at our favorite fight prop and round prop from Saturday's card:

Williams has won 4 of his last 5 fights with 3 of the 4 coming via KO/TKO. Alex Morono was his 1st victim and it was only the 2nd loss via KO for Morono. He then handed Abdul Razak Alhassan his 1st ever loss via KO and most recently put the finishing touches on Miguel Baeza to give him his 2nd ever KO loss. His opponent, Randy Brown, has his last 2 losses both coming via KOs. Niko Price was followed by Vicente Luque in handing Brown those 2 KO losses. We expect the hard-hitting Williams to be the 3rd to put Brown to sleep.

I expect this one to get into the 3rd round but do not have much faith in it going the full distance. Starting round 4 at +150 could be worth a shot but feel safer with our play of Round 3 more. I hope Gaethje can be elusive enough to avoid the submission attempts early, and if so, we should cash this ticket.

Save 30% with these bundle offers.

UFC 274 is available exclusively through ESPN+. You can bundle this PPV with an annual subscription for $99.98 to get a full year of live sporting events including weekly UFC Fight Night events. Alternatively, the PPV is available at a cost of $74.99 to non-subscribers. In addition to exclusive UFC events, ESPN+ broadcasts every PGA event, NHL game, and a wide variety of college sports.