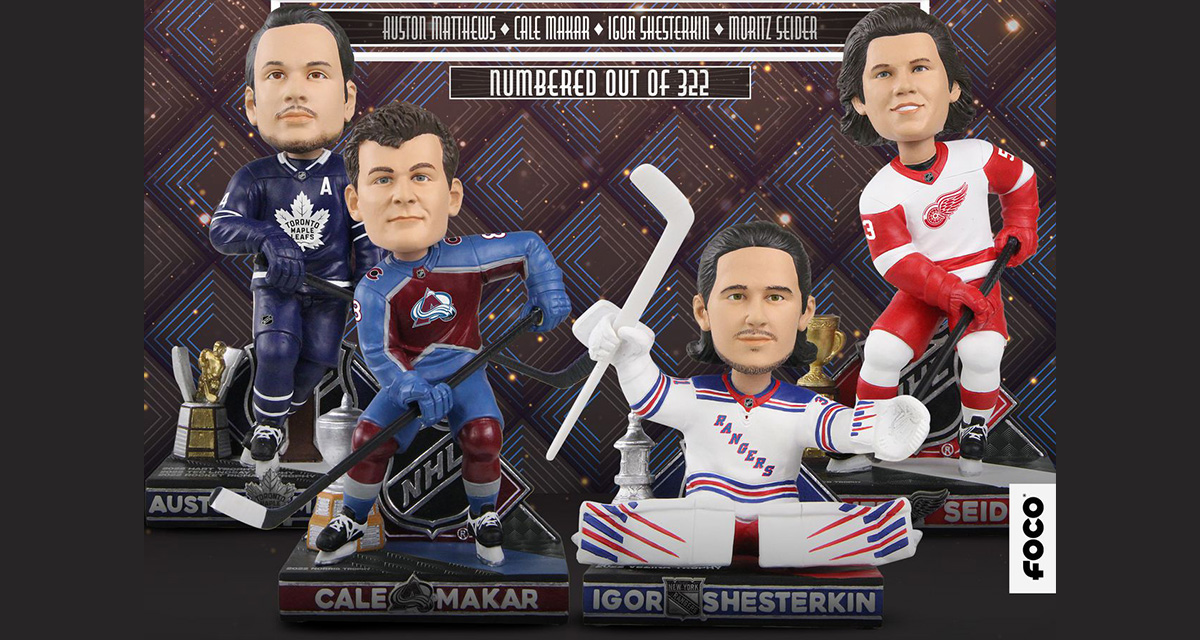 Our Favorite NHL Bobbleheads for the 2022 Season

Hockey is back! That means it is time to ride the wave of every hit, shot, fight, and goal, wishing our favorite team to the promised land. It also means making significant additions to man caves and new hockey collectables.

What better way to do so than with a killer new NHL bobblehead? There are more than a few to choose from, allowing fans of every team to get a unique collectible that will stay in their collection for a long time to come.

The Rangers are one of the bright young teams in the league. Ahead of their rebuild schedule, they went on a run to the Eastern Conference Final last season. With a great young core, featuring dynamic young defenseman Adam Fox, the Blueshirts are sure to return to glory.

You can bring your collection to glory with this awesome one of a kind bobblehead. Fox wears a serious look of concentration on his face, ready to stop a defender or turn the rush the other way and instill his unique brand of offense.

He stands tall with the top of the statue’s head peeking out beneath him, the hand holding the torch sticking out defiantly behind him. It is complete with the New York Rangers logo, showing that this is a Ranger city.

Despite only being around since 1995, the Colorado Avalanche have no shortage of legends in their history. Patrick Roy, Peter Forsberg, Rob Blake, Joe Sakic, and more have all helped bring the Avalanche to Stanley Cup glory.

The latest superstar is center Nathan MacKinnon, pictured here alongside legendary pivot Sakic. The two were known for their skating ability as well as quick, deadly shots that could give any goaltender a handful.

The two skate side by side on this bobblehead, wearing the different styles of maroon and teal that the Avalanche have become known for. Their names surround the swooping “A” on the base of the bobblehead, with the team’s slogan – it’s all about commitment – etched on the boards behind them.

Though the Red Wings are not the dominant force they used to be, there is a lot to like about the direction that the franchise is headed in. One of the major reasons is because of the exciting young defenseman Moritz Seider.

Seider took the league by storm as a rookie in 2022, winning the Calder Memorial Trophy as Rookie of the year. Is going to be a featured part of the Detroit blue line for years to come, bringing his unique mix of scoring and physicality.

On this bobblehead, Seider wears the classic white and red winged wheel jersey. He skates in front of a large NHL logo, with the Calder Trophy sitting to his side. His name, sandwiched around the spoked winged wheel, sits prominently on display at the front of the base.

Fleury has been a mainstay in the NHL for 19 seasons. The former first overall pick made his name with the Pittsburgh Penguins, helping them to three Stanley Cup championships. He has since moved on, now making his home in the State of Hockey.

Fleury hopes to be able to bring the Wild to heights they have never achieved before. And this bobblehead can bring style and flash to your collection. Fleury smiles confidently, rocking the green road uniform and his patented old school design padding.

Fleury stands ready on the base featuring his name in the gold on forest green background, small Wild logos on either side. The unique “Minnesota” font sits under him and the Wild logo stands behind him, though pucks will never get through to him them.

Though Connor McDavid gets all of the press, Leon Draisaitl has carved out a name for himself as one of the best players in the league. A perennial top-5 scorer, Draisaitl brings the substance while McDavid brings the flash.

This bobblehead features the German-born Draisaitl skating confidently in the killer alternate duds. The dark navy is only highlighted by the bright, almost neon orange of the logo, lettering, numbering, and subtle striping.

The base features his name, with the Oiler logo in the middle, in that bright orange. Even cooler, his name stands vertically next to a placard featuring the neon-orange Oiler logo and striping behind him. It is one of the coolest alternate uniforms in the league, an apt mixture of modern and nostalgia.

For Edmonton fans, Draisaitl fans, or hockey fans in general, this is one of the must-have bobbleheads for any collection. It will definitely stand out in a crowd.

There is nothing that says Philadelphia Flyers hockey quite like Gritty and this bobblehead captures that spirit perfectly. The insane, unpredictable mascot is in full force, flying high above the city as a Thanksgiving Day parade float.

The crowd goes wild below, shouting and cheering up at Gritty from the streets below. Flyers logos adorn the entire city as they rally behind the city’s beloved (and often bewildered) hockey mascot. A must for any Broad Street fans.

Any good bobblehead should be a big head, really capturing the spirit of the collectible. As he moves his way further up the all-time goal list, Ovechkin is going to be one of the names that everyone is after.

Ovechkin is in the middle of his powerful stride in this bobblehead, salt and pepper hair and beard showing the signs of a long NHL career. Ovechkin sports the red, white, and blue of the nation’s capital team complete with a base featuring not only his name but the Washington Capitals logo as well. A must-have for not only Caps fans, but fans of history.