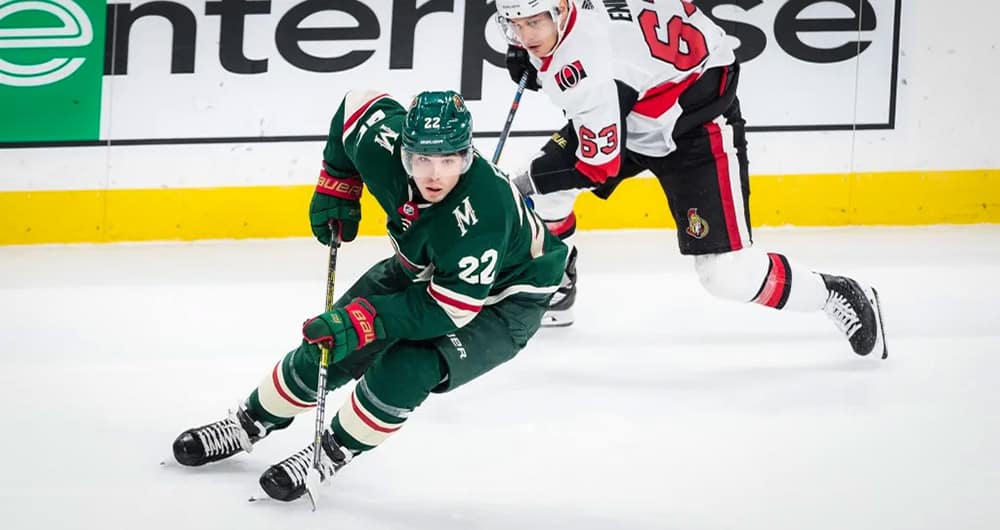 With the NBA off through Thursday for the All-Star break, Tuesday night offers a great chance to find some NHL action on a six-game slate that shouldn't be too intimidating, even for new hockey bettors. In this article, we share the team, parlay, and player prop bets we have already made for Tuesday night's slate of NHL action.

This will be the 2nd meeting between the teams and fans are looking forward to what could be another high scoring affair. The Wild took a 5-4 win back in November at home against these Senators. The Wild jumped to a 3-1 lead after the 1st. The Senators answered with a 3-1 period themselves in the 2nd. They played to a scoreless 3rd and went to overtime. It took Kirill Kaprizov just over 2 minutes to find the back of the net for the game's winner in that one.

The Wild, currently 3rd in the Western Conference standings, have had a funky month this February. After going 8-2 in January, the Wild are just 4-3 in February with 2 of those losses coming to a weak Winnipeg team. Although the Wild are in 3rd, they are only 6 points ahead of the 8th seeded Ducks.

The Senators are coming in off back-to-back losses to Boston and the Rangers. The Rangers loss came at home 2-1. Tim Stuetzle got the game going with a goal to give the Sens a 1-0 lead and less than 2 minutes later the Rangers responded with a Ryan Strome goal. In the 2nd period, Artemi Panarin netted his 14th goal of the season and Igor Shesterkin did the rest. Filip Gustavsson was strong, allowing just 2 goals on 33 shots faced. He will need to be just as sharp or better Tuesday night against a Wild offense that can light the lamp with the best.

This game should resemble the Wild’s last game against Edmonton, where they dominated from start to finish. The Senators are a weak team to begin with and then you add injuries to the equation and you get a team that is at the bottom of the league. I would play this one on the 60min line to lower the juice a bit but nonetheless the Wild take care of business on the road here with ease.

Parlay Bet: Tarasenko OVER 2.5 SOG and Werenski UNDER 0.5 PPP

Tarasenko has gone over 2 SOG in 5 of his last 6 games, including 3 straight games with 3 or more. During that 6-game stretch, he averaged 3.3 SOG per game. Tonight, he faces the Flyers, who are at the bottom of the league in terms of shots allowed per game.

Werenski has just 3 goals and 7 assists on the power play this season. At 4 games played, he is averaging just 0.2 power play points per game. He is facing the Leafs tonight who are 5th in the league, killing off 84.8% of their penalties.

Thanks to sites like Underdog and PrizePicks, player props offer a great way to get into the NHL action whether you live in a legal betting state or not. Here are our two favorite player prop bets from Tuesday night's 6 game NHL slate:

Schenn has scored at least 1 goal in 6 of his last 10 games. Tonight, he faces his old team in the Flyers. He has scored in 2 of his 5 meetings against his former team and at almost 2 ½ to 1 odds, I like the value we get here on a guy that has been one of the hottest scorers over the last couple weeks.

Michael Bunting OVER 2.5 Shots on Goal

Bunting has put up a solid average of shots on goal over his recent 5 games. He is averaging 2.8 shots per game during that stretch. Also, he has reached 3 or more shots in half of those games. He was not active the only other time the Blue Jackets met the Leafs, but with the way he has been peppering goalies and getting him at plus money, the value is there.