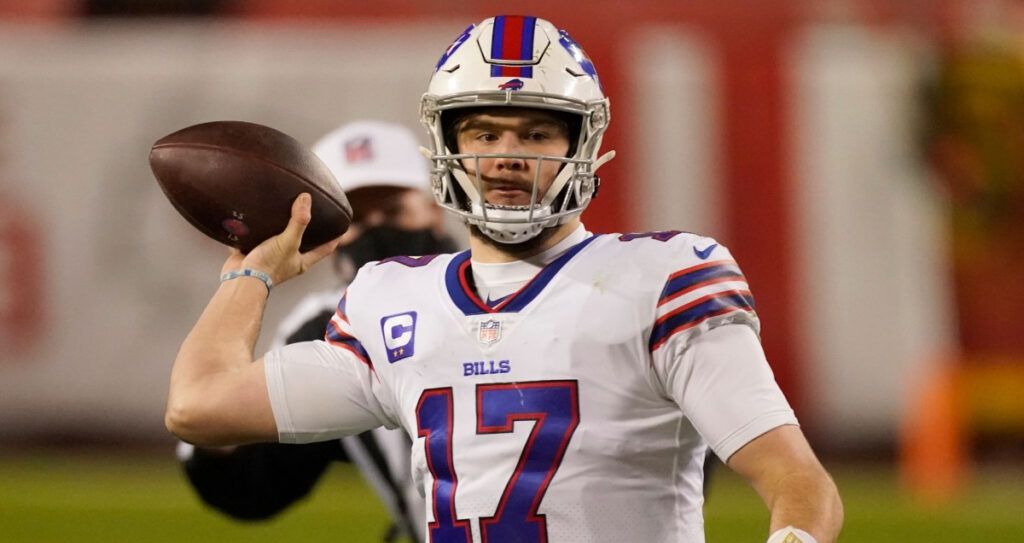 It's a bit juicy, but we like Josh Allen to throw Over 1.5 touchdown passes on Wildcard Sunday against Miami.

The main course of this weekend’s NFL schedule takes place on Sunday and consists of three games beginning with the Miami Dolphins and Buffalo Bills at 1 pm ET in western New York. The day concludes with the third matchup of the season between AFC North rivals Cincinnati and Baltimore, with the Bengals hosting.

To hold fans over in the mid-afternoon slot, we’ll turn to the Minnesota Vikings and the New York Giants from US Bank Stadium in Minneapolis to watch a rematch of their tightly contested Week 16 clash.

What better to pair with a Sunday triple-header during Super Wild Card weekend than a trio of prop plays to make them more interesting? Our best bet from each of those games is presented below.

Allen threw multiple touchdown passes in five of his last six games to end the regular season and accomplished this feat 11 times in 16 games to mark his third straight season with 35+ TD passes.

In the two matchups between Buffalo and Miami earlier this season, Allen threw for a combined six touchdown passes, including four in the Bills’ 32-29 home victory over the Dolphins on December 17.

This number implies a 61.5% probability of Allen throwing multiple touchdowns on Sunday. He accomplished that feat in 68.75% of games this season and has done so in four of six playoff starts during his career.

Allen’s day may be done by the fourth quarter of Buffalo pulls away from Miami, but we project he’ll need to toss at least two touchdowns for that to happen.

One of Jones’ two games with 300+ yards passing happened two weeks ago in the Giants’ 27-24 loss to Minnesota on the road. It was also only the second time this season that Jones attempted more than 40 passes, along with his 341-yard effort against the Lions in mid-November.

His four rushing attempts in Week 17 against the Vikings were tied for his second-fewest all season, though he did manage 8.5 yards per carry in that game.

As far as Minnesota’s defense goes, this matchup is set up for another big day from Jones. The Vikings ranked 31st in total yards allowed in 2022, which marked their third consecutive season finishing 27th or worst in the NFL.

We like Jones to throw for at least 250 yards and tack on 50 rushing yards to comfortably surpass this number in the middle game on Wild Card Sunday.

Evan McPherson OVER 1.5 Field Goals Made

McPherson gained the nickname ‘Money Mac’ for his perfect field goal record in the 2021 playoffs as a rookie and a particularly memorable moment in Cincinnati’s Division round win against Tennessee.

He guaranteed a make before kicking the game-winning 52-yard field goal against the Titans in Nashville and then sent the Bengals to the Super Bowl with a game-winner in overtime of the AFC Championship Game a week later.

McPherson tied Adam Vinatieri’s postseason record with 14 made field goals and did not miss in Cincinnati’s improbable journey to the Super Bowl.

Fast forward to 2022, and McPherson was 28th in field goal percentage while making just under 83% of his tries. What we find promising is that he’s attempted multiple field goals in six of the Bengals’ last seven games and missed just once during that stretch.

We expect Cincinnati to be in Baltimore territory for a good portion of this game and that ‘Money Mac’ will cash in on at least two of his attempts on home turf.

For our bonus bet, we have to throw an Under into the mix. Though James has done well of late, he still only averaged 3.4 receptions per game this season. That figure alone tells us that this number is probably a tad too high.

While we aren't huge fans of this Vikings secondary, James is only averaging 4 receptions per game in his career against them. We're thinking that Jones will look to target Daniel Bellinger and Saquon Barkley more than James in this game.

FanDuel and BetMGM price this Under at -136 and -135, respectively. The -111 number at Caesars just looks like a great deal to us! Let's take James to stay Under 4.5 catches!