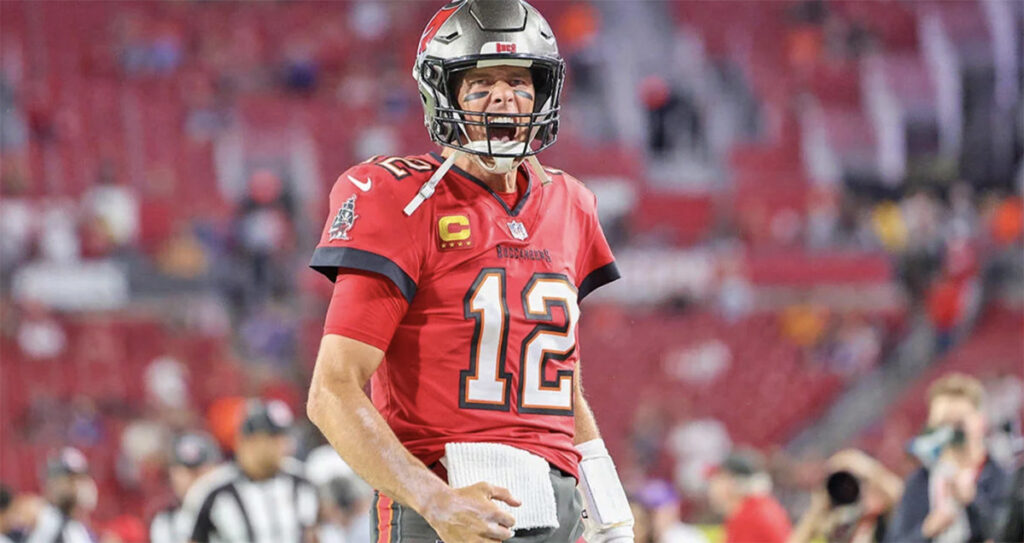 We're taking Brady over his passing and rushing props in our week 9 picks.

With 6 teams on byes, the NFL week 9 main slate features just 10 games. This includes just two games in the afternoon slate, both featuring NFC West teams (Seahawks at Cardinals and Rams at Bucs).

Despite the smaller slate, we were still able to find 11 player props worth considering on Sunday. Our props went an even 7-7 last week, but we did cash a nice +240 Latavius Murray anytime TD ticket. Let's start this week's picks off with our favorite anytime TD props for Week 9.

Mostert has solidified himself as the #1 back in the Dolphins backfield with Chase Edmonds falling into a 3rd down back. He did not reach the endzone last week against Detroit after scoring against Pittsburgh on a reception and then 2 weeks prior on the ground against the Jets. He faces the Bears this week who are last in the league in allowing rushing touchdowns. Chicago has seen the ball cross the endzone on the ground 14 times already this year. Mostert will look to add to that number.

The Packers, while taking the loss, were able to establish a strong run game throughout the game last week against the Bills. Jones has just 1 touchdown on the ground this season and 3 others through the air. He faces the Lions who are 2nd worst in the league in touchdowns to running backs. We believe Jones will get rewarded for his hard work last week with a touchdown this Sunday.

Conner is finally healthy and has a great matchup for his return. The Seahawks have allowed 11 touchdowns on the season on the ground. Conner has always had a nose for the endzone and if the Cards are in the redzone or tighter, we expect Conner to reap the benefit of multiple shots at scoring.

Carr has thrown just 5 interceptions through 7 games this season. That number is a bit inflated from the 3 he threw in week 1 but he is coming off a game against the Saints where he added to his total. He faces an opportunistic Jaguars defense that has 8 picks on the year and will be looking to flip the field with one this Sunday.

This game could turn into a shootout and that would be perfect for this play. Quietly, Brady has quietly been racking up yardage per game and is 6th in the league among QBs with 4 or more starts on the year. He is averaging over 280 yards per game. The Rams have been holding teams to under 220 yards per game through the air but that changes this week.

We took and cashed this play last week and will be riding it again Sunday. Geno continues to be cautious with the ball and this week he faces a Cardinals team that has just 5 interceptions on the season. He stayed clean against the Cards in their 1st matchup and we believe he will do the same again here.

Swift has been quiet since being injured earlier this season. However, this could be a spot where he breaks out once again. The Packers are one of the worst defenses against the run this season and have allowed over 140 yards per game on the ground. While Swift has not gotten many opportunities, he will need to break just 1 run to go over this total.

Brady has gone over this total in back-to-back games. He is one of the best QBs ever to run the sneak successfully. If he needs a yard, he’s going to get it. We are rolling the dice on the chance that he does it for the 3rd straight week.

White has taken over the role of catching the ball out of the backfield for the Bucs in recent weeks. He has made the most of his limited chances with the ball in his hands and is Brady’s check down option on 3rd down. He will still get a couple of carries that will allow him bonus opportunities to break a longer one but we believe he may be able to reach this total on receiving yards alone.

Ekeler is averaging 51 yards per game through the air this season. He went off last week for 96 receiving yards. He is facing the Falcons on Sunday who are allowing the most passing yards per game over 300 yards per game. We believe Ekeler will go for a tick over his average in this game as the Falcons are susceptible to the passing attack.

What Sportsbook Has the Best Week 9 Odds?

For the 7th time in 9 weeks, DraftKings has the best player prop odds. They also have the best promo code offer in the industry, with every new player getting $200 in free bets.

BetRivers Sportsbook continues to impress with its generous props odds. The little sportsbook that could doesn't offer odds on all of the wagers listed here, but still had the best available odds for 2 of our props and was the runner-up for 3 other picks.

Best of luck with all of your NFL Week 9 prop action!