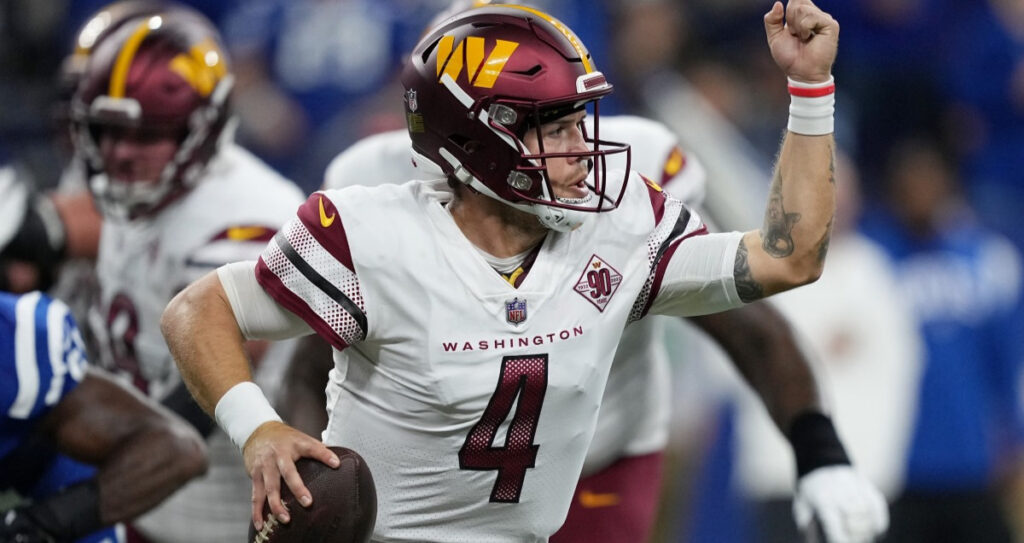 Taylor Heinicke is a key piece of our DFS lineup for the NFL Week 9 FanDuel Sunday Million.

Just as the halfway point of the season hits, our DFS lineup for Week 8 found its way into the money. After focusing our lineup on strength at the receiver position, we hit pay dirt. AJ Brown, DeAndre Hopkins, and DJ Moore scored in the top five at their position and were three of the top 15 players across fantasy football this week.

Those three players alone combined for 89 points. The rest of our lineup was buoyed by the Eagles' defense, Miles Sanders, and Mike Gesicki to bring our final tally up to 152.68 points.

We will eagerly ride that wave of momentum into a Week 9 DFS slate that has a lot of opportunities to find some value. FanDuel’s big Sunday contest for this week, the $1.4M Sunday Million, includes a top prize of $250,000. Let's get to our lineup!

You just can’t count out Taylor Heinicke. He led Washington in passing and rushing last week, scoring a touchdown through the air and on the ground, and mounted a fourth-quarter comeback victory on the road in Indianapolis.

That performance landed Heinicke in the top eight of quarterback scoring for Week 8, and he gets a nice matchup against a Minnesota Vikings secondary this week. This could be Heinicke's best week yet!

Jones has dispelled any thoughts of a backfield committee in Green Bay for the time being, out-touching AJ Dillion 68-31 over the Packers’ last four games. In a welcoming matchup against the Lions, Jones should see plenty of scoring opportunities.

Allgeier has emerged at the top of the Falcons’ backfield since Cordarrelle Patterson’s injury, racking up 61 touches in the last four games compared to Caleb Huntley’s 46. The Chargers allow 5.7 yards per carry, the most in the NFL, and will provide Allgeier with running lanes galore.

Since returning from his suspension, Hopkins is WR1 in half-point PPR scoring. He’s racked up 27 targets, 22 catches, 262 receiving yards, and caught a touchdown in two weeks, and will be Kyler Murray’s go-to option again in Week 9.

Terry McLaurin struggled in the first six weeks of the season with Carson Wentz under center but has strung together some nice performances since Heinicke has been back in the lineup. He’s WR8 across the last two weeks and faces a Vikings team allowing 275 yards passing per game in 2022.

St. Brown is the least proven commodity in the group in terms of recent performance. Since his injury in late September, he’s managed just 15.1 fantasy points in three full games played.

Against a difficult Green Bay secondary, we’ll buy low on his stock in the hopes of a correction in performance. He saw 10 targets in the Lions’ Week 8 loss to Miami.

Engram has quietly been performing as TE6 across the last four weeks of games and has been targeted 29 times during that period. The Raiders allow more than 255 yards per game through the air and have allowed the third-most passing touchdowns in the NFL this season.

Boyd caught a touchdown for the second straight week despite Joe Burrow’s lackluster performance on Monday night and will continue to see an increase in targets with JaMarr Chase sidelined. Carolina just allowed three touchdowns to Marcus Mariota and the Falcons, and we expect the Bengals’ offense to bounce back at home.

Miami will face a Bears’ team that has been wildly inconsistent on offense this season and the weather, namely the wind, looks to be a factor this Sunday. In a low-scoring affair, the Dolphins’ will be able to hold serve for our lineup at this discounted price.