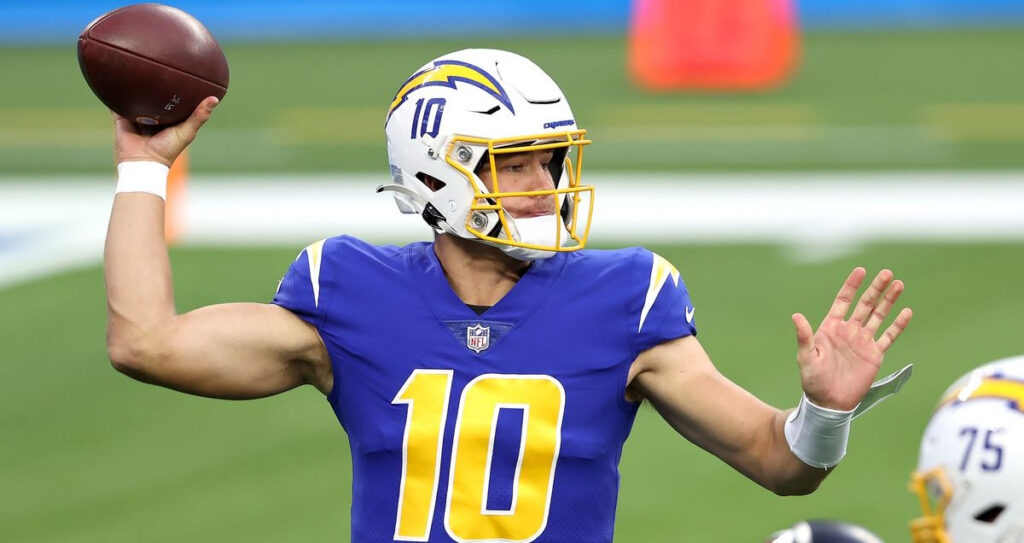 We think Justin Herbert will put up some huge numbers against a suspect Atlanta secondary in Week 9.

In sports betting, sometimes you're just on the wrong side of things. That's exactly what happened to us last night with our player prop bets, as they stumbled to a 1-3 mark. The Bengals' offense never got going, which meant that our Over bets on Joe Mixon and Tee Higgins weren't even close to hitting.

We played Amari Cooper Under 4.5 receptions and he promptly hauled in 5 of them. The only thing that kept us from an O-fer was cashing our Jacoby Brissett Under 19.5 completions ticket. Oh well, time to move on with 4 PrizePicks props picks for NFL Week 9.

This game should be a track meet between the Chargers and the Falcons. Herbert should feast on an Atlanta secondary that ranks 30th in yards per pass allowed and 29th in defensive EPA per pass. Los Angeles is coming off a bye and should be focused and well-rested.

Our hope is that the bye week also helped the Chargers' receiving corps get a little healthier. If Keenan Allen and Joshua Palmer can play on Sunday, Herbert shouldn't have any trouble throwing for 300+ yards.

Through 7 games this season, Herbert has exceeded this passing yardage total in 5 of them. We love that the Chargers can't run the ball very well and that the Falcons are slightly above average against the run. If the Chargers want to win this one, they'll have to air it out, which makes us love this Over even more.

It's amazing to see what Pete Carroll has done with this Seattle squad. Most folks had them pegged as one of the worst teams in the league and Carroll as a washed-up coach. Nothing could be further from the truth.

Geno Smith looks like he did way back in his West Virginia days. He's making plays and a lot of good decisions, which is the main reason why Seattle ranks 9th in EPA per pass.

Smith and Tyler Lockett shouldn't have a hard time connecting against an Arizona secondary that ranks 26th in defensive EPA per pass and 23rd in yards per pass allowed. With DK Metcalf attracting lots of attention, Lockett should be able to find some holes in the Cardinals' weak zone. Take the Over!

It's been more regular season Lenny than playoff Lenny of late. Fournette has seen his number of carries decline sharply over the last two weeks. The former LSU star only got 9 carries last week and only 8 against the Panthers in Week 7.

The bad news is that things may only get worse for the Bucs' running game, especially since the Rams rank 8th in EPA allowed per rush. Tampa Bay's O-line is a complete train wreck and they miss center Ryan Jensen in the worst kind of way. We don't see them generating any kind of push against this Rams front 7.

Fournette has been splitting time of late with rookie Rachaad White, who is a more elusive back and is more of a weapon on 3rd down. If Fournette gets 12 carries or less in this game, it's going to be very difficult for him to go Over this total.

We are pretty big fans of Stevenson, but this is a tough matchup for him against Indianapolis. The Colts front 7 is nasty and they rank 3rd in yards per rush allowed (4.0). They also rank 6th in defensive EPA per rush.

Stevenson did pretty well against the Jets last week but he was only on the field for 63% of the Patriots' snaps. His workload could get even less as former starter Damien Harris works his way back from injury.

The former Oklahoma standout has only played against the Colts once in his career. He only rushed for 36 yards in that contest. We see a similar outcome for Stevenson on Sunday. Let's ride the Under!

Best of luck with all your Week 9 NFL action! Let's get back to winning!