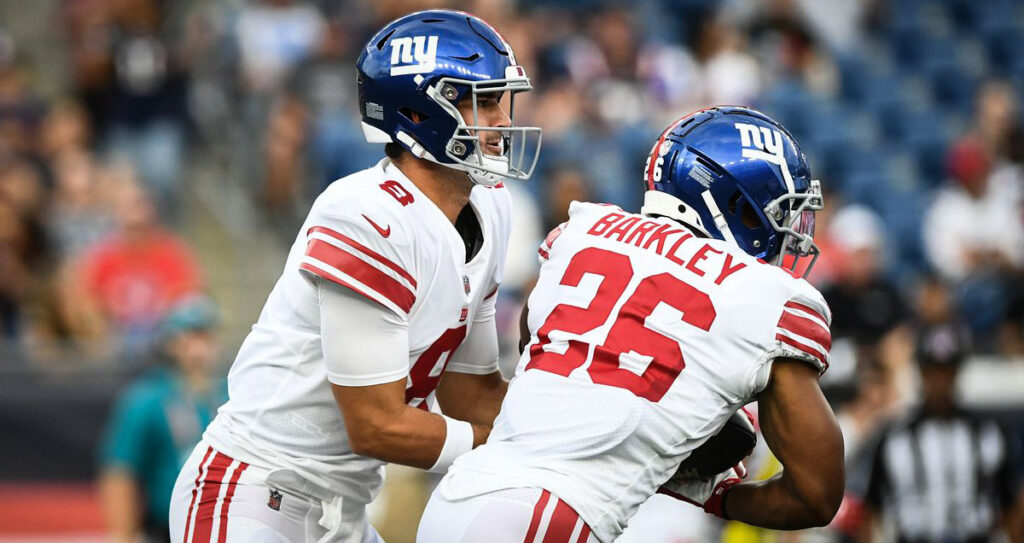 The Giants are one of four underdogs that made our best bets for week 7.

The NFL week 7 slate got off to a hot start with an entertaining Thursday night game between the Saints and Cardinals. Looking at Sunday's main slate, there are plenty of marquee matchups to keep an eye on. The slate is capped off with a 4:25 game between the Chiefs and the 49ers. Will we see Christian McCaffrey make his 49ers debut?

We've picked through the entire Sunday slate of games and have our 4 best bets for week 7. We're taking the points and rolling with four underdogs this week!

The Giants are off to a hot start in the most competitive division in the NFL. They are currently 5-1 and are on a current 3-game win streak. They are coming off a 24-20 win over the Ravens where they trailed 20-10 with less than 7 minutes to play. Daniel Jones hit Daniel Bellinger for an 8-yard touchdown and then following an interception of Lamar Jackson, Saquon Barkley punched one in with just under 2 minutes to play. The next Ravens possession ended quickly as Kayvon Thibodeaux strip-sacked Jackson to seal the game. It has been the defense and the run game that has propelled the Giants. They are 7th in allowing just 18.8 points per game and 4th in rushing offense averaging 163 yards per game.

The Jaguars have been a very underachieving 2-4 team this season. After a 2-1 start, they have dropped 3 straight games. Trevor Lawrence hit Christian Kirk for a touchdown that took the lead with just under 3 minutes remaining 27-26. Unfortunately for the Jags, Matt Ryan led the Colts down the field and connected with Alec Pierce on a perfect 32-yard pass to win the game. The Jags have 7 interceptions on the season which is 5th in the league and have been a top-10 rushing team all year long.

This line does seem pretty trappy as the 2-4 team is favored over the 5-1 team, but we just can’t trust these Jags this season. They just find ways to lose games and they will likely do the same here. That said, this Giants' defense is no joke and will give the Jags' offense a really tough time moving the ball downfield. The Giants win this one on the road and finally get a little respect.

Green Bay is just 3-3 and is coming off a brutal 27-10 loss to the New York Jets at home last week. This game begins a 3-game road trip for the Packers that will likely determine the fate of the rest of their season. They are 3rd in the league in time of possession per game while maintaining a decent rushing attack. Aaron Jones and AJ Dillon are averaging just over 120 yards per game on the ground but Aaron Rodgers has just not found the rhythm with his receivers yet.

The Commanders are 2-4 on the season and snapped a 4-game losing streak last week with a 12-7 win on the road in Chicago. They lost Carson Wentz for a couple of weeks due to a hand injury, so enter Taylor Heinicke. Rookie Sam Howell will serve as 2nd string but Heinicke has shown in the past that he can get the job done. The offense has been struggling to score, averaging just 17 points per game.

We believe that Wentz has been the biggest issue for the Washington offense and Heinicke will be the spark that they need to get the offense going a bit more. They won’t turn this entire season around but we do believe catching points here at home to a very mediocre Packers team is the right play here.

The 1-3-1 Texans are coming off their 1st win of the season which came on the road against the Jaguars. Tied at 6 late in the game, Dameon Pierce broke off a 20-yard run and then ultimately punched it in to take the lead and ultimately win the game 13-6. Pierce has been stellar over the last 3-games, averaging just over 100 yards per game. The defense has been decent allowing just under 20 points per game. They have picked off the opposition 6 times which is 7th in the league.

Vegas also has just 1 win this year, and it came at home against the lowly Broncos. They are coming off a 30-29 loss to KC 2 weeks ago. Down 7 with under 5 minutes remaining, Carr hit Adams on a 48-yard strike to close within one prior to going for 2 and failing to get Josh Jacobs into the endzone for the 2-point conversion. They have had over a week to think about that loss and prep for these Texans as they were on their bye week last week.

Both of these teams are awful and that said, we will be taking the points in this one. Vegas has so much talent but just has not been able to get things heading in the right direction and with no real sign of doing so in the near future. Dameon Pierce will look to continue his strong rushing attack and should be enough to stay within the number here.

Kansas City is 4-2 on the season and is coming off a 24-20 loss to Buffalo at home last week. They were leading 20-17 with just over 1 minute remaining before Josh Allen found Dawson Knox for a 14-yard touchdown to take the lead and win the game. Mahomes threw 2 interceptions at very inopportune times in this game and was sacked 3 times. They are top in the league averaging almost 30 points per game and are 2nd in 3rd down conversion percentage at 50%.

The 49ers are 3-3 after losing a tough matchup on the road to Atlanta 28-14 against a Falcons team that is much better than the public is giving them credit for. They came back from being down 14-0 early to tie the game midway through the 2nd quarter. The offense got completely shutdown after that and was unable to score any more points the rest of the way. They are 2nd in the league in allowing teams just under 15 points per game and have gotten to the QB 23 times for sacks which is also 2nd in the league.

This is a typical offense vs defense matchup here and we will also side with the defense in these matchups. The reason being that any points scored by the more defensive-minded team put so much added pressure on the opposing offense to put up points to counter immediately. Turnovers will surely play a part and the constant pressure that the 49ers' defense will put on Mahomes will be the difference in this game.