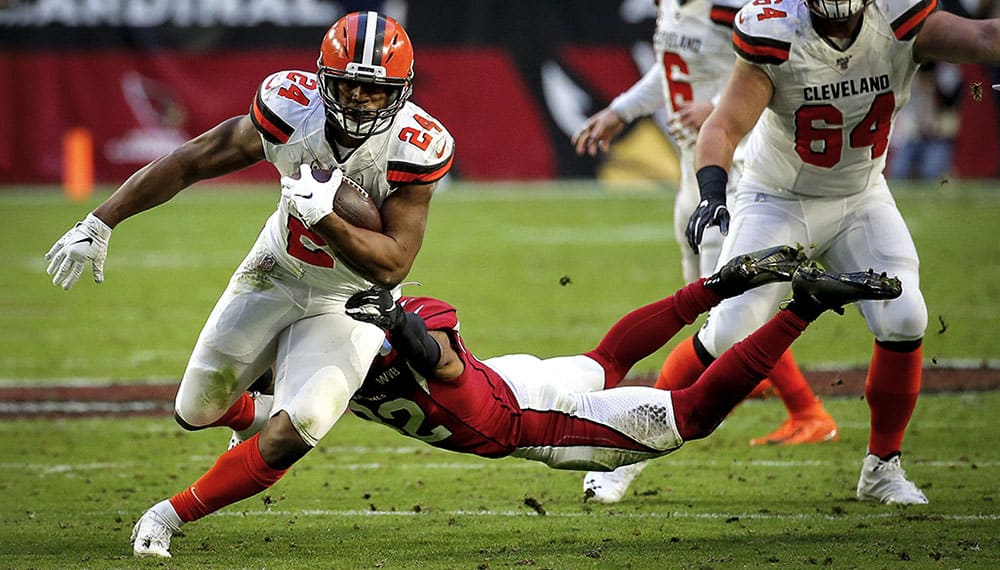 The NFL Week 6 has no shortage of headline matchups. The week kicks off with a Thursday Night game featuring Brady in primetime again. The Eagles head to Tampa looking to build off their Week 5 win.

While we doubt many people are going to set their alarms for this one, the Dolphins and Jags will square off in London at 9:30 AM. The 1 PM slate has one matchup that really stands out with the Chargers traveling to Baltimore.

Things really pick up in the 4 o'clock window with the Arizona Cardinals at the Browns, Cowboys at the Patriots, and Raiders at the Broncos. The Sunday Night game this week features the Seahawks at the Steelers, while the Bills will travel to the Titans for Monday Night Football.

PointsBet is offering all new players an instant $200 bonus with any $20 NFL or CFB wager. Here is how the offer works:

Our Picks for Best Bets Available for NFL Week 6

We think the over will be a popular public bet in this matchup but would caution that we think the Bucs could grind the clock with long drives against Philly's soft cover 2 heavy defense. On the other side, with zero running game, we think Hurts could be under a ton of pressure and think the Eagles struggle to move the ball. We like the Bucs to cover on the road.

If Baltimore loses on Monday night this matchup should set up perfectly for a bounce-back/let-down game, but we aren't taking the bait. Justin Herbert might be the best player in the NFL right now and HC Brandon Staley's defense and analytical approach fit perfectly with Herbert's game. Give us the Chargers moneyline on this one.

If Minnesota couldn't get to 20 points against a Lions team that is playing without their top 4 corners, and all 4 starting linebackers, they have no chance against the Panthers defense that is currently the #4 DVOA defense in the NFL. The Vikings' defense has looked better since giving up 60 points in the first two weeks, but we think Darnold (with a healthy McCaffrey) finds a way to get the win here in week 6.

The Chiefs look like a lock to bounce back in NFL week 6. If you look at the teams that were able to beat the Chiefs over the last three weeks, it took two of the league's best secondaries with opposing offenses that could keep pace with Mahomes. The Washington secondary has allowed just under 1,500 yards with a 14/2 TD/INT ratio through five weeks. Heinicke has been great, but he is no way near the level player that Justin Herbert and Josh Allen are. The Chiefs cruise here and easily cover the 6.5 points.

It is always risky picking against a team that is 5-0 overall and 4-1 ATS (covering by 10+ PPG) but we think this is the week Arizona suffers a loss. Arizona has one big-time win this season at the Rams but benefited in that one from getting Los Angeles away from the run early. We don't see that happening against this Browns team who put up 230 rushing yards (6.6 YPC) and 531 total yards against the Chargers last week. Admittedly, we are likely going to wait for this line to move throughout the week, but as it sits right now, we like the Browns.

This is another week 6 matchup we expect to see plenty of 'let down game' talk... no chance. It would be one thing if this Titans team was good, but this is a bottom-six team in the NFL. This defense may be the worst in the NFL... through five weeks they are allowing over 26 PPG despite playing the Jaguars, Jets, and Colts (during Wentz's double sprained ankles week). The Titans will want to give Henry 30+ carries in this one, but the Bills have the league's fourth-best rushing defense and Henry has already been held to 4 YPC or less, without a touchdown, against the Colts and Cardinals. Give us the Bills and we will gladly lay only 4.5 points.