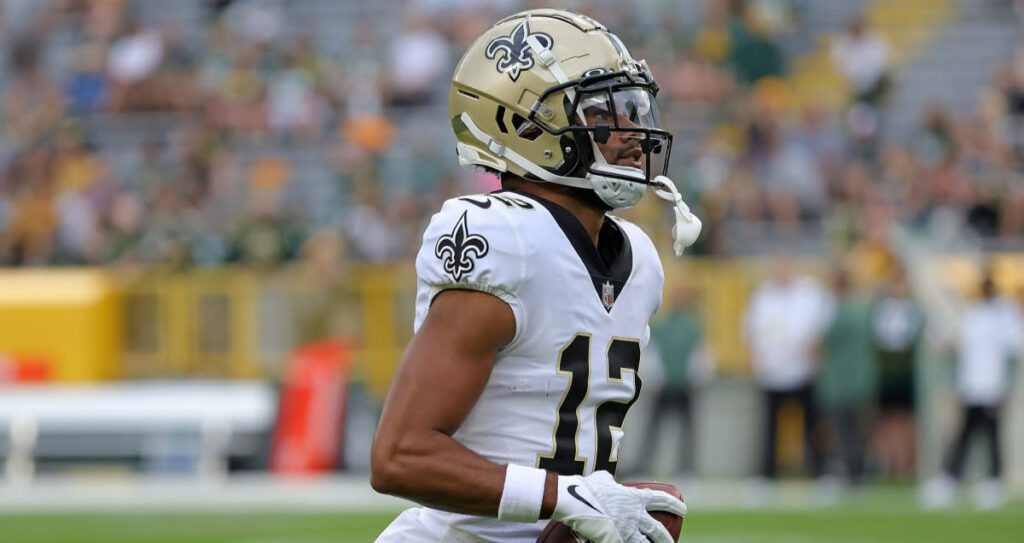 Saints WR Chris Olave is a big part of our NFL Week 5 lineup strategy for the FanDuel Sunday Million.

Last week’s lineup we submitted ended up with a total of 108.84 points, led by Dameon Pierce and Christian McCaffrey with 21+ point outputs each. The big disappointment came from the receiver group where Amari Cooper and DeVonta Smith combined for 4.6 points in a massive letdown.

We found value at tight end (Pat Freiermuth’s 12 points) and defense (Dallas’ 10 points), but could not overcome the duds from Cooper and Smith. This week, we’ll be jumping back into the $1.75 million contest at FanDuel where the winner earns $300k.

Tannehill has been consistent this season with the exception of Tennessee’s brutal loss to Buffalo in Week 2. He scored 14.4 points on the road against a tough Colts defense last week and gets a matchup against a bottom ten defense with little home-field advantage in Washington for Week 5.

There's no reason to think that Tannehill won't have a productive day this Sunday. Look for Tannehill to boost his numbers by hooking up with Robert Woods on some deep play action passes.

Dalvin Cook has become a forgotten fantasy football commodity after a batch of forgettable performances to start this season. Despite not living up to his ADP in season-long leagues, he still has gotten 17+ carries in three of four games and has a Week 5 matchup against a Bears defense that is dead last against the run in 2022.

Harris has a rushing touchdown in three straight games and has amassed 49 touches in that timeframe. That stretch came against Pittsburgh, Baltimore, and Green Bay.

This week, Harris and the Pats host the Detroit Lions, who have allowed the most rushing touchdowns in the NFL through four weeks. Harris should feast against them as long as he stays in the 15-20 touch range.

Brown and the Eagles receivers have benefited from some easy matchups in the first four weeks, and this has allowed him to establish a great rapport with quarterback Jalen Hurts. He’s racked up over 400 yards receiving in that time, and that’s unlikely to slow down against the Cardinals in Week 5.

Deebo Samuel has scored double-digit fantasy points in every game this season and has 70 or more receiving yards in both games that Jimmy Garoppolo has started. Carolina has been stingy against the pass this season, but Samuel is more than just a receiver in this offense.

Chris Olave has 33 targets in his last three games and caught his first touchdown last week with Andy Dalton under center. That amount of volume combined with Michael Thomas’ injury makes him a strong value at less than a $7k cap number.

Knox has been off to a slow start in 2022 after catching five touchdowns in the first five games last season. He’s gotten 15 targets since Week 2 and seems to be getting more looks in the red zone in the last few weeks. At this price, we’ll take a flier on Knox to score his first touchdown of the season in a home game against Pittsburgh.

Hunt was quieted down in Weeks 2-4, and his cap number has dropped as a result. He’s averaged over 14 touches per game regardless and has a matchup against the Chargers that has been friendly to opposing running backs. We like Hunt to cash in on this matchup at a discounted price.

The 49ers have a road date with the Panthers in Week 5 and that bodes well for their stingy defense. They’re averaging over 10 points per game through four weeks and face Baker Mayfield a week after he threw two interceptions and lost a fumble against the Cardinals. We won’t overthink this one.